This website requires the use of Javascript to function correctly. Performance and usage will suffer if it remains disabled.
How to Enable Javascript
Brexit’s Two-year Countdown 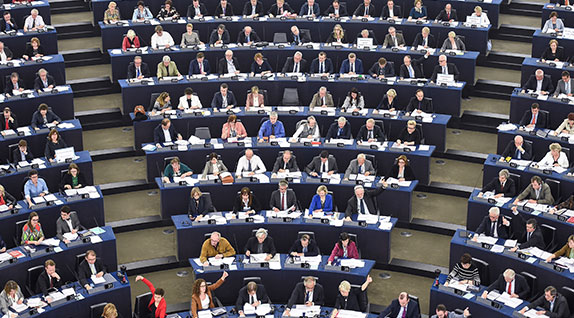 The relationship between the United Kingdom and the European Union will be tested throughout the next two years as they work together to make Britain’s transition out of the EU as smooth as possible.

Since Article 50 of the Lisbon Treaty was invoked at the end of March, which officially started the countdown to the UK’s EU departure, it is clear this will be a long and difficult road.

“For the next two years, there will be discussion, debate and most probably disagreements as EU and UK negotiators attempt to reach an agreement on the country’s relationship with the bloc,” The Week reported.

Negotiators for each side will attempt to cut a deal that will meet both of their needs.

“Unpicking 43 years of treaties and agreements covering thousands of different subjects was never going to be a straightforward task,” BBC reported.

“It is further complicated by the fact that it has never been done before and negotiators will, to some extent, be making it up as they go along.

“The post-Brexit trade deal is likely to be the most complex part of the negotiation because it needs the unanimous approval of more than 30 national and regional parliaments across Europe, some of whom may want to hold referendums.”

For her part, Britain’s Prime Minister Theresa May has already made clear what her nation’s priorities will be. 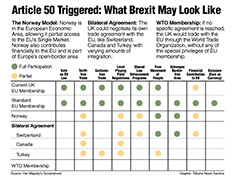 In a January 2017 speech, she laid out 12 points indicating Britain’s desire to establish independence from the bloc on issues such as immigration, lawmaking and trade. She stated: “Brexit must mean control of the number of people who come to Britain from Europe,” “Leaving the European Union will mean that our laws will be made in Westminster, Edinburgh, Cardiff and Belfast,” and, “It is time for Britain to get out into the world and rediscover its role as a great, global, trading nation.”

Other points indicated that Mrs. May intends to maintain strong ties with the EU: “We will pursue a bold and ambitious Free Trade Agreement with the European Union,” “We will welcome agreement to continue to collaborate with our European partners on major science, research and technology initiatives,” and, “We will continue to work closely with our European allies in foreign and defence policy even as we leave the EU itself.”

In a separation letter sent to European Council President Donald Tusk in March, Mrs. May added that the EU and the UK must maintain a “deep and special partnership.” While she said the move was made “to restore, as we see it, our national self-determination,” she also emphasized that “we are not leaving Europe—and we want to remain committed partners and allies to our friends across the continent.”

Now that the article of the treaty has been invoked, the UK and EU are expected to reach an overall agreement by March 2019.

One of the first areas in which they will need to reach a consensus is the matter regarding outstanding payments. European Commission President Jean-Claude Juncker expects the UK to deliver 50 billion British pounds to the Union before talks can continue. The EU has already allocated these funds for future spending.

Yet Brexit secretary David Davis told the BBC that the UK would “meet our international obligations, but we expect also our rights to be respected too.”

“I don’t think we’re going to be seeing that sort of money change hands,” he said.

Other major areas in which the two will have to reach a consensus are the status of EU nationals living in the UK and the UK’s future trading relationship with the European power bloc.

“The treatment of EU nationals post-Brexit will be one of the first, and potentially most controversial, parts of the eventual talks,” The Week reported, as “neither [side] will want to be seen as persecuting people who have made their life in another country.”

The European Commission “said it was presumed that UK promises to protect the rights of EU nationals already in the country would include the right for those who have previously lived there to return, and for current and future spouses and dependants to join those already in the country,” The Guardian stated.

Regarding trade, Mrs. May “has said Britain aims to leave the single market and most of the customs union in favour of agreeing a bespoke free trade deal for individual industrial sectors such as the automotive and pharmaceuticals industries” (ibid.).

However, EU guidelines state a non-member “cannot have the same rights and enjoy the same benefits as a member” and “there can be no ‘cherry picking.’” This would prevent the UK from making trade deals with individual member states.

At the end of April, President Tusk convened and chaired a meeting of the EU’s 27 prime ministers and presidents to establish the EU’s position before talks with the UK.

During the next nearly 24 months, EU law will still stand in the United Kingdom until it ceases being a member. In addition, Britain will continue to abide by EU treaties and laws, yet not take part in any decision-making.

The UK will officially separate from the EU on March 29, 2019. Both parties, along with each EU member state, must formally agree to the terms within that time.

Mr. Tusk stated that talks would be “difficult, complex and sometimes confrontational,” but that the bloc would not seek to punish Britain.

“The task before us is momentous but it should not be beyond us,” Mrs. May stated in her letter to Mr. Tusk in March. “After all, the institutions and the leaders of the European Union have succeeded in bringing together a continent blighted by war into a union of peaceful nations, and supported the transition of dictatorships to democracy. Together, I know we are capable of reaching an agreement about the UK’s rights and obligations as a departing member state, while establishing a deep and special partnership that contributes towards the prosperity, security and global power of our continent.”