This website requires the use of Javascript to function correctly. Performance and usage will suffer if it remains disabled.
How to Enable Javascript
2016: Bleak Forecast for Global Economy? 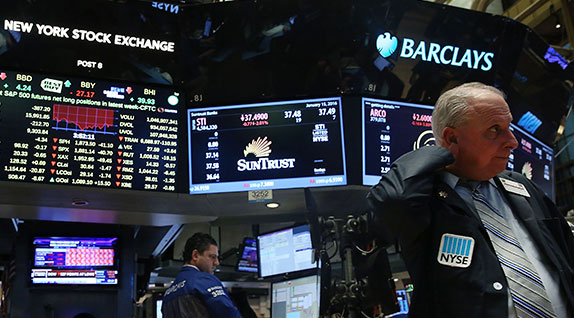 After years of being held hostage at the gas pump, consumers in certain parts of the world are sighing in much-needed relief due to plummeting oil prices. Despite a few more dollars in consumers’ wallets, however, analysts, economists and pundits alike warn that the world is in for a rollercoaster ride of economic unpredictability for 2016 and beyond.

NPR wrote that investment firm “Goldman Sachs now predicts that those negatives will offset the benefit to U.S. consumers, so lower oil prices won’t be a boost to the economy this year.”

The Guardian’s economics editor wrote this forecast for 2016: “At some point, a recovery built on booming asset prices, weak growth in earnings and rising personal debt is going to lead to another huge financial crisis—but not in the next 12 months.

“Instead, 2016 will be a year of living dangerously, papering over cracks and buying time before all the old problems resurface.”

“This is a case of history threatening to repeat itself, because the buildup to the 2008 crisis began on the periphery of the global economy. So, here is my final prediction: there will be no explosion in 2016, but a fuse will be lit.”

In addition, a Council on Foreign Relations article that appeared in The Atlantic stated: “The world will face economic challenges on multiple fronts in 2016. As the U.S. Federal Reserve begins its monetary tightening, Europe is struggling to manage migrant and debt crises, China’s financial stability is in doubt, and emerging economies are increasingly fragile.”

As an emerging superpower, the health of the massive Chinese economy causes ripple effects across the globe. In addition, China must perform a delicate tightrope act. It is balancing itself between maintaining a communist regime and tolerating and even encouraging capitalism, albeit in limited forms. Shop for sneakers, a television, or a computer in the West and you will likely end up with a product labeled “Made in China.”

Walmart is the world’s largest retailer—and is China’s most important supplier. “If Wal-Mart were an individual economy, it would rank as China’s eighth-biggest trading partner, ahead of Russia, Australia and Canada,” said Xu Jun, Walmart China’s director of external affairs (China Business Weekly).

China’s ambitions to making money in a free market is not limited to just manufacturing cheap consumer goods.

“Over the past decade, China has built factories and expanded its manufacturing capacity in the expectation that the United States and Europe would continue to demonstrate a robust appetite for Chinese-produced goods. But western demand for Chinese products slowed in the wake of the financial crisis, leaving the Chinese economy with substantial overcapacity in manufacturing” (Australia’s Business Spectator).

Yet there are other weak points in China’s economic armor: “In recent years, China’s growth has come heavily from massive infrastructure investment; China poured more cement and concrete between 2011 and 2013 than the US did in the whole of the 20th century. This, too, is unsustainable. Even if it is replaced by domestic services, China’s contribution to demand for global commodities will fall” (Financial Times).

ChinaFotoPress/Getty Images
Tumbling numbers: An investor observes the stock market at an exchange hall in Fuyang, China, during a volatile day of trading (Jan. 13, 2016).

The International Monetary Fund downgraded its global economic growth forecast for 2016 to only 3.4 percent and 3.6 percent in 2017.

Much of this hinges on China’s increasingly sluggish economy.

“The IMF forecast that growth in China will further slow to 6.3 percent this year and fall to 6 percent in 2017—below Beijing’s official target for the pace of expansion,” The Washington Post reported. “Many analysts are skeptical of the country’s estimates of growth, and some fear its economy is in much worse shape than officials are willing to acknowledge.

“China’s boom had been built on exporting its low-priced goods around the world, driving domestic investment in factories, equipment and infrastructure. China’s seemingly insatiable demand for raw materials also helped buoy resource-rich countries such as Brazil and Zambia.

“Now the tide is turning.”

It is only logical to ask: If China falls into a recession, will it drag the rest of the world with it?

To learn more about what the coming years will bring for the world’s largest nation, read “China’s Hazy Future” in this issue of The Real Truth.

Aside from China, there are a number of other economic factors to watch in 2016.

Yet there are worries of what will happen if the United Kingdom exits the European Union. Prime Minister David Cameron has promised a popular vote on whether the nation should remain in the power bloc. There are indications that this could be held in June or July of this year.

“The declining oil price is certainly not what we [economists] base our decisions on. And if the supply of oil is to decline, it should be the countries that increased their production while we were under sanctions that should scale back now—they should let Iran have its share of the market.”

Many worry this will further cripple the global oil market.

The analyst group continued: “Tension with nearly all Russia’s neighbors (Europe, Turkey, Middle East, U.S., etc.) will keep its economy mired in recession and the continued price collapse of its key commodity exports will put pressure on Vladimir Putin—who will respond as he always does—by banging the nationalist drum and kicking up trouble on his borders (most likely next in Moldova). This should be enough to ensure he maintains his position (if not his popularity).”

The paper also stated: “His resignation comes amid mounting signs Japan’s economic recovery is faltering, raising pressure on its central bank to inject still more cash into the economy on top of its already massive monetary stimulus.”

Yet there are some bright spots on the economic landscape. The markets of Germany, India and the United States all are projected to perform fairly well during the remainder of the year.

Despite these few positive signs, the world economy is in rough shape—and will continue to be rocky unless substantial global changes are made.