This website requires the use of Javascript to function correctly. Performance and usage will suffer if it remains disabled.
How to Enable Javascript
World News Report: June 2015 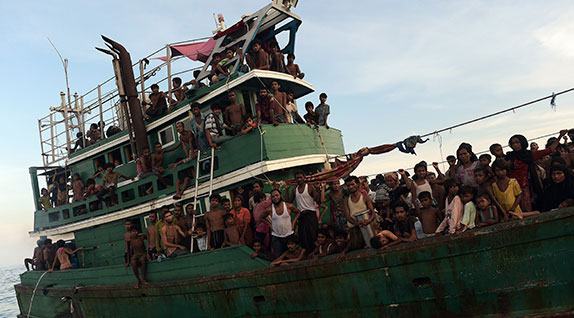 Christophe Archambault/AFP/Getty Images
Displaced: A boat crammed with scores of Rohingya migrants from Myanmar, many of them young children, was found drifting in Thai waters on May 14. Many of the passengers, who faced ethnic discrimination in their home country, died during the journey.

Mankind has almost reached the very end of the end of the age. While the world’s leading thinkers and planners continue to act as if life on planet Earth will go on as it always has, we know differently. Never have people on such a large scale looked and acted individually as if they were completely unprepared to handle almost anything out of the ordinary. Yet everything that is coming could not be further from ordinary. Conditions today are simply unsustainable. And no amount of money, time, effort, technology or any other resource could turn the tide for humanity. The Bible reveals that mankind would not survive without God’s supernatural intervention. Without Almighty God’s merciful deliverance, humans collectively would commit global cosmocide (Matt. 24:21-22)—and probably soon now.

Only after this world’s systems, structures and ways are completely torn down can Christ’s Millennial reign with the saints be ushered in and God’s kingdom be established. Until then, the world is being buffeted by unending and ever-growing problems.

The first example shows the widespread and tragic effects of war and violence on the many millions forced to flee their homes in its wake in just the year 2014. BBC News reported (emphasis mine), “A record 38 million people remain displaced inside their own countries through conflict and violence, a new report says. The figures published by the Norwegian Refugee Council (NRC) were described as the worst in a generation. Iraq, South Sudan, Syria, Democratic Republic of Congo and Nigeria had the most newly displaced people…Syria had the highest number of internally displaced people—people who remain in their homeland, as opposed to refugees, who cross borders. The report said 7.6 million people had left their homes because of the conflict, now in its fifth year—at least 35% of the population. Ukraine, which has seen fighting between pro-Russian separatists and government forces, appeared in the report for the first time, with 646,500 people internally displaced there in 2014. Last year, the UN said the number of people living as refugees from war or persecution had exceeded 50 million for the first time since World War Two. The total number of people affected worldwide dwarfs the figures seen at the peak of the Darfur crisis in 2004, the violence in Iraq in the mid-2000s, and in the wake of the Arab Spring uprisings in 2011…”

These numbers are sobering, but also heartbreaking, if you just think only of the children.

Then there is the Middle East. The recent nuclear framework deal between the West and Iran is causing a nuclear arms race in the region, and beyond anything that could have been anticipated. A quote sets this up: “French Foreign Minister Laurent Fabius said a possible nuclear deal with Iran risks sparking a nuclear arms race in the Middle East unless the agreement grants international inspectors access to Iranian military sites and other secret facilities. In an interview with The Wall Street Journal, Mr. Fabius insisted the ability to inspect such sites be part of a final agreement with Iran to ensure Tehran doesn’t covertly try to build a nuclear weapon…‘The best agreement, if you cannot verify it, it’s useless,’ said Mr. Fabius. ‘Several countries in the region would say, OK, a paper [has been signed] but we think it is not strong enough and therefore we ourselves have to become nuclear’” (The Wall Street Journal).

In a world of stunning headlines, the most stunning one that could possibly be imagined came from The Independent in Britain, reporting that the Islamic State (ISIS) could even “go nuclear”: “India’s defence minister has voiced concern that the radical Islamist group Isis could obtain a nuclear weapon from ‘states like Pakistan.’ Rao Inderjit Singh made the comments on the sidelines of the Shangri-La regional security conference in Singapore…‘With the rise of Isis in West Asia, one is afraid to an extent that perhaps they might get access to a nuclear arsenal from states like Pakistan,’ Bloomberg quoted him as saying. Earlier in the month Isis suggested it could attempt to buy its first nuclear weapon within a year and that it might come from Pakistan…”

Then there is the now almost completely stagnant global economy. Notice the following longer quote. The headline reads: “Negative Interest Rates Put World on Course for Biggest Mass Default in History” (again, emphasis mine): “Here’s an astonishing statistic; more than 30pc of all government debt in the eurozone—around €2 trillion [2.2 trillion USD] of securities in total—is trading on a negative interest rate. With the advent of European Central Bank quantitative easing, what began four months ago when 10-year Swiss yields turned negative for the first time has snowballed into a veritable avalanche of negative rates across European government bond markets. In the hunt for apparently ‘safe assets,’ investors have thrown caution to the wind, and collectively determined to pay governments for the privilege of lending to them…”

“One by one, all the major central banks have joined the money printing party. First it was the US Federal Reserve. Then came the Bank of England and later the Bank of Japan. Just lately, it’s the European Central Bank. Now even the People’s Bank of China is considering the ‘unconventional’ monetary support of bond buying. Anything to keep the show on the road. It’s what Chris Watling of the consultancy Longview Economics has termed the ‘philosophy of demand at any cost.’ A crisis caused by too much debt has been fought with even more of the stuff” (The Telegraph).

Another article brought stunning warnings about the state of the world’s monetary system: “The world economy is disturbingly close to stall speed. The United Nations has cut its global growth forecast for this year to 2.8pc, the latest of the multinational bodies to retreat. We are not yet in the danger zone but this pace is only slightly above the 2.5pc rate that used to be regarded as a recession for the international system as a whole…Stephen King from HSBC warns that the global authorities have alarmingly few tools to combat the next crunch, given that interest rates are already zero across most of the developed world, debt levels are at or near record highs, and there is little scope for fiscal stimulus. ‘The world economy is sailing across the ocean without any lifeboats to use in case of emergency,’ he said” (The Telegraph).

Of course neither of these quotes so much as mention the hundreds of billions of dollars being piled up in personal debt by consumers in all the developed economies, where vast numbers have NO HOPE of ever getting out of debt because of the deeply entrenched culture of covetousness that drives millions and millions of personal decisions every day. (To learn more about this topic, read our eye-opening booklet End All Your Financial Worries.)

Finally, overall global instability and aggression have led to increased talk of World War III. Notice (emphasis mine): “…the “w” [war] word was mentioned again yesterday. This time in an editorial by a Chinese state controlled paper. Said the Global Times: ‘If the United States’ bottom line is that China has to halt its activities, then a US-China war is inevitable in the South China Sea.’

“It came as China’s government effectively declared a ‘no fly zone’ over the disputed waterway after warning the US over its ‘provocative’ aerial reconnaissance of several islands…[A] Chinese Foreign Ministry spokeswoman issued a formal protest at the United States’ actions in challenging its territorial claims…China is maintaining its stance that its aggressive construction work on disputed islands in South-East Asia is no different to building highways or public facilities anywhere else on the mainland. Such is its determination that these disputed territories are its own. Combined, the increasingly threatening talk is causing many to take notice: High-profile US Billionaire investor George Soros told the World Bank last week: ‘If there is conflict between China and a military ally of the United States, like Japan, then it is not an exaggeration to say that we are on the threshold of a third world war’…If China’s economy continues to falter, he said last week, ‘there is a real danger that China will align itself with Russia politically and militarily, and then the threat of third world war becomes real’” (News.com.au).

To learn more about these topics, read our booklet Are These the Last Days?