This website requires the use of Javascript to function correctly. Performance and usage will suffer if it remains disabled.
How to Enable Javascript
World News Report: May 2015 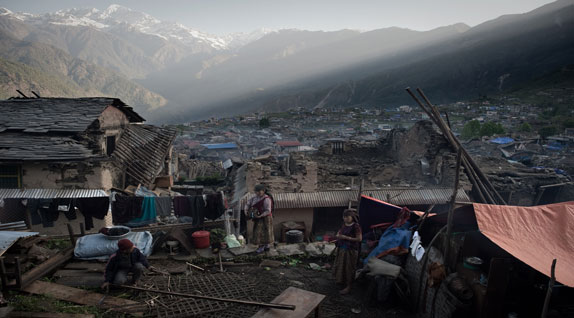 Nicolas Asfouri/AFP/Getty Image
Homeless: A villager constructs a makeshift tent for his family next to his destroyed house in Barpak, Nepal (May 4, 2015).

Surveying events from around the world, uncertainty abounds. Just one example is in Israel. Despite Prime Minister Benjamin Netanyahu winning an overwhelming majority of seats in the recent election, the job of forming a coalition became a significant, and almost impossible, struggle.

The Jerusalem Post reported this about the coalition-forming process: “‘As long as a government has not been sworn in by this Knesset, the mission has not ended,’ [President Reuven] Rivlin told MKs. ‘The public is suffering from this paralysis. Please complete the negotiations quickly, because the public is paying a heavy price day by day. Let us enable the government to return to function.’” He was ignored until the very last day before the process would legally collapse.

After long negotiations, however, a razor-thin coalition was finally assembled. The following was written right before this happened: “Prime Minister Benjamin Netanyahu made a significant step towards cementing his fourth government after reaching a coalition agreement with two key parties…a breakthrough was reached with Kahlon, and Netanyahu secured the support of the man everyone thought would be this election’s kingmaker. Meanwhile, talks with the Haredi party also bore fruit, and thus both parties will sign their collation agreement…making them the first to join the budding coalition (Ynetnews).

Two days before the deadline for Mr. Netanyahu to form a coalition, Avigdor Lieberman resigned from his post as foreign minister, declaring that he and his party (Yisrael Beytenu) would not be part of the new government. However, this still brings Netanyahu’s coalition to the 61 seats necessary for a majority. Incredibly, 59 seats will formally sit in legal “opposition” to the government. Welcome to the modern democracies of the world. Watching this process play out reminds me of the urgent need for God’s perfect, world-ruling supergovernment to be established as soon as possible! Soon all humanly devised forms of government will be outlawed forever, bringing peace, harmony and stability to those who have only known life under this world’s ineffective, failed and broken governments.

Once Mr. Netanyahu’s far-right government is formed, settlements may begin to move forward at a speed never before seen. This will of course further infuriate the current American administration, the European Union, the United Nations and all other governments and institutions critical of Israel’s settlement and “two-state” policies. Keep watching the Middle East closely! It will not end well and possibly about mid-summer when Israel may take matters into its own hands in response to the anticipated much-criticized nuclear deal with Iran scheduled to be finalized June 30.

In the United States, violent riots erupted yet again over race and relations with police, this time in Baltimore, Maryland. The Baltimore Sun recently reported, “Violence ruled Baltimore Monday night, after the funeral of Freddie Gray, with numerous fires breaking out around the city, several shootings were reported, and city schools and business closed. Gov. Larry Hogan declared a state of emergency, and will set up his department at an office in Baltimore…Police said 235 arrests were made overnight—201 adults and 34 juveniles. Twenty officers were injured in Monday night’s violence.”

City officials stated that the mobs were not just a spontaneous flash of anger but rather they were expressing feelings festering for a long time: “This latest eruption came after days of simmering tensions over Freddie Gray, who mysteriously died on April 19, a week after Baltimore Police arrested him. Anger over his plight may have spurred Monday’s violence, but Baltimore City Council Member Brandon Scott said it was also fueled by ‘a long, long, longstanding issue with young African-Americans…We’re talking about years and decades of mistrust, of misfortune, of despair that it’s just coming out in anger,’ Scott said. ‘No, it is not right for them to burn down their own city. But that is what’s coming out of these young people.’”

“President Barack Obama said Tuesday that ‘some police aren’t doing the right thing’ and that a lot of the tension between law enforcement and the black community stems from ‘a slow-rolling crisis’ that has been brewing for decades. Fixing it will require more investment in cities, criminal justice reform, better funding for education and soul-searching for some police departments, he said. Still, no angst can excuse what Obama called the behavior of ‘criminals and thugs who tore up’ Baltimore” (CNN). The unrest will most likely slow down now that the six police officers involved in the incident were charged by the state’s attorney.

In Nepal, a devastating 7.8-magnitude earthquake struck late in April. The enormity of death and destruction was truly sobering: “The death toll in Nepal’s earthquake could reach 10,000, Prime Minister Sushil Koirala has said, as survivors’ despair turned to anger at the government’s slow response to the humanitarian crisis unfolding in the country, with food, water and other essentials in desperately short supply…‘The death toll could go up to 10,000 because information from remote villages hit by the earthquake is yet to come in,’ Koirala said. In neighbouring India 61 people were killed and China’s official Xinhua News Agency said 25 people had died in Tibet…” (The Guardian). A second earthquake struck just days after the first, causing even more damage and hampering aid and rescue workers.

BBC News revealed that the natural disaster affected MANY MILLIONS of people (emphasis added): “The UN has estimated that EIGHT MILLION PEOPLE have been affected—more than a quarter of the population [of Nepal]. Foreign aid is arriving but being hampered by congestion at Kathmandu’s sole airport…The country’s most deadly earthquake in 81 years triggered avalanches that have killed 18 people on Mount Everest—the worst disaster in history on the world’s highest peak.”