This website requires the use of Javascript to function correctly. Performance and usage will suffer if it remains disabled.
How to Enable Javascript
World News Report: August 2014 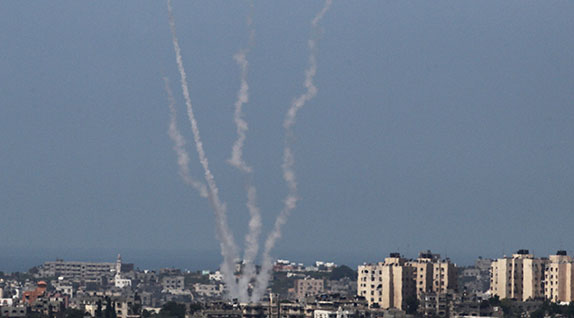 Newspaper headlines show the broken condition of man’s civilization on a daily basis. None could have expected the stunning ramp up in prophetic conditions just since I last wrote. I now break away to read news at least briefly at least once more per day after my morning and evening sessions at home doing this. What is happening around the world is TRULY SHOCKING! As I watch events, I wonder, how much time is left before this final era of mankind’s rule collapses at the Return of Jesus Christ? How many days, months and years can mankind possibly have remaining before world peace is forced on humanity? Every hour world conditions become more grim.

We start with the multiple crises in the United States. The emergency on the Mexican border has not gone away. Just the opposite! One sheriff in Arizona reported that in the Tucson sector alone, around 123,000 illegals were arrested. And while thousands are still streaming into the United States, the division between both political parties has never been more defined—with both sides “digging in” to their entrenched positions. The American President may use an “Executive Order” to grant amnesty to upwards of five million illegal immigrants. This action may result in the loss of the U.S. Senate in 2014 to the Republicans in order to win control of both houses and the presidency again for the Democrats in 2016. Related to this, the House voted recently to formally sue the President for abuse of executive power in regard to his unilateral changes to the Affordable Care Act—often called Obamacare.

A recent headline and article in the Los Angeles Times summarized the extraordinary legal action: “GOP-led House Votes to Sue Obama in First-of-its-kind Lawsuit: The House vote to sue President Obama is the first such legal challenge by a chamber of Congress against a president and a historic foray in the fight over constitutional checks and balances. Wednesday’s nearly party-line vote followed a feisty floor debate and offered a fresh example of how the capital’s hyper-partisanship has led both parties into unprecedented territory, going to new and greater lengths to confront one another.”

Only time will tell how this lawsuit will play out, but as the above article made clear, the United States is in “unprecedented territory”—uncharted waters.

In other parts of the world, a great prophecy in Revelation 6 is being fulfilled. The Four Horsemen of this chapter are picking up speed! Scores of news stories could be included proving that false Christianity, war, famine and disease are all advancing faster than ever—just think of the Ebola outbreak—but we only have space to cover the red horse of war. Evidence of this horseman’s ride can be seen in a big way in the Middle East, particularly in the most recent fighting between Israelis and Palestinians in the Gaza Strip. A few days ago, the U.S. Secretary of Defense, Chuck Hagel, opened his address (publicly) to the troops in Iraq by stating that “the whole world is exploding.” I heard him, and he is right. What an incredible statement from the man who leads the American military!

Although the tiny nation of Israel has long battled enemies on all sides, its current war is different. A USA Today article described five ways these hostilities are unique from previous ones. Much could be written about this war but space does not permit. For now, realize that a breaking point—what some are calling a “rupture”—is quickly coming in Israel’s relationship with America. (Those who know Bible prophecy understand that this will happen soon.)

Keep watching the Middle East very, very closely—especially the rise of the most horrific jihadists the world has ever seen, the Islamic State, which is taking over large swaths of Iraq and Syria. The brutality of this absolutely monstrous group is shocking the world. Notice this quote from France 24:

“Militants belonging to the Islamic State of Iraq and Greater Syria (ISIS or ISIL) have killed at least 500 members of the Yazidi ethnic minority, burying some victims alive in a mass grave found in northern Iraq, an official said Sunday. Iraq’s Human Rights Minister Mohammed Shia al-Sudani said news of the killings had come from people who had escaped from Mount Sinjar in northern Iraq, the ancient home of the Yazidis and one of the towns captured by the Sunni militants who view the community as ‘devil worshipers.’

“‘We have striking evidence obtained from Yazidis fleeing Sinjar and some who escaped death, and also crime scene images that show indisputably that the gangs of the Islamic States have executed at least 500 Yazidis after seizing Sinjar,’ Sudani said. ‘Some of the victims, including women and children were buried alive in scattered mass graves in and around Sinjar.’ He added that about 300 women had also been forced into slavery by the group which now calls itself Islamic State.”

The violence against Christians is causing Pope Francis to speak out more boldly: “On Sunday, August 10, John Hooper of The Guardian reported that Pope Francis spoke out against the way that militant Muslims in Iraq have been actively persecuting Christians and others for their religious beliefs…According to Hooper, ‘Pope Francis used unusually strong language to condemn the actions of Islamists in their continuing campaign against minorities in Iraq on Sunday and called for an end to violence in the name of God…In his traditional Sunday blessing, Francis said the news from the country had left him “in dismay and disbelief.”

“There have been…reports from Mosul, Iraq’s second largest city, ever since IS seized it. Leonardo Blair of the Christian Post reported that militants have been displaying the severed heads of children from Christian families on sticks in one of Mosul’s parks.”

According to one source quoted in the article above, “‘They are absolutely killing every Christian they see. This is a genocide in every sense of the word. They want everyone to convert and they want Sharia law to be the law of the land.’”

Francis also wrote a personal letter two days ago to the Secretary General of the United Nations, calling for action from the world community. It did not take long—just two days—for the pope to take the next step of calling for world military action against ISIL.

Great prophecies are now diving on the world at the speed of guided missiles on their way to hit a target. In the midst of this dying world, only one Work on Earth is bringing any real good news—and this is the greatest good news of all-time—the soon-coming KINGDOM OF GOD. This world’s now estimated 7.2 billion people live with no hope for the future. Yet diligent Bible students can know the truth of what lies ahead. To learn more about God’s soon-coming kingdom, read our booklet What Is the Kingdom of God?