This website requires the use of Javascript to function correctly. Performance and usage will suffer if it remains disabled.
How to Enable Javascript
How Should You Prepare for Difficult Times?

How Should You Prepare for Difficult Times?

The “prepper” movement is growing across America, and includes many professing Christians. What does the Bible say about the survivalist mentality? 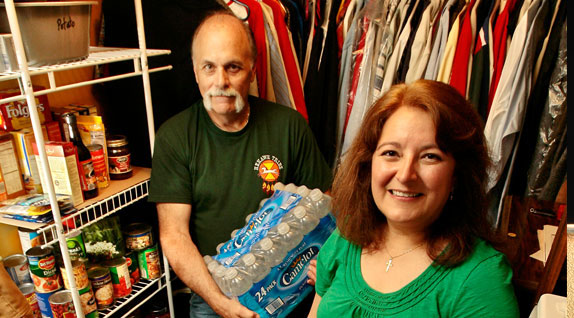 A middle-aged entrepreneur from the American Midwest speaks with obvious satisfaction about the condominium he plans to move his family into within the next few years. Married with four children, he considers himself a family man and a dedicated member of a non-denominational Christian church.

While he does not yet have a firm move-in date, and he has not yet seen it in person, he enthusiastically describes the 1800-square-foot dwelling’s comfortable furnishings and amenities. It is in a multi-unit complex, to be filled with investors from across the country, and perhaps beyond—when the time comes.

Also, his condo will be underground—80 feet below the surface, housed in what was once an Army missile silo.

This is a composite picture of those who call themselves “preppers”—men and women who believe civilization may soon come apart at the seams, and who are focused on “prep” (preparation) to survive the aftermath.

Reuters reports that within this growing American subculture, “Some are driven by a fear of imminent societal collapse, others are worried about terrorism, and many have a vague concern that an escalating series of natural disasters is leading to some type of environmental cataclysm.”

The preppers are not alone in their concern. News headlines from around the world are so unsettling that some people are simply tuning out all news—burying their heads in the proverbial sand.

But others think, What is going on? Why so much instability, upheaval, upset and bad news all at once? With this environment as a backdrop, one recent survey showed that more than six in 10 Americans believe that a “major catastrophic event” will soon strike the nation (USA Today).

One of the leading figures of the prepper movement is James Wesley Rawles, who maintains a popular survivalist blog. In his book How to Survive the End of the World as We Know It: Tactics, Techniques and Technologies for Uncertain Times, he summarizes the thinking that drives preppers: “In the First World, less than 2 percent of the population is engaged in agriculture or fishing…The food on our tables often comes from hundreds if not thousands of miles away. Our heating and lighting are typically provided by power sources hundreds of miles away. For many people, even their tap water travels that far…The average American comes home from work each day to find that his refrigerator is well-stocked with food, his lights come on reliably…his toilet flushes, his paycheck has been automatically deposited to his bank, his garbage has been collected, his house is a comfortable seventy degrees…We’ve built a very Big Machine that up until now has worked remarkably well, with just a few glitches. But that may not always be the case. As Napoleon found out the hard way, long chains of supply and communication are fragile and vulnerable.”

Recognizing the fragility of modern commerce and society, many are motivated by fear to look for a way out of what they see as an inevitable breakdown.

Are Survival Shelters the Answer?

The prepper phenomenon sustains a cottage industry of blogs, books and supply companies. A new cable reality show even follows individuals within the movement. The program’s first episode gave the channel its largest Tuesday-night audience ever.

The survivalist movement has also fueled expansion in another industry: underground shelters.

Americans who lived through the Cold War era may remember “fallout shelters” found throughout the suburbs—rudimentary structures stocked with food and water and perhaps a few board games, usually built in basements or underground in backyards, designed to withstand the gamma rays that would contaminate the landscape after a nuclear blast. Families were prepared to spend weeks in them after an expected Soviet attack to avoid radioactive exposure.

These shelters’ modern counterparts are a far cry from those spare quarters. Some resemble underground luxury apartment buildings, featuring comforts such as gyms, spas and movie theaters. One company that sells space in such shelters claims that they are built to withstand virtually anything, “from a pole shift [this refers to the idea that Earth’s poles, and by extension its rotation, are shifting—a theory largely rejected by scientists], to super volcano eruptions, solar flares, earthquakes, tsunamis, pandemics, asteroids, the anticipated [effects] of Planet X/Nibiru [a supposed additional planet in our solar system/a huge asteroid said to be on a collision course with Earth], and manmade threats including nuclear explosions, a reactor melt down, biological or chemical disasters, terrorism and widespread anarchy” (terravivos.com).

Setting aside questionable astronomy for a moment, this sales pitch sounds reasonable and reassuring. The shelters seem to provide impenetrable protection.

But there is more to consider. What happens when scores of strangers are thrown together under extreme circumstances? How will they coexist? Who will lead? Will there be voting? Or will it turn into a “might makes right” situation? Have the shelters’ marketers taken into account what human nature can give rise to when stuck in claustrophobic quarters for months, or even years?

What if the danger above ground outlasts the bunker’s supplies? Or what if the disasters that occur are far worse than anything seen before?

Many professing Christians signing up to live in these communal shelters assume that “Armageddon,” a term often misapplied to the events that precede the Return of Christ, will involve occurrences similar to those of the past.

But Scripture makes clear that unprecedented cataclysms are ahead. Read in your own Bible what is foretold to occur during that time: “And the heaven departed as a scroll when it is rolled together; and every mountain and island were moved out of their places” (Rev. 6:14). This is far beyond any typical localized earthquake—and beyond anything that a manmade bunker is built to withstand.

The rest of the passage records in advance the response from those who will have survived to that time, from wealthy heads of state to slaves: “And the kings of the earth, and the great men, and the rich men, and the chief captains, and the mighty men, and every bondman, and every free man, hid themselves in the dens and in the rocks of the mountains; and said to the mountains and rocks, Fall on us, and hide us from the face of Him that sits on the throne, and from the wrath of the Lamb: for the great day of His wrath is come; and who shall be able to stand?” (vs. 15-17).

Human beings have real physical needs, without which they cannot function or live for very long. These necessities have been abundant in the West, with many government agencies, safety net programs, and charities working to ensure their availability. But in a country that is nearly insolvent, as the owner of a survival supply store stated, “A lot more people have come to maybe not trust that the institutions that were there for us in the past to help protect us would be there in the future…These people, like I am, are interested in becoming more self-reliant and less dependent” (WPTV).

Christians among the prepper movement should consider what Jesus Christ said about these necessities. Did He exhort His followers to practice self-reliance, and to stockpile goods?

“Behold the fowls of the air: for they sow not, neither do they reap, nor gather into barns; yet your heavenly Father feeds them. Are you not much better than they?

“Which of you by taking thought can add one cubit unto his stature? And why take you thought for raiment? Consider the lilies of the field, how they grow; they toil not, neither do they spin: and yet I say unto you, That even Solomon in all his glory was not arrayed like one of these.”

Christ’s instructions do not prohibit foresight and planning. For example, having an emergency kit available in case of a power outage or severe weather is wise. The point is that His followers should not take anxious thought about physical things, since God provides these—to those who obey Him in all points. (See Psalm 37:25.)

Naturally, if and when most people see danger coming, they do their best to avoid it. This is described in the Bible as a “prudent” reaction: “A prudent man foresees the evil, and hides himself: but the simple pass on, and are punished” (Prov. 22:3; 27:12).

Yet have you considered that the same God who inspired that verse states that sometimes evil—better translated “trouble”—is sent directly by Him? “I form the light, and create darkness: I make peace, and create evil: I the Lord do all these things” (Isa. 45:7).

The Bible makes clear that an unparalleled time of trouble, known as the Great Tribulation, lies ahead for all mankind: “For then shall be great tribulation, such as was not since the beginning of the world to this time, no, nor ever shall be” (Matt. 24:21). This period will last for years, and will catch the whole world off-guard: “For as a snare shall it come on all them that dwell on the face of the whole earth” (Luke 21:35).

God promises that those who are wholeheartedly faithful to Him will be protected. Notice: “Because you have kept the word of My patience, I also will keep you from the hour of temptation [trial], which shall come upon all the world, to try them that dwell upon the earth” (Rev. 3:10).

There is a real way of escape from what is coming—and it does not involve living in a missile silo, or any other human solution. God makes clear that He is the source of real protection.

King David, whose words are recorded in the Old Testament, understood this:

The state of the world is bleak, and it will ultimately become even more grave, before the greatest good news of all time becomes reality.

If you want to be “kept” from the coming hour of trial, your focus should not be on physical survivalism. It is ultimately futile! Rather, get on the path to real security by turning to and fully serving God—the only One who can provide protection from global calamity.

To learn more about what is coming—and what can be your future—read David C. Pack’s America and Britain in Prophecy.