This website requires the use of Javascript to function correctly. Performance and usage will suffer if it remains disabled.
How to Enable Javascript
St. Patrick’s Day: Religious Tribute or Empty Tradition?

Superstitions, hard drinking, and raucous behavior are hints of this holiday’s true colors. 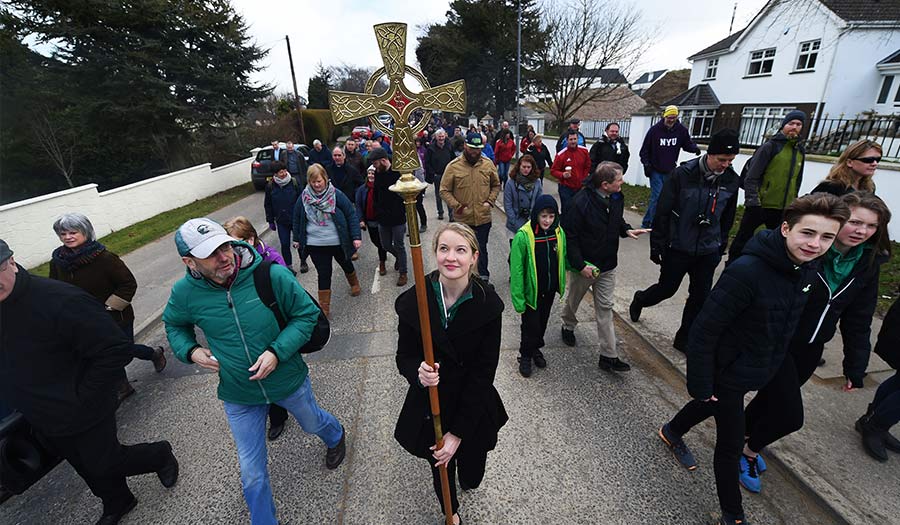 The holiday has become an emblem of spring and all things Irish. A day for millions to wear their “St. Patty’s” attire and pinch those who neglect to wear green. City streets reverberate to the tunes of marching bands. Harp, fiddle and bagpipe sounds are matched with the aroma of freshly boiled corned beef (or traditional boiled bacon) and cabbage.

For countless numbers of celebrants, it is a holiday in which religion and the pub meet halfway. Many begin the day with acts of devotion, only to end it with excessive booze. This type of widespread inebriation moved Michigan’s government to pass a “super drunk” law in 2010. The date is even part of AAA motor club’s “tow-to-go” program, a free and confidential ride home for drunken holiday drivers.

The historical inspiration for such a celebration? A fifth-century Briton largely attributed with Ireland’s conversion to Christianity. On the anniversary of his death, March 17, he is commemorated as the symbol of Ireland.

In The Antiquities of Ireland, author Edward Ledwich examined medieval accounts that promoted the myths surrounding the holiday: “St. Patrick while an infant, brought a new river from the earth, which cured the blind. He produced fire from ice. He raised his nurse from the dead. He expelled a devil from an heifer, and he changed water into honey. These were but the infant sports of this wonder-working Saint.”

Obvious fables aside, most see nothing wrong with the festivities, national pride, and religious overtones attached to this day. Yet the holiday’s track record unmistakably shows its true intent.

St. Patrick’s Day has resulted in numerous riots over the years.

Notice what occurred at Ohio’s University of Dayton in 2013, which was named the top St. Patrick’s Day party school in the nation during the same year.

“More than 1,000 people were involved in [a] St. Patrick’s Day riot,” Dayton Daily News reported. “Ten police jurisdictions respond to the incident in the student campus housing area. There were broken beer bottles and 11 damaged cars, including a police cruiser.”

The year 2011 was particularly violent.

An out-of-control Hoboken, New Jersey, celebration resulted in 34 arrests and reports of two sexual assaults, Reuters stated. As a result, the town’s mayor declared “she would switch the traditional weekend parade to a weekday.”

The article continued: “Scores of arrests and violence at parades in Albany, New York and Newport, Rhode Island are prompting police and city officials to rethink their approach as well. They said [2011’s] parade violence is the worst they have seen to date.”

In Cleveland, “Fights broke out in Public Square around 3 p.m. and continued for over three hours…The majority of those arrested were teenagers,” NewsNet5 reported.

At Pennsylvania State University, a student-run St. Patrick’s Day drinking marathon referred to as a “drunken free-for-all” has become more extreme. According to The Patriot-News, “In recent years, the event has led to a rash of vandalism, public drunkenness, medical emergencies and arrests. Community and student groups have attempted to tamp down the fallout of hundreds of drunken young people carousing through campus and borough streets. Even so, with some of those initiatives in place, last year was the worst year yet.”

In Ireland, “Fifteen teenagers under the legal drinking age were arrested in just one area of south Dublin in a night of drunken St Patrick’s Day celebrations,” British newspaper The Independent reported. “The figures reflect a worrying rise in under-age drinking flagged by leading mental health experts…”

These are far from uplifting ways to honor a “saint.”

In fact, St. Patrick’s Day is brimming with what the Bible condemns. Notice: “Now the works of the flesh are plain: fornication, impurity, licentiousness, idolatry, sorcery…selfishness, dissension, party spirit, envy, drunkenness, carousing, and the like…” (Gal. 5:19-21, Revised Standard Version).

Patrick is known as Ireland’s “Patron Saint.” In his book, Ledwich explained how the “patronage” came about: “Let us next inquire how St. Patrick came to be dubbed the Patron Saint of Ireland. The ninth century, famous for reviving and incorporating Pagan practices with the Christian ritual, observing that Rome had her… Mars, Athens her Minerva, Carthage her Juno, and every country and city a proper and peculiar deity, whose guardian care was its greatest protection and security, conceived it a very becoming employment for Christian Saints to assume the patronage of a Christian People, and to interest them the more in this new occupation, they brought their bones or reliques, wherever laid, and deposited them in the principal church of the metropolis. The superstition and illiteracy of the age were favourable to every clerical imposition” (The Antiquities of Ireland).

The author further stated: “It is an undoubted fact, that St. Patrick is not mentioned by any author or in any work of veracity in the 5th, 6th, 7th, or 8th centuries. In 858, we find his name and miracles in a fragment of Nennius: this fragment is composed of the wildest incoherences and exactly in the style of the incredible fictions of that age. It seems to have been compiled from an Irish Legend, as in some places it refers to it.”

Not one of Patrick’s generally accepted writings claim any connection with the Roman church of his time. William Dool Killen’s The Ecclesiastical History of Ireland records: “He [Patrick] never mentions either Rome or the Pope, or hints that he was in any way connected with the ecclesiastical capital of Italy. He recognises no other authority but that of the Word of God…”

The title “Patron Saint” refers to “a saint or angel designated (by individuals, groups, or the Church) as the heavenly protector of individuals, institutions, or specialized activities,” according to the New Catholic Encyclopedia. This implies Patrick is somewhere in heaven looking over and protecting Ireland.

Such an idea also conflicts with the Bible, a book, Killen explained, Patrick embraced as his only authority.

God’s Word reveals that a person should rely on Him for protection—not any person—dead or alive.

Ecclesiastes states, “…the dead know not anything, neither have they any more a reward; for the memory of them is forgotten” (9:5).

This means only one thing: the real Patrick has been dead for a long time, and knows “not anything.”

No matter how many millions today believe otherwise, the concept of a dead “Patron Saint” is contrary to what the Bible teaches. (For much more on this subject, read Do the Saved Go to Heaven?)

Above all, St. Patrick’s Day is about Irish superstitions and traditions. Here are some of the most popular:

Leprechauns: “In Irish folklore, [a] fairy in the form of a tiny old man often with a cocked hat and leather apron. Solitary by nature, he is said to live in remote places and to make shoes and brogues. The sound of his hammering betrays his presence. He possesses a hidden crock of gold; if captured and threatened with bodily violence, he might, if his captor keeps his eyes on him, reveal its hiding place. But usually the captor is tricked into glancing away, and the fairy vanishes” (Encyclopaedia Britannica).

God tells those who follow Him that such beliefs are worthless: “For the customs of the people are vain…” (Jer. 10:3). Strong’s Exhaustive Concordance defines “vain” as “unsatisfactory” or “emptiness.”

Shamrocks: “According to St. Patrick’s Day lore, Patrick used the three leaves of a shamrock to explain the holy trinity…Today, St. Patrick’s Day revelers wear a shamrock out of tradition,” National Geographic reported. Colossians 2:8 warns against following manmade traditions: “Beware lest any man spoil you through philosophy and vain deceit, after the tradition of men, after the rudiments of the world, and not after Christ.” (For more on this, read the book The Trinity – Is God Three-In-One?)

Excessive drinking: “Like many other forms of carnival, St Patrick’s Day is a feast day, a break from Lent in which adherents are allowed to temporarily abandon rigorous fasting by indulging in the forbidden. Since alcohol is often proscribed [forbidden] during Lent the copious consumption of alcohol is seen as an integral part of St Patrick’s Day” (Multiculturalism’s Double-Bind). (For a better understanding of this topic, read the article “The True Meaning of Lent.”) Scripture strictly forbids drunkenness: “And be not drunk with wine, wherein is excess; but be filled with the Spirit” (Eph. 5:18).

Wearing green and pinching: “According to some accounts, blue was the first color associated with St. Patrick’s Day, but that started to change in the 17th century,” The Christian Science Monitor stated. “Green is one of the colors in Ireland’s tri-color flag, and it has been used in the flags of several Irish revolutionary groups throughout history. Ireland is the ‘Emerald Isle,’ so named for its lush green landscape. Green is also the color of spring, the shamrock, and the Chicago River, which the Midwestern city has dyed green on St. Patrick’s Day for the past 40-odd years.”

The article later explains that pinching is “an entirely American tradition that probably started in the early 1700s. St. Patrick’s revelers thought wearing green made one invisible to leprechauns, fairy creatures who would pinch anyone they could see (anyone not wearing green). People began pinching those who didn’t wear green as a reminder that leprechauns would sneak up and pinch green-abstainers.”

But the apostle Peter taught true followers of God, “Let the time that is past suffice for doing what the [unbelievers] like to do, living in licentiousness, passions, drunkenness, revels, carousing, and lawless idolatry. They are surprised that you do not now join them in the same wild [licentiousness], and they abuse you” (I Pet. 4:3-4, RSV).

Also, I Timothy states, “Have nothing to do with godless and silly myths” (4:7, RSV).

Recognize that, as with many other manmade holidays, St. Patrick’s Day is filled with pagan customs. The shamrock, green paraphernalia, and a plethora of fantasies about Patrick, including his fictional function as “Patron Saint” in heaven, are simply empty traditions. Such manmade holidays were adopted as early church leaders began “laying aside the commandment of God” to “hold the tradition of men.”

But to what should they be holding?

God commands that seven Holy Days be kept throughout the year. He records in Leviticus 23 that these were to be observed forever (vs. 41). These were kept by Jesus Christ and the original apostles. Each feast depicts a fascinating step in His Master Plan of salvation. When these God-ordained Holy Days are obscured, so is God’s Plan for mankind.

To learn the vital importance of God’s biblical feast days, and how different they are from manmade traditions, read the free booklet God’s Holy Days or Pagan Holidays?