This website requires the use of Javascript to function correctly. Performance and usage will suffer if it remains disabled.
How to Enable Javascript
Black Friday’s Feeding Frenzy

What does the annual consumer blowout reveal about America? 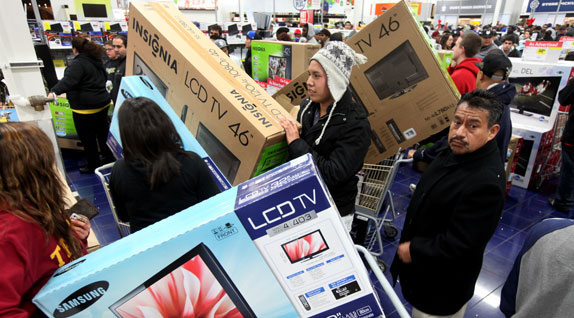 Ah, Thanksgiving weekend. A time for American families to fill their vehicles’ gas tanks, perhaps drive across state lines, get together with seldom-seen relatives, enjoy one of the most delicious meals of the year, give thanks for the nation’s bounty, catch up on recent happenings in each other’s lives, reminisce over old memories, watch football, and…engage in competitive shopping?

Yes, the day after Thanksgiving, labeled “Black Friday,” is like no other.

“The American holiday shopping season began in earnest Friday as stores opened their doors at midnight—a few hours earlier than they normally do on the most anticipated shopping day of the year. A few retailers even had lines of shoppers when they opened on the Thanksgiving harvest holiday on Thursday.

“Retailers hope the earlier openings will make Black Friday shopping more convenient for Americans who are more likely to be worried about high unemployment and the other challenges they face in the weak economy. Black Friday is important to merchants because it kicks off the holiday shopping season, a time when they can make 25 to 40 percent of their annual revenue. It’s expected that shoppers will spend nearly $500 billion during the holiday shopping season, or about 3 percent more than they did last year” (The Associated Press).

Stan Honda/AFP/Getty Images
Mayhem: A crowd lines up to get on an escalator inside Macy’s department store in New York after the midnight opening to begin the “Black Friday” shopping weekend (Nov. 25, 2011).

Expanded business hours created a buzz: “A record number of shoppers are expected to head out to stores across the country this weekend to take advantage of discounts of up to 70 percent. For three days starting on Black Friday, 152 million people are expected [to] shop, up about 10 percent from last year, according to the National Retail Federation,” Fox News reported.

So how was the turnout?

“About 600 shoppers were in line at a Target store in Brooklyn in New York when it opened at midnight. By the time it opened at midnight, nearly 2,000 shoppers wrapped around a Best Buy store in St. Petersburg…Mall of America, the nation’s largest…had 15,000 shoppers for its midnight opening. And more than 9,000 people were outside the flagship Macy’s store in New York’s Herald Square at its midnight opening, up from 7,000 a year ago” (ibid.).

For decades, turkey-and-pie-stuffed consumers have descended in droves on malls and shops the day after Thanksgiving, looking for deep discounts on Christmas gifts for others, or splurging for themselves.

But why “Black” Friday? While many now assume it refers to the day that retailers’ books cross from red ink to black (which signifies that a company is making a profit), this was not the original meaning.

“In 1966, Black Friday was the name the Philadelphia Police Department gave to the Friday after Thanksgiving,” ABC News reported. “The police hated the day—massive traffic jams, overcrowded sidewalks, lots of shoplifters—all because downtown Philly stores were filled with shoppers taking advantage of the first holiday sales.

“The goal was to make it a day that shoppers wanted to avoid. The negative name started to spread outside Philadelphia a few years later. In a 1975 Associated Press article, datelined Philadelphia, a sales manager at Gimbels [department store] was quoted as saying, ‘That’s why the bus drivers and cab drivers call today “Black Friday.”’”

“It was only later that retailers, and other people who rely on Black Friday to make money, attempted to redefine the term as something positive.”

Beyond the sheer number of people coming through their doors, store chains anxiously await the sales results of this day each year.

This year was no exception. Retailers held their breath: with the American economy still wobbly, would shoppers spend enough to make the year’s end rosy? Many stores’ unprecedented extended hours would certainly give them plenty of opportunity to do so.

When the receipts were tallied, a bright picture emerged. Shoppers coughed up an estimated $52.4 billion, 6.6 percent more than in 2010. The stock market rallied afterward, partly due to these figures.

Despite encouraging numbers, another phenomenon that is becoming a yearly tradition repeated itself in 2011: shoppers resorting to violence, often to get their hands on products in limited supply.

Consider a sampling of stories—solely from Wal-Mart stores, many of which were reported by USA Today.

“Troubles at the nation’s largest retailer began late Thanksgiving Day, when about 20 customers, including kids, suffered minor injuries at a Los Angeles Wal-Mart after they were pepper sprayed by a shopper. Police…say she used the pepper spray to gain an edge over fellow shoppers vying for discounted Xbox video game players.”

These alone should cause general concerns. Yet there are many others.

• One shopper was arrested at a Kinston, North Carolina, Wal-Mart after altercations took place between customers fighting over cellphones marked down more than 80 percent. A security guard used pepper spray on several store patrons.

• A robbery at gunpoint occurred in a South Carolina Wal-Mart parking lot.

• Two women sustained injuries during a fight over electronics in a Rome, New York, Wal-Mart.

• “…a teenage girl was trampled at a western Michigan Wal-Mart store and suffered minor injuries after getting caught in a rush to a sale in the electronics department…[she] was knocked down and stepped on several times in the store near Muskegon” (Detroit Free Press).

• “In Florence, Ala., a shopper was subdued with a stun gun at a Wal-Mart store as shoppers gathered for Black Friday sales. Authorities said he is charged with public intoxication, disorderly conduct and resisting arrest” (ibid.).

• “Police used a stun gun to subdue [a] Wal-Mart shopper…in Milford, Conn., after he allegedly hit another shopper in a Thursday night fight while waiting to buy video games.”

• “A man was arrested in a scuffle at a jewelry counter at a Kissimmee, Fla., Wal-Mart.”

“The incidents appear to be the result of two converging trends on Black Friday: bigger crowds in search of bigger, broader deals,” USA Today reported.

Fights over consumer goods first entered public consciousness in the 1980s, at the height of the craze over Cabbage Patch Dolls. At that time, a rash of scuffles between mothers intent on snapping up one of a few remaining dolls elicited disbelief and amusement. The trend, however, was short-lived.

But in recent years, the list of Black Friday-related arrests and injuries seems to grow annually, with the worst case being the trampling death of a store employee in 2008. What has changed?

A fundamental development in American life over the past few decades has been how expectant the average man and woman have become in the area of physical comforts.

Consider. According to the National Association of Home Builders, the average U.S. home in 2009 was 2,700 square feet, roughly double the figure of 1970.

How about the accoutrements inside those homes?

A look into a typical garage reveals that the average number of vehicles per household rose 66 percent from 1969 to 2009, according to the U.S. Department of Energy.

Just a few decades ago, only the affluent toted outsized mobile phones. Today, the number of cellphones in the U.S. is almost the same as the number of people in the nation—and the United States is behind many other countries.

We have become a nation so awash in material goods that we can scarcely imagine life any other way. And for developed countries, this consumer mindset starts young. An Australian study of three- and four-year-olds revealed that “while the children were not yet able to read, they often knew exactly which logo corresponded with which brand. Certain logos—including those for fast food chains (McDonald’s), entertainment companies (Disney…and Warner Brothers) and cars (Toyota)—proved especially recognizable” (ABC News).

For context, recognize that this year’s consumer blitz occurred in the middle of a stagnating economy. It also flew in the face of the headline-grabbing protests about the plight of the “99 percent,” many of whom still enjoy imported wine and chocolate, smartphones and home theaters.

Now realize that many of these purchases are made with credit cards, which creates even greater financial strain on consumers who acquire cards with low interest rates only to find these soon skyrocket to 27 percent or more.

Going one step further, this shopping swarm is happening within a nation whose federal government is $15 trillion in debt to China, Japan, the United Kingdom, OPEC nations, Brazil, and Russia, as well as commercial banks, mutual funds, pension programs, and the Federal Reserve.

In the United States, Canada, the United Kingdom and other prosperous Western nations, most citizens do not entertain the thought that the lifestyle to which they have grown accustomed could quickly and radically change.

Persistent unemployment, diminishing job prospects, and other gathering dark clouds have many Americans worried. But compared to most of the globe, these are still good times. Social Security, Medicare and Medicaid funds have not run out, lights stay on, roads are still drivable. Food stamps are still printed and accepted, free government-subsidized cellphones are still available. Mortgage lending has tightened somewhat, but credit cards are still easy to receive. Buy-one-get-one sales, rebates and no-interest store financing are taken for granted.

Yet even a casual student of history knows that current conditions are unsustainable!

In light of this, questions arise: If each year shoppers increasingly resort to violence over non-essentials like towels or video game units, what happens when necessities become scarce? When grocery store shelves become bare, hospitals shut down, social services and safety nets fall apart, how will the average shopper act?

Too Much for Too Long

In a letter to American statesman Adlai Stevenson, author John Steinbeck wrote, “If I wanted to destroy a nation, I would give it too much and I would have it on its knees, miserable, greedy and sick” (Travels with Charley: In Search of America).

The United States has lived beyond its means for a long time. Measured against the yardstick of what we can actually afford, we have had too much! We increasingly cannot say “no” to ourselves—whether it is, “No, I don’t need a third helping of turkey,” or “No, I cannot afford a 3-D television this year,” or, “No, I should not punch the person who just took the last pair of boots off the rack.”

Students of history also learn that people, and whole nations, that cannot discipline themselves eventually have discipline imposed upon them. Can America keep postponing this reality check in the years ahead? If not, who will bring it discipline?