This website requires the use of Javascript to function correctly. Performance and usage will suffer if it remains disabled.
How to Enable Javascript
Seeing Clearly – The Story of the Human Eye

The Story of the Human Eye

The human eye is one of the most complex systems in existence and its origin is among the least understood. Learn why evolutionary theories become blurry where the eye is concerned. 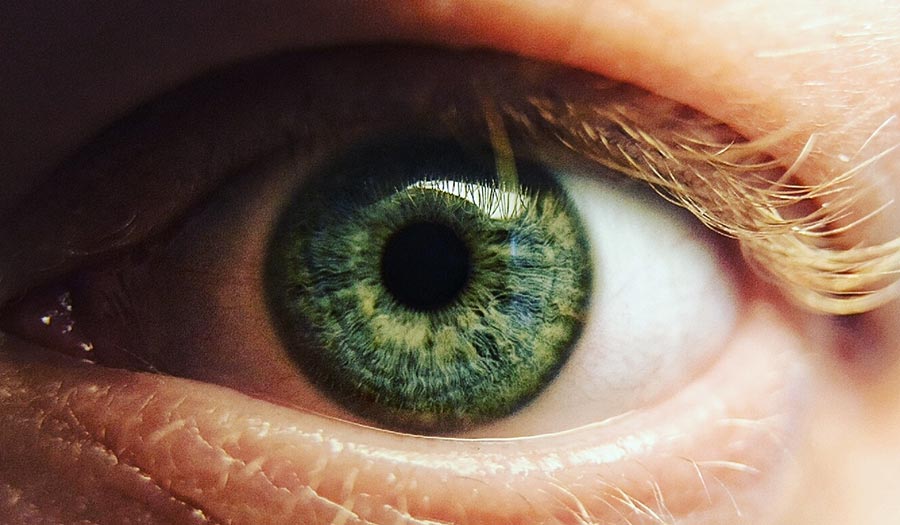 What allows you to read the articles in this magazine? Obviously, at a more complex level, you have to understand the English language. But before you even begin to decipher what is written, you must see it. In fact, an amazingly complex series of actions takes place between your eyes and your brain for you to see what is written on this page.

Your eyes are responsible for 80 percent of the information your brain receives. This makes it by far the most vital of your sensory inputs!

From how the inner eye functions, to how light becomes a picture in your mind, science has studied the human eye in such detail it is astounding. But while the function of the eye is crystal clear, its origin seems clouded in mystery.

What is really only the theory of evolution is assumed to be fact. Children are taught it in school and most scientists subscribe to its tenets. Yet surely evolution at least attempts to open the window into the origin of the eye. If so, there must be creatures from which our eyes evolved.

The story of this fascinating organ is both inspiring and, pardon the pun, eye-opening!

Before looking at the eye in the light of evolution, we must first understand how the eye functions and what systems are in place to allow photons to become an image. But you may wonder: what is a photon?

The whole universe is made up of tiny, microscopic (or even smaller) particles. The combination of these particles is what constitutes matter—the universe in which we live. One of these basic “particles” is a photon. Photons originate in the sun and are what we perceive as light. Without photons, there is no light! 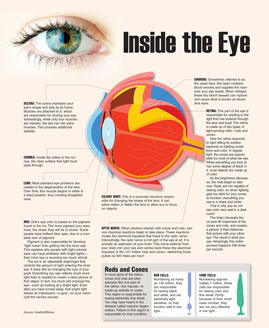 The way different objects reflect photons determines how colors, textures and surfaces are perceived. Everything we see is based on how substances absorb and reflect photons.

An easy example of this process is to look at two extremes: (1) a mirror and (2) a black surface. If you shine a light into a mirror, it will reflect light back to you.

On the other hand, if you shine a light at a black surface, very little will reflect back at you. How the surface reacts with light determines if you see color. While this is a very simplified explanation of how photons react to produce differences in what we see, it helps explain how the eye plays a part in this procedure.

When light reflects off an object, it changes the makeup of that light, which then enters your eye. Imagine photons as the tiny ammunition in pellet guns; this will help you visualize their path through your eye and into your brain.

We have not yet addressed how the brain interacts with the eye, or any of the corrective measures the eye undertakes when it detects a problem. But before going into that, the following is a detailed representation of what really happens when a “pellet” comes in contact with the surface of the retina.

“When light first strikes the retina, a photon interacts with a molecule called 11-cis-retinal, which rearranges within picoseconds to trans-retinal. The change in the shape of [11-cis-] retinal forces a change in the shape of the protein, rhodopsin, to which the retinal is tightly bound. The protein’s metamorphosis alters its behavior, making it stick to another protein called transducin. Before bumping into activated rhodopsin, transducin had tightly bound a small molecule called GDP. But when transducin interacts with activated rhodopsin, the GDP falls off and a molecule called GTP binds to transducin. (GTP is closely related to, but critically different from, GDP.)

“Another membrane protein that binds cGMP is called an ion channel. It acts as a gateway that regulates the number of sodium ions in the cell. Normally the ion channel allows sodium ions to flow into the cell, while a separate protein actively pumps them out again. The dual action of the ion channel and pump keeps the level of sodium ions in the cell within a narrow range. When the amount of cGMP is reduced because of cleavage by the phosphodiesterase, the ion channel closes, causing the cellular concentration of positively charged sodium ions to be reduced. This causes an imbalance of charge across the cell membrane which, finally, causes a current to be transmitted down the optic nerve to the brain. The result, when interpreted by the brain, is vision” (“Evidence for Intelligent Design from Biochemistry”).

It is not necessary to fully understand what takes place to cause those electrical impulses to fire into your brain, but it is necessary to identify the extreme complexity required for the process to take place. Are you beginning to understand why the concept of evolution becomes impossible when applied to your eyes?

The makeup of an eye—lens, iris, retina, etc.—are the nuts and bolts that send the electrical pulse into your brain. But how does a brain know what to do with those signals when they are received?

Imagine a computer, with all its parts and pieces, many of which are too complicated for most people to understand. No matter how intricate and complicated the equipment is, without software, it can do nothing. Your computer will not even turn on without some form of software telling the hardware—the actual physical pieces of the computer—what to do.

It is the same with the eye. All the movements that take place in the eye are controlled by your brain. The brain moves your eye to center on something, adjusts the lens to focus, and opens or closes the iris to allow the right amount of focused light on the retina.

Now that you understand the basics of how an eye operates, try this simple experiment to witness how much interaction actually takes place between the brain and eye. While you are reading these words, look at something far away. While you do this, visualize that you had to move the muscles in your eye, change the iris, and adjust your lens to get the object in focus.

This leads to the final part in understanding how eyes work. How does the brain “know” how to transform the more than 100 million impulses into what we see? If your brain did not know how to put together the photon “pellets” and then balance what each eye sees, there would be no comprehensible picture defined as vision. 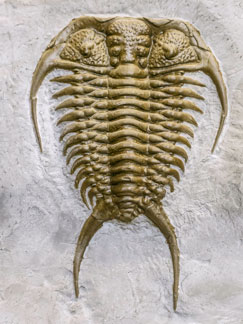 The crux of the theory of evolution is that all living animals have evolved from simpler creatures. They all started from a small puddle of living matter, which evolved into more complex and diverse creatures, and then animals.

This whole concept is based on the assumption that, over time, all organisms improve by natural selection—survival of the fittest. While that concept is riddled with holes, let’s assume it is true for a moment.

Anything complex that appears too quickly, or appears without any prior organism being its precursor, would be an embarrassment to proponents of evolution.

This introduces the trilobite. These extinct invertebrates existed in vast numbers throughout the world’s oceans, and date back to the Cambrian period—approximately 400-500 million years ago. What is most amazing about these creatures is that they had remarkably complex vision systems.

So complex were their eyes that no invertebrates—or even many vertebrates—possess anything comparable today! Also, these creatures seem to have appeared suddenly, with no fossil record of anything of the like before them.

Professor Richard Fortey, a researcher at the Natural History Museum in London, stated in Natural History: “We know that the first trilobites already had a well-developed visual system. Indeed, the large eyes found in the genus Fallotaspis, from Morocco, prove that sophisticated vision goes back at least 540 million years to the Cambrian period.”

Of the Phacops trilobite genus, he stated, “Clearly a very sophisticated structure (even more so than the [usual] hexagonal-lensed trilobite eye), Phacops’s crystal eye is a sports coupe in the age of the boneshaker.”

With such statements from a world-renowned paleobiologist, it is quite obvious that another leg “supporting” the theory of evolution is nothing more than smoke and mirrors. Without a complex brain appearing at the same time as the eyes, they would be completely useless!

Another amazing process takes place in regard to this. In any single lens system (such as our eyes), the image received is inverted. So, not only does your brain put together those millions of photons, it also knows to invert the image!

As with computer software, the brain has to be programmed with all the information needed to interpret this data. It has to know what colors are represented by what type of light, and how the whole picture fits together.

If you really think about it, what you see with your eyes is nothing more than a picture that your mind has created. Put another way, it is the vivid version of what you can visualize with your eyes closed.

The human brain truly is the most amazing organ ever created!

Again, while it sounds impossible for the eye to have evolved, what are the odds of both the software and hardware appearing at the same time?

It is simply impossible!

Think for a moment on the complexity required to form the first eye. Or what caused a cell to become sensitive to light. Or why trilobites and their eyes disappeared. (See the inset “Trilobite’s Eye: Evolution Reversed?”)

Such questions are never addressed!

Even more amazing, there has never been any attempt to explain the process by which an eye could have possibly evolved from a simpler form.

But is it really that amazing? When you cannot explain the process by evolution, there is only one other option—it was designed! And that is an option most scientists refuse to entertain.

In light of the complexity displayed in the human eye—just one organ of one living creature—you can see why God states, “The fool has said in his heart, There is no God” (Psa. 14:1).

God understands that physical people need physical proof. For those willing to look, there is evidence: “For the invisible things of Him from the creation of the world are clearly seen, being understood by the things that are made, even His eternal power and Godhead; so that they are without excuse” (Rom. 1:20).

These proofs also point to the real origin behind the eye—and the whole universe—the God of the Bible! For more fascinating details proving the existence of a divine Creator, watch our five-part The World to Come broadcast series titled “Does God Exist?—Many Absolute Proofs!” 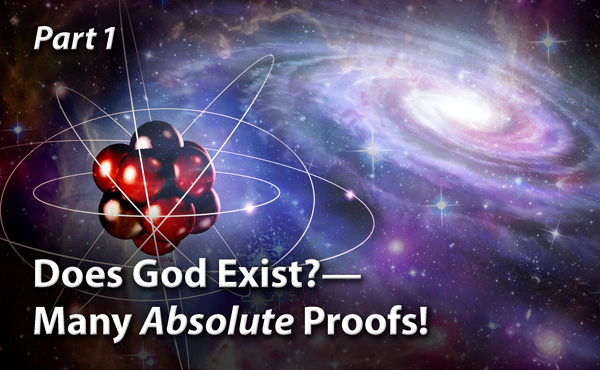