This website requires the use of Javascript to function correctly. Performance and usage will suffer if it remains disabled.
How to Enable Javascript
Liberals vs. Conservatives – Will the United States Be Ripped Apart?

Will the United States Be Ripped Apart?

Cutthroat politics have left the United States in political stalemate. 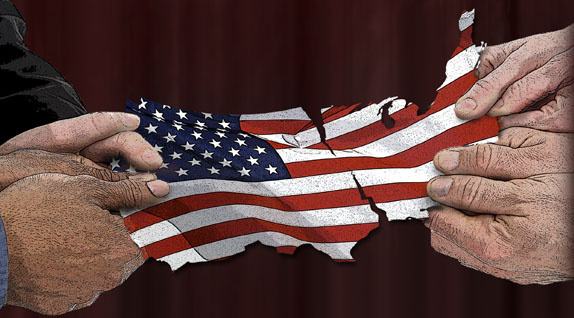 Their goals seem similar: peace, prosperity, health and a fair chance at success for everyone. All admirable ideals. The trouble comes when liberals and conservatives discuss how to accomplish them.

In other protests, radical conservatives held up signs comparing the current president to Adolf Hitler—during leftist rallies, fringe liberals called for riots in the streets to move forward their agenda.

Saddled with crippling unemployment, home foreclosures, years of overspending, and the makings of a Great Depression Part II, American citizens have called on politicians to do one thing. Just one: work together to stabilize the economy and bring normalcy back to their lives.

But there is a problem. For decades, the rift between the political left and the right has grown from the size of a sidewalk crack to opposite ledges of the Grand Canyon—with miles of desolate, rocky terrain between the two. In effect, each side refuses to climb down and meet on the banks of the Colorado River.

Chip Somodevilla/Getty Images
Opposite sides: Anti-abortion and pro-choice demonstrators argue in front of the Supreme Court during a March for Life in Washington, D.C. (Jan. 24, 2011).

The constant backbiting, shameless politicking, and venomous rhetoric leave America in gridlock. Liberal ideals have a death grip on one piece of the U.S., yanking it toward the left end of the political spectrum. Conservative ideals are clamped onto another part of the nation, pulling with every ounce of strength toward the right.

In the middle is America, and something must give. Either the nation discovers the way to true unity, or it will dismantle itself from within—en route to an utter crash in standard of living and world status.

Lines in the Sand

Consequences of the right-left rift hit home for Minnesota in early July 2011. There, a Democratic governor and “Republican legislative leaders failed to reach agreement on a $5 billion budget deficit…state offices, parks, highway rest areas and a state zoo were shuttered. In addition, 22,000 government workers were hit with layoff notices.

“When negotiations broke down, the two sides were about $1.4 billion apart with Democrats insisting on a tax increase for the rich and Republicans strongly opposed” (Reuters).

While the opposing parties were able to make some concessions, they were still “$1.4 billion apart”! As the days ticked by without a budget deal, each side blamed the other for the shutdown.

Finances aside, there is little that liberals and conservatives agree upon. On almost every issue, it is a war of words: “Pro-life” vs. “Women’s Rights”—“Small Government” vs. “Big Government”—“Sanctity of Marriage” vs. “Gay Rights.”

Sometimes, the arguments border on the absurd, where someone takes an opposing viewpoint solely because it is the opposite of their opponent.

The United States has become accustomed to the constant back and forth of partisan politics. Many voters probably cannot remember a time when the two parties were not working to undermine one another.

The divide began long ago.

Both political ideologies came into their own around the time of the American Revolution, with their main goals to remove tyrant rulers. Historically, conservatives stick to long-held traditions and distrust sudden change to society. This viewpoint tends to steer clear of what are seen as abstract, “high-minded” ideas, and favors limited government. Liberals also originally believed in small government, while emphasizing the rights of the individual. Liberalism is more receptive to societal change due to technological advances and shifts in morals.

Simplified, conservatives continue with what has worked in the past, slowly offering new changes. Liberals tap into intellectual arguments and theories to bring about swifter change and “justice for all.”

Many of America’s Founding Fathers borrowed from both camps. On some issues, they leaned conservative. On others, they shifted liberal. Much of early United States history was formed along this line of thinking.

The rift between these viewpoints suddenly widened in the early 20th century. Many liberals felt limited government intervention allowed the wealthy to grow too rich, perpetuating a societal imbalance and exploiting the poor.

To correct this, a new form of liberalism was born: the social liberal. This meant government intervention was necessary to take from the rich (usually through higher taxes) and redistribute the funds to the poor. This thinking was behind President Franklin D. Roosevelt’s New Deal and President Lyndon Johnson’s Great Society program, which gave rise to Medicare and Medicaid.

With each passing year, ideals of both conservatives and liberals evolve into increasingly varied and complex forms. Rather than reaching a consensus, individual ideas continuously result in the birth of disagreeing factions. Now there are neo-conservatives, classical liberals, libertarians, green liberals, traditionalist conservatives, and so on.

Ask yourself: Shouldn’t we be narrowing in on one form of government, rather than creating new ones all the time? Shouldn’t things be getting better rather than worse?

Any political idea starts with one assumption: man can govern himself. It began with warlords and monarchies. Rome first tried a republic. In Greece, Plato believed elite “philosopher kings” should rule. The United States began a push toward constitutional republics. World War II-era Germany and Italy experimented with fascism. The Soviet Union tried communism.

Every ancient empire ended in utter collapse. And the greatest nations of the 20th century are in decline (the British Empire, America, etc.), making way for new superpowers (China, India, etc.).

You must question the basic assumption of manmade governments: Can mankind really govern itself? With thousands of years of experimentation, making mistakes, adjusting political ideas—how can there still be political standoffs over how to achieve “life, liberty and the pursuit of happiness”?

Many conservatives will jump to point out that the U.S. was founded on Judeo-Christian values and sound biblical principles. In response, liberals will often dismiss the Bible as antiquated Hebrew literature.

On the surface, America appears to retain biblical roots—found on U.S. currency (“In God We Trust”), the Pledge of Allegiance (“under God”), and sprinkled throughout laws (for example, bankruptcy regulations borrow for the seventh year of release found in Deuteronomy 15). It also seems to be evidenced in the countless churches throughout the nation.

Yet one basic Bible verse reveals a vital, but largely ignored, point. Notice Jeremiah 10:23: “O Lord, I know that the way of man is not in himself: it is not in man that walks to direct his steps.”

If a Bible reader is honest, he will see that he cannot “direct his steps.” On the other hand, a person who relies on logic alone needs to look to the overwhelming evidence of history. Either way: man cannot govern himself!

The United States has a deeper connection to the Bible than its citizens realize. Notice Amos 9:9: “For, lo, I [God] will command, and I will sift the house of Israel among all nations, like as corn is sifted in a sieve, yet shall not the least grain fall upon the earth.”

Ancient Israel had 12 tribes. The modern-day nation called Israel is mostly comprised of the tribe of Judah. The other Israelitish tribes were lost to history. In Amos 9, God promised protection for these tribes as they “sifted,” or moved, through the nations. While that was happening, these peoples forgot their heritage.

A special blessing was put upon the tribe of Joseph, passed to his sons Ephraim and Manasseh. God promised that both would “grow into a multitude in the midst of the earth” (Gen. 48:16). The older brother, Manasseh, was to “become a people, and he also shall be great: but truly his younger brother [Ephraim] shall be greater than he, and his seed shall become a multitude of nations” (vs. 19). Only one pair of brother nations has ever become a singular great nation and a multitude of nations—the United States (Manasseh) and Britain and its former colonies (Ephraim).

While God promised blessings for these nations, it was not without qualifiers. Once those blessings were poured out in full, God had fulfilled His obligations to America and Britain.

Centuries of prosperity and decades of being a lone superpower have blinded American politicians—both liberals and conservatives. They have believed their government policies made America great. Not so! God’s blessings set the nation apart.

Still, both liberals and conservatives yearn for peace, prosperity, health and a fair chance at success for everyone. They want a burgeoning economy, to make sure the elderly are provided care, and that those troubled with debt can find relief.

Unknown to almost all, this kind of government was offered to ancient Israel and has been within reach of America for hundreds of years—if only its people had chosen it. The offer is found in Deuteronomy 30:15-16, where God says, “See, I have set before you this day life and good, and death and evil; in that I command you this day to love the Lord your God, to walk in His ways, and to keep His commandments and His statutes and His judgments, that you may live and multiply: and the Lord your God shall bless you in the land whither you go to possess it.”

This promise still stands today. God commands America to walk in His ways and keep His Commandments—His laws. Wherever there are laws, there is a government. And God’s government would bring “life” and “good”!

Notice that under God’s rule there would be…

Remember, man cannot “direct his steps.” History proves this. And America cannot eke out its own blessings through cutthroat politics. Only God’s governmental system can deliver all that liberals and conservatives desire for America.

Just as God set a fateful choice before ancient Israel, He does the same for the United States: “I call heaven and earth to record this day against you, that I have set before you life and death, blessing and cursing: therefore choose life, that both you and your seed may live” (Deut. 30:19).

Without God’s continued blessings, America is doomed to suffer decline and defeat at every turn. Unless liberals and conservatives—and every individual American—admit they have been wrong and take God’s warning to heart, they will have to endure the final outcome of political stalemate. (Read America and Britain in Prophecy to learn what the coming years will bring for these nations.)