This website requires the use of Javascript to function correctly. Performance and usage will suffer if it remains disabled.
How to Enable Javascript
North vs. South – What Can Unite a Fracturing Europe?

What Can Unite a Fracturing Europe?

The European Union is missing the key ingredient to truly unify the power bloc. 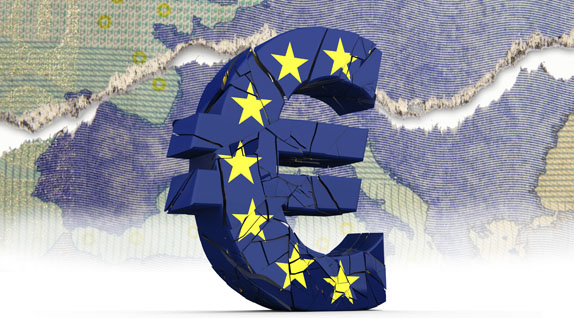 “I wish to speak to you today about the tragedy of Europe,” Winston Churchill said in a 1946 speech to European leaders.

At the time, the continent was in ruins. London had been ravaged by firebombing, Warsaw flattened, Berlin decimated. Despite being on the heels of a divisive war between European nations, Churchill longed “to re-create the European Family, or as much of it as we can, and provide it with a structure under which it can dwell in peace, in safety and in freedom.”

In remarks that kick-started the push toward a unified Europe, He continued, “We must build a kind of United States of Europe.”

Today, the motley “European Family” remains divided. And everything the power bloc does to foster unity seems to only further infighting, divisive rhetoric, and finger-pointing. There is squabbling over bailouts, multicultural woes, bloody protests, meetings excluding “poorly performing” nations, and even serious discussion about member-states exiting the euro zone.

What happened? A year and a half ago, the European Union seemed to be doing “fine, thank you.” It was finally gaining a voice on the world stage, moving as one organized unit, and even had a constitution of sorts—the Lisbon Treaty, which created a two-and-half-year-term presidency for the European Council.

EU Summit: Greek Prime Minister George Papandreou (center) addresses the press at the end of a conference in Brussels concerning a second bailout for Greece (June 24, 2011).

The future of the EU seemed solid, as described by European Commission President Jose Manuel Barroso in his article published by Project Syndicate: “The Lisbon Treaty allows us to achieve a greater coherence and gives us a much greater capacity to act. It will allow diplomacy, crisis management and an emerging European defense capability to be used hand in hand with more traditional policies such as trade and development.”

In 2010, the EU deftly handled the prospect of Greece defaulting on its federal debt, working with the International Monetary Fund (IMF) to create an impressive $1 trillion bailout fund for foundering economies.

By February 2011, the continent seemed confident it had dodged a bullet, with Poul Thomsen, head of the IMF mission in Greece, stating that the bailout had “successfully pulled the economy from an abyss.”

Under the first bailout, however, Greece was required to slash government spending and hike taxes to pay its debts. That plan seems to have backfired. Since that time, Greece’s recession has deepened, unemployment is over 14 percent, its economy is shrinking for the third year in a row, and citizens protest daily.

Today, Athens has approved fresh austerity measures, allowing the EU to dole out about $144 billion more. Europe appears to be fracturing under the weight of each successive bailout—first Greece, then Ireland and Portugal, now Greece again—and any positive outlook is out the window.

If the compounding crises continue, it appears EU member-states may revert to their default positions of “every nation for itself” and bring any progress within the power bloc to a grinding halt.

What can bind together a crumbling European Union?

Families often have disagreements, and the European Family is no different. Today that debate is over Greece. The question is this: how long should the EU prop up a failing member-state?

Newspaper headlines highlight the growing concern that Greece will go bankrupt whether or not the EU continues bailing it out. The New York Times wrote that the EU is “Fumbling Toward Default.” German paper Der Spiegel reported, “Legal Challenge to Greece Aid: ‘The Greeks Would Be Well Advised to Exit the Euro Zone.’” The Guardian simply stated, “Eurozone Split Over New Greece Bailout.”

Notably, the crisis has rejuvenated a divide between north and south. Taxpayers from the more fiscally stable “northern” nations, such as Germany and France, loathe the thought of shouldering the brunt of a mess they see as made by “southern” countries, such as Greece, Portugal and Spain. In contrast, the nations lining the Mediterranean cannot imagine a scenario in which sweeping budget cuts fail to cause nation-crippling protests and further stunt economic growth.

An Economist editorial summarized stereotypes of the north-south divide: “According to popular tradition…northerners are more likely to be thrifty, dour, cold, honest, hard-working, plain-speaking, blunt, rigid in their morality and a bit unfriendly to outsiders. Southerners are spendthrift, warmer, more fun-loving, lazier, less honest, more hospitable, more flexible in their morality and a bit sly.”

While these characteristics are overly simplified, they help to explain why Europe is split over this issue.

Similarly, the north-south divide can be simplified into a Germany-Greece divide. A Reuters report stated, “The euro was meant to bring Europe together. Instead, it’s splitting the currency bloc apart. Greeks are furious that its rescuers, led by Berlin, are imposing ever tougher conditions on the aid Athens receives. Germans are baffled that they should be burdened with the cost of rescuing what they see as a badly managed country.”

According to a Financial Times survey, “Germans overwhelmingly opposed offering financial support to Greece as it struggles to control its public sector deficit and are strikingly more hostile than other Europeans, including the British…Almost a third of Germans believed Greece should be asked to leave the eurozone.”

The poll also found that 40 percent of Germans believed their nation “would be better off outside the single currency—a significantly higher level of scepticism than in France, Spain or Italy” (ibid.).

As the euro crisis deepens, so does the rift between Europe and Greece, north and south, member-state and member-state.

The divide also has an element of political left versus right, as well as fiscal conservatism versus fiscal liberalism.

Europe has long favored left-wing ideals, but current EU crises have created a backlash toward the right.

Detroit Free Press reported, “European solidarity is in shorter supply now than a year ago. In Denmark, Finland and the Netherlands, for example, populist right-wing parties have made significant electoral gains, led by politicians who often spout ‘Euroskeptic’ rhetoric about being yoked to countries they deem too different or irresponsible.”

With the growing divides and increasing number of schisms, any hope of recreating the European Family seems distant.

Churchill’s 1946 speech recalled Europe’s shared history: “This noble continent, comprising on the whole the fairest and the most cultivated regions of the earth; enjoying a temperate and equable climate, is the home of all the great parent races of the western world. It is the fountain of Christian faith and Christian ethics. It is the origin of most of the culture, arts, philosophy and science both of ancient and modern times.”

He continued, “If Europe were once united in the sharing of its common inheritance, there would be no limit to the happiness, to the prosperity and glory which its three or four hundred million people would enjoy.”

Churchill was describing a future united Europe, which is not surprising. In the past, Europe has come together. Why it did begins to reveal how it can overcome today’s struggles. Throughout the centuries, the continent has pulled together to ensure its habitants continue to live comfortably—to ensure their economic prosperity.

One of the first times Europe unified to protect its lifestyles was during the Roman Empire. Constantine united the people under one religion and ruled as an unchallenged emperor. By AD 321, Constantine established Sunday as part of the official state religion, thus legitimizing the various traditions attached to that day.

Under his watch, the empire enjoyed continual wealth and abundance. Edward Gibbon’s The History of the Decline and Fall of the Roman Empire describes the empire at that time, when the capital, Constantinople, “enjoyed, within their spacious enclosure, every production which could supply the wants or gratify the luxury of its numerous inhabitants. The sea-coasts of Thrace and Bithynia…still exhibit a rich prospect of vineyards, of gardens, and of plentiful harvests; and the Propontis has ever been renowned for an inexhaustible store of the most exquisite fish, that are taken in their stated seasons, without skill, and almost without labor.”

In short, with Constantine, the people had anything they wanted to gratify their desires. This pattern repeated throughout the centuries.

The decline of the Roman Empire sent Europe into a “transition” period under the Germanic tribes of the Vandals, Heruli and Ostrogoths. It emerged a disunited kingdom.

Then, in AD 554, Justinian routed the Ostrogoths and restored the size and grandeur of its land holdings to near that of the original Roman empire.

Later, Charlemagne was crowned emperor (AD 800) and renamed his kingdom the Holy Roman Empire. While some historians paint the life of the commoner as harsh under Charlemagne, others record that he used his expansive power for “increased royal concern for the helpless, continued efforts to strengthen royal administration, active diplomacy, the maintenance of religious reform, and support of cultural renewal” (Encyclopaedia Britannica). In the end, because his thinking on a politically unified continent has influenced European ambitions for centuries, Charlemagne has come to be known as the “Father of Europe.”

Otto the Great came next, crowned emperor in AD 962. His cultural reforms and use of the Roman Church to achieve peace made a secure empire.

He was followed by the Hapsburg dynasty of Charles V in AD 1520, and Napoleon’s reign, which began with his crowning in 1805. Both times, Europe again had emperors.

The most recent resurgence of the Holy Roman Empire began when Giuseppe Garibaldi united Italy in 1870, which culminated in the defeat of Adolf Hitler and Benito Mussolini in 1945. Oddly, even Hitler claimed he would create 1,000 years of “peace” for Europe.

In every case, the reasons were the same—unite for stability, prosperity and freedom.

The present seems to be bucking the pattern of history. As the European Union attempts to overcome economic hardship through unity, member-states seem to push each other away.

A common feeling across Europe was summed up by The Economist: “Alas, Greece’s austerity plan looks doomed to fail.” This realization is bringing out calls for drastic plans of action. According to Newsweek, “To save the euro, the euro zone may have to shrink to a small core of financially sound members. That is not yet on the agenda. But its time will come.”

What is Europe missing?

The European Union is still neglecting a key factor in the formula to bring themselves together. Look again at every time the continent has united. Constantine made Christianity the state religion. Charlemagne, Otto the Great, Charles V and Napoleon all ruled over the Holy Roman Empire, uniting church and state. Each time religion played a part. Religion is the tie that binds the European Family together. Without it, the continent can never truly unify.

Many find this notion implausible—impossible! With Christianity in decline across the continent, how could Europe again unite under the shared banner of religion? Yet there it is in the pages of history—over and over again, it was religion that brought Europe together.

But you do not need to rely on history alone for evidence. Europe will have a crucial role to play in the coming years, and it can be understood in astounding detail. 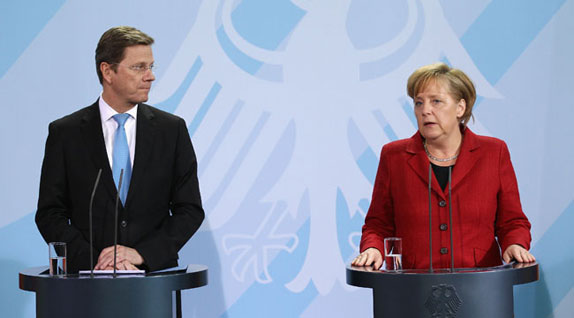 Europe’s $1 Trillion Bailout – Can Germany Keep the EU Afloat?
With billions of dollars pledged to keep Greece and the entire eurozone from drowning financially, Germany has been pushed to take a leading role in the future of the EU.