This website requires the use of Javascript to function correctly. Performance and usage will suffer if it remains disabled.
How to Enable Javascript
Europe’s Culture Clash

The experiment of Europeans and Muslim immigrants living side by side strains under the weight of age-old problems. 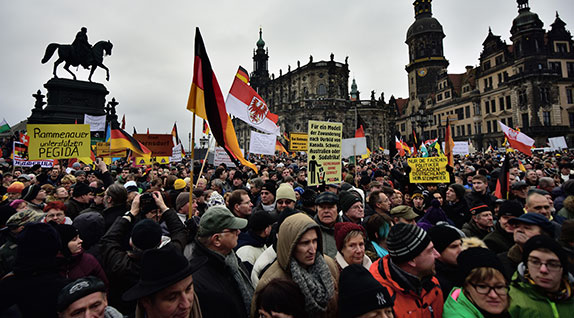 Mehmet Kaman/Anadolu Agency/Getty Images
Against multiculturalism: Supporters of the PEGIDA (Patriotic Europeans Against the Islamization of the West) movement protest with banners and German flags at the Theaterplatz Square in Dresden, Germany (Jan. 25, 2015).

Multiculturalism drives the European Union. Defined by Collins English Dictionary as “the policy of maintaining a diversity of ethnic cultures within a community,” it is a word that the continent prides itself on understanding and embracing.

Europe’s motto, “Unity in Diversity,” says it all. The Schengen Agreement allows EU citizens and immigrants to move through the continent’s 28 member states with relative ease. Its policies, which serve a potpourri of ethnicities, languages and religions, champion distinct cultures peacefully coexisting.

Think of Paris, France: first there was the January 7 Charlie Hebdo shooting with 12 dead and the kosher market with four killed just days later. Then there were the thwarted plots in Belgium with two aspiring terrorists killed in a police shootout. These early 2015 events forced Europe to put multiculturalism back under the microscope. More specifically, they pushed the continent to reexamine the idea of Muslims in Europe.

Politicians emphatically condemned the attacks, but most also made clear that multicultural policies were not to blame.

British Prime Minister David Cameron decried the first attack as “sickening” on his social media account. Yet later he stated “that what is happening in terms of extremist terror has nothing to do with the true religion of Islam…It’s being perverted by a minority who have been radicalised.”

After the Charlie Hebdo shootings, over 70 world leaders—including Israeli Prime Minister Benjamin Netanyahu and the Palestinian Authority’s Mahmoud Abbas—as well as 1.6 million people marched in the streets of Paris as part of a unity rally.

French President Francois Hollande pledged to protect his nation’s 4.7 million Muslims, which is 7.5 percent of the population. He also said that Islam and democracy were compatible and that “it is Muslims who are the first victims of fanaticism, fundamentalism and intolerance” according to BBC.

Yet the spate of terror attacks also fomented anti-Muslim sentiments among some Europeans.

One such group, called Patriotic Europeans Against the Islamization of the West (PEGIDA), saw its supporters swell after the Charlie Hebdo attack. CNN reported that police stated that “the number of people attending these rallies…increased from an estimated 350 protesters on October 20 to 18,000 on January 5 and 25,000” a week later in Dresden, Germany.

Other nations have anti-Islam movements. A New York Times article, “In Sweden, the Land of the Open Door, Anti-Muslim Sentiment Finds a Foothold,” highlighted growing apprehension over the flood of Muslim immigrants to the nation.

In addition, The Independent stated: “Twenty-six mosques around France have been subject to attack by firebombs, gunfire, pig heads, and grenades as Muslims are targeted with violence in the wake of the Paris attacks.”

Has the diversity experiment failed in Europe?

Really, this is the wrong question. The EU must continue to embrace multiculturalism. With 28 member states that have distinct cultures and languages, its existence depends upon it. This is why its leading politicians so roundly defend it.

A better question is this: Has the experiment of non-assimilated Muslims failed in Europe?

Europe’s major multicultural problems stem from immigration and assimilation. Most migrants come from nations where Islam is by far the leading religion.

The steady stream of immigrants to the EU is understandable. Europe offers relief from the countless problems in the Middle East such as the war in Syria, a shaky Libya, and widespread drought throughout the region.

Yet many native Europeans are wary of continuous waves of immigrants. A poll reported by The Independent indicated that 77 percent of Britons want a cut in immigration levels while 56 percent want it cut by a lot.

In addition, Pew showed that 33 percent of Germans have an unfavorable view of Muslims in their country.

Why should Europe, which has long promoted religious freedom, fear an influx from Muslim nations? The answer runs deeper than the terror stigma Islam has gained as a result of incidents such as the United States September 11 attacks and the 2005 London subway bombings.

The current wave of European immigration started just after World War II as the economies of devastated nations began to bounce back in the 1950s and 60s.

To meet the growing demand for workers, Europeans recruited immigrants to do jobs they were unwilling to do. These were deemed “guest workers.” Most people expected they would eventually return home after working several years.

After the 1973 OPEC oil crisis triggered an economic slowdown, many European governments stopped issuing work visas—but by then it was too late. Having settled into life in their adopted countries, most temporary migrants never returned home, and instead convinced family members to live with them in Europe.

Natural disasters, weak economies, and abject poverty spurred another migration wave in the 1990s, this time by refugees primarily from North and sub-Saharan Africa, and the Indian subcontinent. As more arrived, Europeans permitted them to receive welfare benefits, even if they had never worked in the EU. This was especially true of those who claimed refugee status.

Because many immigrants did not know the languages of their new countries, they began to congregate in specific neighborhoods with others from their home countries. This gave rise to the large immigrant neighborhoods characteristic of European cities.

Numerous problems have resulted. Immigrant communities tend to be poorer, and have higher crime and unemployment statistics. They often cite harassment from law enforcement as the reason for their troubles with the law and non-acceptance by the indigenous population for why they have not integrated.

These circumstances have created a generation of young people who do not identify with the European countries in which they were born.

“As morally indignant young Muslims turn away from what they view as decadent German culture, some are cultivating feelings of superiority,” a Der Spiegel article stated. While it was written in 2008, it still holds true today.

It continued: “While their immigrant parents and grandparents tried to assimilate, at least on the surface, some young Muslims deliberately flaunt the fact that they are different by wearing strict Islamic clothing in public.”

According to a survey by the newspaper, 71 percent of Muslims believe “sexual morals in Western society are totally degenerate” and 65.6 percent believe “Islam is the only true religion.” These ideas clash with the relaxed approach many Europeans take toward lifestyle choices, including the way they view religion.

Although the two cultures believe they possess completely different mindsets, they actually have more in common than they realize, according to Der Spiegel: “Ironically, many Muslims in Germany ‘tend to be lax when it comes to religion,’ says Katajun Amirpur, a Berlin expert on Islamic studies. According to Amirpur, religion ‘doesn’t play a very dominant role’ in their daily life, and yet they would characterize themselves as devout Muslims—even if they ‘occasionally drink a glass of Arrak or Raki’ [liquor] and ‘sometimes forget one prayer or another.’ They are easily their Christian fellow citizens’ equals when it comes to disobeying the commandments of their faith.”

Why then are they not able to easily co-exist?

Just as “multiculturalism” is generally a code word for tensions between Europeans and immigrant Muslims, “Europe” is a code word for Christendom. The continent’s historical roots are steeped in traditional Christian culture, teachings, morals and values. Put simply, multicultural problems in Europe are a result of tensions between two religions: Christianity and Islam.

In a forum sponsored by Pew Research, Bernard Lewis, Professor Emeritus of Near Eastern Studies at Princeton University, said the source of the Islam and Christendom conflict does not come from the two religions’ differences, but their similarities.

“These two religions, and as far as I am aware, no others in the world, believe that their truths are not only universal but also exclusive,” Mr. Lewis said. “They believe that they are the fortunate recipients of God’s final message to humanity, which it is their duty not to keep selfishly to themselves…but to bring to the rest of mankind, removing whatever barriers there may be in the way.”

Because both believe they hold the key to human salvation, Mr. Lewis said tensions between Christendom and Islam occur because each have “aspired to the same role”—bringing God’s message to the whole world—“each seeing it as a divinely ordained mission.”

How does this apply to today, a time in which many people call Europe a post-Christian continent? Even though Europe is not dominated by religion as it once was, centuries of Christianity’s fingerprints are still found across the continent.

“In order to understand what is going on, one has to see the ongoing struggle within this larger perspective of the millennial struggle between the rival religions…” Mr. Lewis said.

The scars from the competing religions can most easily be found on Jerusalem’s Temple Mount, which switched hands repeatedly during the Crusades. Muslims took the mount in A.D. 700 and built the wooden Al-Aqsa mosque on the foundation of a Roman temple. Christian crusaders then violently seized the Holy Land and, in the early 12th century, reconstructed an earthquake-damaged Al-Aqsa mosque as the Temple Solomonis and the Dome of the Rock, renamed the Temple Domini. Crusaders revamped both buildings, adding altars, icons, new mosaics, and Christian inscriptions. Crosses replaced crescent moons.

In 1187, Muslims recaptured the area and reclaimed the mount’s two mosques. Islamic followers purged the Catholic icons and renovated the marble mosaics and inscriptions. These two mosques remain standing today.

During that time, Christian Europe clashed with the Islamic caliphate, constantly shifting control of the land. The caliphate, a Muslim empire established after Muhammad’s death and ruled by a caliph, clashed with the Byzantine Empire, the Holy Roman Empire, and then Western European empires. It was not until 1924 when the creation of the Turkish Republic deposed the last caliph that this religious rivalry faded from view.

Since that time, entire generations of Europeans have grown up not understanding the constant battles that once took place between the rival belief systems.

Therefore, when they were presented with the idealistic option of a multicultural society, it seemed a good idea. Indeed, the concept was born out of a desire for tolerance and peace.

But history makes one point clear: these two religions struggle to coexist. Today, when EU Christendom and Muslim immigrants alike refuse to give up their respective cultures, it should come as no surprise. These two religions have never budged.

The potential for clashes between Europeans and Muslim immigrants is not going away anytime soon. Substantial shifts in the continent’s demographics make this clear.

According to Newsweek, the number of deaths is expected to outnumber births in 10 EU member-states in 2015.

Put this in perspective. Starting in 2015, Europe’s population will experience negative natural population growth, and by 2050, the population is projected to decrease by as much as 52 million from its present level.

In a separate report, the United Nations said that Europe needs as many as 1.6 million immigrants per year just to maintain the current population level through to 2050. This represents at least 60 million new residents—many of whom will adhere to Islam.

While the European birthrate drops, the number of Muslims in Europe is projected to surge over the next 15 years. Given these statistics, for the EU to emerge as a true economic superpower, they have one choice: European Muslims and Christians must learn to get along.

Multiculturalism is here to stay.