This website requires the use of Javascript to function correctly. Performance and usage will suffer if it remains disabled.
How to Enable Javascript
Why the Obsession with Britain’s Monarchy?

Why the Obsession with Britain’s Monarchy?

Whether it is a royal wedding or birth of new prince, the public’s interest in the royal family carries more significance than most realize. 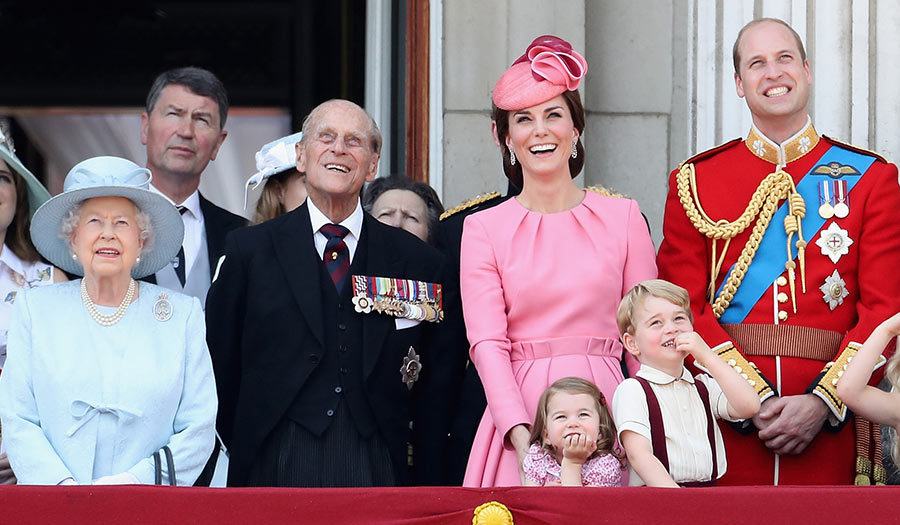 From left to right, Queen Elizabeth II; Prince Philip, Duke of Edinburgh; Catherine, Duchess of Cambridge; Princess Charlotte of Cambridge, Prince George of Cambridge, and Prince William, Duke of Cambridge, look out from the balcony of Buckingham Palace during the Trooping the Colour parade in London, England (June 17, 2017).

Prince William and his wife, Duchess of Cambridge Kate, emerged from St. Mary’s Hospital in London in the late afternoon of April 23, holding a tiny, newborn royal highness, wrapped in a white lace shawl.

Television crews, journalists and royal fans had set up camp outside London’s St. Mary hospital for the “royal baby watch” since early April in anticipation of the arrival.

After posing for dozens of photographers and camera crews outside the hospital, the trio headed home, with the baby nestled securely in a car seat. Television news helicopters followed the royal Range Rover as it made the mile journey to the family’s Kensington Palace residence.

News of the royal birth came with a mix of tradition and modernity typical of Britain’s media-savvy royal family. It was announced on Twitter and also proclaimed in the forecourt of Buckingham Palace with a framed notice perched on a golden easel.

A town crier showed up in full regalia to declare the newborn prince’s birth outside the hospital. The words “It’s a boy” flashed in lights around the top of London’s BT Tower, which can be seen for miles around.

Across the world, fans of the royal family swooned over the news as much as they do about anything regarding the royal monarchy, from daily updates on Prince Harry’s engagement with American actress Meghan Markle to the Netflix series “The Crown,” a historical drama about Queen Elizabeth II.

Some of the biggest waves of focus come from weddings such as the 2011 marriage of Catherine Middleton to Prince William. In the U.S. alone, over 23 million woke up early to watch the televised event. American celebrities even hosted galas, activity centers sponsored tea parties, and web-savvy middle-class workers eagerly snatched up monarchy memorabilia. Television channels dedicated hour-long specials to interviews with those involved in royal-wedding preparations and featured shows about the lifestyles of princes and princesses.

The fascination over the monarchy puzzles many. The British Empire has long ago faded into history, and the royal family’s political role has been so reduced that it has essentially become more symbolic. So why the enduring global interest in the British monarchy?

The reason lies in the roots of the monarchy itself.

Amid the excitement of the 2011 wedding, there was growing interest in the royal family’s lineage, particularly that of Catherine Middleton.

Of the new duchess, a Guardian columnist wrote: “She brings fresh blood into the royal family, offering the prospect of a new generation and a secure succession. For William, this may have been a wedding. For the institution of monarchy, it was a blood transfusion.”

PBS reported: “…although coverage of this royal wedding, especially in the British media, focuses on Kate Middleton’s family lineage of three generations of coal miners, the great-great-great-great-grandmother that really counts is Queen Victoria, who reigned from 1837 to 1901. She and her German consort, Prince Albert of Saxe-Coburg and Gotha, produced nine children, and the consequences rippled through the tumultuous history of Europe well into modern times. Indeed, dynastic marriages and arrangements, so symbolic of an old Europe, were at the heart of a conflict that brought about its end—World War I from 1914 to 1918. Three of the major warring nations—Britain, Germany and Russia—were ruled by two grandsons and a grandson-in-law of Queen Victoria. By war’s end, only the British monarchy would remain.”

For centuries, British kings and queens have played a crucial part in world events. Yet to truly comprehend the incredible legacy of England’s monarchy, one must trace it back to well before Victorian times, even prior to the period of English and Scottish monarchs, who reigned from AD 400 to 1603.

The New York Genealogical and Biographical Society brings a different perspective regarding the fascinating history behind Britain’s royal family, and details the royal lineage, using the Bible to support its findings. In 1921, the organization wrote in its quarterly publication: “…admitting that the covenants of the Old Testament are to be accepted as utterances upon divine authority, we have the covenant as uttered in Genesis [49:10]—‘The sceptre shall not depart from Judah, nor a law giver from between his feet until Shiloh come; and unto him shall the gathering of the people be.’”

“With this covenant as a basis of argument, supported by the accepted genealogies of the Old Testament, we have it proven that the sceptre did remain in the house of Judah in unbroken line until the reign of Zedekiah.”

The promise of Genesis 49 is often called the scepter promise. It refers to an unbroken royal line that began with King David, who came from Judah.

King Zedekiah’s daughter Tea Tephi was taken to Ireland, where she married Eochaidh, thus continuing the line of King David.

The New York Genealogical and Biographical Society continued: “By this union of two strains of the blood of Judah in the marriage of Tea Tephi and Eochaidh, the covenant that the sceptre should not depart from the house of Judah was perpetuated; and by the evidence of the Annals of the Irish Kings and those of the Kings of Scotland we are furnished a substantial argument…that the sceptre continued in the house of Judah by the way of the Irish Kings and thence by intermarriage, by way of the Scottish Kings, and again by direct descent, by the way of the English Kings, to the present representative of British Sovereignty, King George V of England, in whose person is perpetuated the covenant to the house of Judah.”

The link between the British monarchy and Davidic line does not end there. At each coronation of a British monarch, the Stone of Destiny, a rectangular sandstone block reported to have traveled from Israel, was present.

Encyclopaedia Britannica states: “According to one Celtic legend the stone was once the pillow upon which the patriarch Jacob [a direct ancestor of David] rested at Bethel when he beheld the visions of angels. From the Holy Land it purportedly traveled to Egypt, Sicily, and Spain and reached Ireland about 700 BC to be set upon the hills of Tara, where the ancient kings of Ireland were crowned.”

The stone was then moved to Scotland, where it was used in the coronation of Scottish kings. Since 1307, the stone has been used at the crowning of British monarchs.

During King David’s reign over ancient Israel, God expanded the scepter promise: “And when your [David’s] days be fulfilled, and you shall sleep with your fathers, I will set up your seed after you…and I will establish the throne of his kingdom forever…And your house and your kingdom shall be established forever before you: your throne shall be established forever (II Sam. 7:12-13, 16).

God promised that He would never allow the Davidic line to end. And God never breaks His word. He declares: “I have spoken it, I will also bring it to pass; I have purposed it, I will also do it” (Isa. 46:11). When God says a throne will be established forever, He means it!

Therefore, David’s throne must exist somewhere on Earth today. And it must be a long-held line. What other unbroken monarchy has historical ties to ancient Israel? What other lineage of kings and queens are coronated on Jacob’s pillow stone?

After David died, his son Solomon reigned in his place: “Then Solomon sat on the throne of the Lord as king instead of David his father, and prospered” (I Chron. 29:23).

Notice that it is “the throne of the Lord”—not of David!

In the New Testament, the same promise is confirmed. In Luke 1, an angel told the mother of Jesus, “…you shall conceive in your womb, and bring forth a son, and shall call His name Jesus. He shall be great, and shall be called the Son of the Highest: and the Lord God shall give unto Him the throne of His father David: and He shall reign over the house of Jacob forever; and of His kingdom there shall be no end” (vs. 31-33).

While men and women—now in the form of the British monarchy—have been occupying David’s throne for thousands of years, it is ultimately Christ’s throne—which He will claim.

Watching a marriage celebration within the British monarchy—which can lead to an heir to the throne—should remind you that God has kept His scepter promise. And just as God also promised, Christ will come back to eventually claim the throne.

God also prophesied a blessing that the descendants of Jacob, including Britain and the United States, would receive. He stated, “be fruitful and multiply; a nation and a company of nations shall be of you” (Gen. 35:11). (Read David C. Pack’s book America and Britain in Prophecy to learn how God has delivered what He promised.)

What the Future Holds

The purpose of kingdoms and governments should be to bring order, peace and prosperity. Ideally, they will look out for the well-being of their citizens.

While manmade governments can never fully or permanently deliver on these promises, when Christ claims His throne, it will be markedly different. Isaiah 9 describes Christ’s coming reign: “For unto us a Child is born, unto us a Son is given: and the government shall be upon His shoulder: and His name shall be called Wonderful, Counselor, The mighty God, The everlasting Father, The Prince of Peace. Of the increase of His government and peace there shall be no end, upon the throne of David, and upon His kingdom, to order it, and to establish it with judgment and with justice from henceforth even forever” (vs. 6-7).

Unknown to most, this is the same Kingdom of God that Christ announced throughout His earthly ministry. He preached the gospel of the Kingdom, not a gospel about Himself! Read Matthew 6:33, Mark 1:14 and Luke 4:43.

Jesus Christ will return and rule—forever—on the very real, continuing throne of David!

Contrary to those who support the racist idea of “British Israelism,” which equates the nation’s former empire with God’s Kingdom, Christ’s soon-coming reign on the throne now held by England’s monarchy does not make Britons superior. The Kingdom of God will grow into a global supergoverment that will bring peace and prosperity to all nations: “And there was given [to Christ] dominion, and glory, and a kingdom, that all people, nations, and languages, should serve Him: His dominion is an everlasting dominion, which shall not pass away, and His kingdom that which shall not be destroyed” (Dan. 7:14).

To learn more, read How God’s Kingdom Will Come – The Untold Story!