This website requires the use of Javascript to function correctly. Performance and usage will suffer if it remains disabled.
How to Enable Javascript
World News Report: October 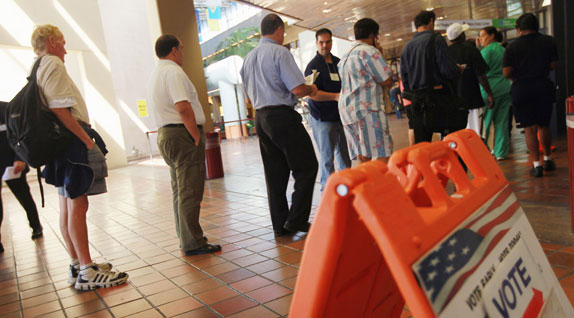 Joe Raedle/Getty Images
Early voting ahead of Election Day: People wait in line to cast early votes for the midterm elections at a polling station set up at the Miami-Dade Government Center in Miami, Fla. (Oct. 18, 2010).

World conditions make absolutely clear that we are now in the final run-up period toward the fulfillment of the Bible’s most awesome—and awful—prophecies! All one must do is even briefly read a single day’s news and it becomes obvious that events are speeding up in an unprecedented way.

In the United States, an election cycle unlike any ever seen in this country is taking place. The midterm elections will be held November 2. Stakes have never been higher for the Democratic and Republican parties—but also for the United States itself, and the free world, which is directly tied to everything that happens here. Both American political parties are now in an all-out information war for control of the government. The national record for personal political campaign spending was shattered by a California gubernatorial candidate who has already spent over $160 million of her own money on her campaign—the largest private contribution of any candidate in American history. Every form of fraud, cheating, corruption, bribery, outright lying, smearing opponents and political dirty tricks known to the history of democracies in every age is being employed to gain votes. And reports of these things are rampant in the news. The most basic level of human trust among the citizens of this country appears to have been destroyed. I have never witnessed anything like what is happening now!

The Republicans are now almost unanimously expected by a wide margin to take back the House of Representatives, and possibly also the Senate (although this is considered unlikely). The significant majority of Americans now view their government as a runaway that is wildly overspending beyond the country’s means and has become irresponsible in the extreme.

In Haiti, a recent and sudden outbreak of cholera has now affected thousands of people in the aftermath of the earthquake that struck near the country’s capital. (As many as 300,000 people were killed in the quake.) As of today, nearly 5,000 have been infected, and the number of cholera deaths has already reached over 300. Officials worry that the disease could quickly spread to the 1.3 million tent-dwellers who still live in camps just outside the destroyed capital, Port-au-Prince. If the disease is not kept out of the camps, Claude Surena, the president of the Haiti Medical Association, stated, “The worst case would be that we have hundreds of thousands of people getting sick at the same time” (The Associated Press). The condition in Haiti speaks to how the Revelation 6 pale horseman of disease and “earthquakes in various places” (Matt. 24:7) come together to form even more horrific conditions. This will soon be seen to be just the beginning.

A “super typhoon” struck the Philippines about 10 days ago. The Philippine National Red Cross chairman Senator Richard Gordon said, “It’s a very, very big typhoon that’s hitting our country, biggest in the last 20 years” (BBC/Reuters). Typhoon Megi, which killed at least 28 people in the Philippines, was the 10th to hit the country so far this year. In China, the storm forced more than 300,000 to evacuate their homes. Megi also hit Taiwan, causing landslides and flooding that killed dozens of people.

Then there was the tremendous 7.8-magnitude earthquake that struck under the ocean just off Indonesia (Sumatra) this week. The quake caused a 10-foot-high tsunami that wiped out a number of villages and killed around 488 people. This number is expected to rise as rescuers continue searching for the missing, known to be in the hundreds.

To make matters worse, Mount Merapi, the country’s most active volcano, erupted, killing 38 people. There have already been six eruptions of this volcano. Recognize that these two disasters hit within just 24 hours of each other. They become another way that an earthquake can come together with a second kind of devastation, in this case one that it directly triggers (volcanic eruptions), to again form much more amplified terrible conditions. Incidentally, two other volcanoes have become active in the far east of Russia in Kamchatka, and they are sending absolutely tremendous ash clouds into the air, causing the diverting of flights. Again, as with earthquakes, which are connected to volcanoes, this is only the beginning.

In France, government proposals to raise the retirement age from 60 even to just 62 in order to implement financial reform has led to widespread protests across the country. Unions organized one million trade union workers, joined by angry students and youth, and took to the streets to protest the supposedly unfair government plans. Due to fuel shortages, schools and oil refineries were shut down. Of the nation’s 13,000 gas stations, around 4,000 were without gasoline. Thirty percent of the flights at the nation’s busiest airport were cancelled, along with 50 percent at the Paris Orly airport. The retirement measure was passed last week, and French President Nicolas Sarkozy has vowed to fight back against the protests.

These protests are an attempt by French citizens to save what they feel are their civil rights. To accomplish their ends, the plan is to hold the country hostage by shutting down transportation and the shipment of goods. This is essentially a form of national economic suicide. But of course the protestors, along with the union organizers, do not see it this way. This is just another example of how man has failed to govern himself and human governments are ultimately unable to provide for their citizenry. This entitlement thinking is destroying many European countries, and is also creeping into the American mindset.

Other modern-day Israelite nations of the West cannot be far behind their French brother Reuben in these forms of public demonstration and riot. The exact same forces are at work in America, but they are just not yet quite as open in tactics. Keep watching!

Finally, I am thrilled to announce that the daily 15-minute World to Come audio program (Monday through Friday, posted at noon daily) has begun. I urge all readers of The Real Truth to listen each day as I analyze world trends in light of Bible prophecy. You will find that this program answers life’s big questions—those that few seem willing to address. Be sure to listen daily!