This website requires the use of Javascript to function correctly. Performance and usage will suffer if it remains disabled.
How to Enable Javascript
French Youth Fuel Riots – Behind the Chaos 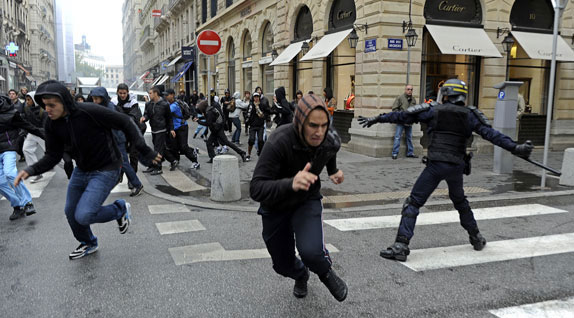 Philippe Desmazes/AFP/Getty Images
Street clashes: Youth scramble as anti-riot police work to break up a protest in the city of Lyon (Oct. 20, 2010).

The reason for their rage? French President Nicolas Sarkozy’s pension reform bill. The legislation raises the retirement age from 60 to 62 years of age and increases the full state pension age from 65 to 67. 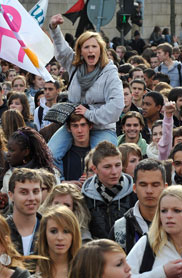 Many high school youth said they are protesting because they believe they will not be able to find employment once the retirement age law goes into effect, The Globe and Mail reported.

“All of us want to get good jobs,” a boy who skipped school to protest told the paper. “I will have to study for a long time and I don’t want to be out of work when I graduate. That would be a big waste of time.”

Other youth claim the decision could also have future implications on their ability to take longer vacations and result in the elimination of state subsidized healthcare, with Daily Mail reporting that one student even declared he would storm the Senate, if necessary. “The government has pushed us to the brink and has threatened our entire future,” he said.

Student protests are one of the biggest concerns to the French government, said Jean-Francois Cope, a Sarkozy supporter and member of the French National Assembly. In 2006, labor legislation, which allowed youth to be fired more easily, prompted some of the country’s most widespread riots by students demanding that then-Prime Minister Dominique de Villepin rescind the law.

“I am very concerned because when students take to the streets, there is always a risk of serious problems,” Mr. Cope told a French radio station. “Students should understand the reforms are being made for them’” (ibid.).

Franck Prevel/Getty Images
Path of destruction: A burned car lies in the street after clashes with riot police in Paris (Oct. 19, 2010).

Nationwide fuel shortages have shut down schools and oil refineries, and virtually paralyzed traffic. Just under 4,000 gas stations of 13,000 countrywide are awaiting supplies. The nation’s busiest airport, Roissy-Charles de Gaulle, was forced to cancel 30 percent of its flights, while Paris Orly canceled 50 percent. Airport employees have been told they must walk to work and many travelers have had to transport their own luggage.

According to Daily Mail, France has “less than 100 days of oil stocks” and “the government is already drawing the 30-day emergency reserves.” Because of the shortages, several planes were forced to take off without enough fuel to reach their destinations.

The unrest has triggered concern that France could face a large-scale revolt against the government, as happened in May 1968 when millions of student protestors threatened to restart the French Revolution and overthrow President Charles de Gaulle.

French Labor Minister Eric Woerth said the government’s plan will save the nation billions and is the only way to assure that citizens—including the students protesting—will receive their pensions in years to come.

“This reform is essential,” President Sarkozy said. “France is committed to it. France will carry it out” (Agence France-Presse).

Yet according to a French research poll, up to 70 percent of the population supports the protests. This prompts the questions: Where does this attitude of entitlement come from? How does a country plagued by such a mindset hope to survive?

“…This week’s uproar in France symbolizes a financial reality that many advanced nations will have to face,” a Christian Science Monitor editorial stated. “Economic hard times in the wake of a deep recession are coinciding with long-run fiscal challenges that require politically difficult choices. Whether the country is America or France, there’s more fuel for potential social unrest than there was five years ago.”

In 2005, The Real Truth magazine reported on the reason behind such an attitude—and the main reason France is experiencing the kind of violence it is.

“Civilization today pictures a humanity that takes to itself whatever it wants—and is willing to hurt others in unimaginable ways just to satisfy lusts. Clearly, human nature—with its selfishness, violence and brutality—plagues mankind. And it particularly rears its ugly head when people are under extreme duress.”

France is not the first to experience such violent behavior from its youth—and will certainly not be the last. To learn of the real cause behind the riots, read our article “Human Nature – Exposed!”

Human Nature – Exposed!
It is seen and felt in every corner of life. From the wealthy to the poor, from youth to the elderly, from the most vile criminal to the most generous giver—no one can escape its grasp. Here is the ugly truth about the carnal, natural mind of man.