This website requires the use of Javascript to function correctly. Performance and usage will suffer if it remains disabled.
How to Enable Javascript
An Uncertain Coalition – Can Britain’s New Government Deliver?

The British populace turned away from 13 years of Labour Party rule in favor of the center-right Conservatives and left-wing Liberal Democrats, resulting in a surprising coalition. Along what path should the new government take the British people? 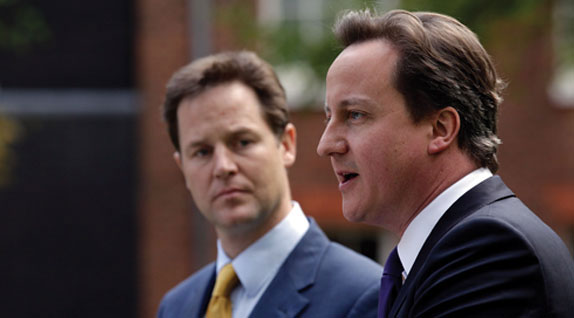 After a bitterly fought general election in May 2010, resulting in a hung Parliament, two radically different political parties—the center-right Conservative Party and the left-wing Liberal Democrats—came together to form a coalition government. Conservative David Cameron became the new prime minister and Liberal Democrat Nick Clegg became deputy prime minister. Both vowed to put aside their differences and work together to chart a new course for the country.

In his first joint press conference with Mr. Clegg, Prime Minister Cameron stated, “But today, we are not just announcing a new government and new ministers; we are announcing a new politics. A new politics where the national interest is more important than the party interest, where cooperation wins out over confrontation, where compromise, where give and take, where reasonable, civilized, grown-up behavior is not a sign of weakness, but a sign of strength.”

Deputy Prime Minister Clegg added, “Until today, we have been rivals: now we are colleagues. That says a lot about the scale of the new politics which is now beginning to unfold. This is a new government and a new kind of government. A radical reforming government where it needs to be. And a source of reassurance and stability, too, at a time of great uncertainty in our country” (The Guardian).

Before the coalition was formed, election results showed the nation was split three ways. While many chose to move away from Labour Party rule, 29 percent wanted a continuance of that government and voted for it. Another 36 percent endorsed the Conservatives, which they hoped could bring stability to the economy. Still others—26 percent—voted for the Liberal Democrats, hoping for a party to preserve and expand the sweeping social programs Britons have come to expect.

The new government is taking power at a crucial time in Britain’s history. The country faces a multitude of challenges. Its economy is in crisis, its political future cloudy, and its social fabric close to the breaking point. Clearly, this once-great nation is in steep decline.

What path will Britain take?

Seeds for the coalition government were sown in the 2010 British election, which left no clear majority party.

In contrast, the Liberal Democrats espouse the values of “social responsibility,” including increased government programs to take care of the disadvantaged, higher taxes, fewer military activities around the world, increased government spending, and a pro-Europe stance. Deputy Prime Minister Nick Clegg said the new government would be a “bold, reforming government that puts fairness back into Britain” (ibid.).

Despite their differences, the coalition has promised to:

In addition, the new coalition government has made it clear that the country will not join the euro within the next five years, and that it will not forge closer relationships with Europe without a public referendum.

The recent election results appear to demonstrate that voters are unsure who can pull them out of the many crises they face.

According to the Office for National Statistics, more than one in four Britons do not have a job, with the majority—10.6 million unemployed people—having stopped looking for work. The country’s budget deficit is poised to exceed 12 percent of national income if it does not implement cuts in government spending. This would put it on a level with Greece.

As further confirmation of this once mighty nation’s economic decline, according to the economic think-tank Centre for Economics and Business Research, Britain will likely drop out of the world’s top 10 economies by 2015.

Despite this grim scenario, Britons are spending recklessly. According to Credit Action, a non-profit financial management charity, the savings ratio for the average person is low, at 6 percent, and more than half have said they struggle to keep up with bills and credit commitments. The country’s household debt is a staggering 170 percent of its annual national income, and 35 percent of Britons are prepared to go into debt to pay for a holiday.

This attitude was summed up by a consumer, who told The Guardian, “I’m spending more on cosmetics, jewelry and clothes than a couple of years ago. It makes me feel better…I can’t see the point in saving because of low interest rates. I don’t have much disposable income, so what I do have I would rather spend on treating myself.”

Britain today is but a pale shadow of the country it once was. Britons living one hundred years ago would not recognize the character of their fellow citizens: the constant partying, bad manners, broken families, and spending beyond one’s means would shock them.

Almost half of all children are now born outside of wedlock and marriage has declined to its lowest level since records were first kept. The London Evening Standard reports that only 50 percent of adults are married. On top of that, one quarter of Britons binge drink, with one Daily Telegraph headline proclaiming, “Binge drinking is as British as rain.”

Perhaps surprisingly, though, more than 50 percent of Britons believe the number one problem for the country is bad manners.

While the leaders and media pundits propose economic, political and social solutions, the true source of Britain’s problems lies in the character and lives of its citizens. Britain has turned from the old paths—from a time in which they were known for their sense of decorum, manners and etiquette. A time when the king deemed it necessary that everyone be able to read the Bible and ordered what is now recognized as the King James translation, which is still widely used today.

Consider what the translators said in the introduction of the King James Authorized Version: “But how shall men meditate in that which they cannot understand? How shall they understand that which is kept close in an unknown tongue…Translation it is that opens the window, to let in the light; that breaks the shell, that we may eat the kernel.”

It is this Bible that states, “Thus says the Lord, Stand you in the ways, and see, and ask for the old paths, where is the good way, and walk therein, and you shall find rest for your souls. But they said, We will not walk therein” (Jer. 6:16).

The nation’s problems are spiritual—the result of sin—disobedience to God (I John 3:4). Regarding God’s commandments, Britain as a nation has turned and cried, “We will not walk therein.”

This great nation—which once “had it all”—has forgotten the God who gave it blessings.

England’s problems cannot, and will not, be turned around unless its spiritual problems are addressed. No manmade coalition, even with the best intentions of working together, can deliver true peace and prosperity to its citizens.

Not until the nation turns to the old paths outlined by God, designed to bring abundant and happy lives, will it finally “find rest” from the countless problems plaguing it.