This website requires the use of Javascript to function correctly. Performance and usage will suffer if it remains disabled.
How to Enable Javascript
The Human Problem – Would the Planet Be Better Off Without Us?

Would the Planet Be Better Off Without Us? 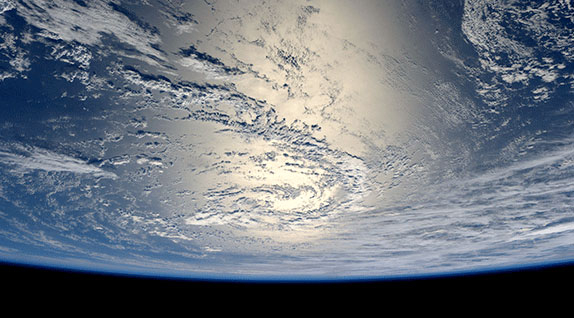 Alexander Gerst/ESA via Getty Images
Planet earth: A German European Space Agency astronaut took this image of Earth reflecting light from the sun while aboard the International Space Station (July 17, 2014).

In a 2004 Hollywood thriller about the catastrophic effects of a climate gone haywire, the heroes face tidal waves, sudden deep freezes and other threats due to manmade weather upsets. Eventually, the worst is over and humanity prepares to rebuild, triumphant as usual.

The closing scene features two astronauts in the International Space Station looking down at an Earth that is icebound from the North Pole nearly to the Tropic of Cancer. Millions or billions have evidently perished, but the planet now has a pristine atmosphere with no visible pollution. Earth has healed itself. One of the astronauts comments on how beautiful this picture is.

The film, which grossed half a billion dollars worldwide despite being discredited by some for scientific inaccuracy, ends with what amounts to a harsh criticism of how mankind affects the Earth.

But is a half-emptied planet with better air quality heartwarming?

More recently, a popular television series has theorized what the planet would be like “after people.” It depicts nature reclaiming cities, presumably after humans are extinct. Buildings decay and collapse, while meadows, wetlands and forests reappear.

This raises the uncomfortable question: Are we the problem? Would an Earth without human beings be a better place?

Those who take a long look at mankind’s treatment of the planet have reason to be discouraged.

Widespread use of coal as fuel began to affect air quality in the early second millennium AD. With the Industrial Revolution, the environment in Europe’s largest cities began to deteriorate rapidly. At its worst, smog choked urban areas, sometimes killing scores or even hundreds of residents at a time.

By the mid-1800s, London and other factory-dense cities in Britain were nicknamed the Big Smoke. Ash would literally rain from the sky, soiling clothing and layering the landscape in grime. At the same time, mass dumping of human waste into the River Thames led to the phenomenon called “the Big Stink,” with London enveloped in a near-intolerable stench.

Fast-forward to the modern world. In any populated area, the signs of human impact are now unavoidable.

Heavy use of nitrogen- and phosphorus-based fertilizers along the Mississippi River has created a “dead zone” in the Gulf of Mexico—an area in which the water’s oxygen levels are too low to support a body of water’s normal flora and fauna. This zone’s size is estimated to be 5,052 square miles, about the size of Connecticut. Other dead zones are found on the Oregon coast, Lake Erie, Chesapeake Bay, and the Baltic and Black Seas in Europe.

The waters of Puget Sound, next to coffee-fueled Seattle, are literally caffeinated, as wastewater treatment plants cannot remove all of this stimulant. In similar fashion, female hormones, a byproduct of birth control pill use, now contaminate rivers and streams, sometimes leading to infertility in male fish.

Due to Midwest pollution snaking its way up to Maine and out to the Atlantic, causing acid rain, some lakes in New York’s storied Adirondack State Park are no longer able to support fish populations. While this is a relatively small number of the region’s abundant lakes, this is a reminder that man’s activity can touch even the most seemingly remote and pristine places—from a distance.

Further north, the stunning blue-green waters of Lake Louise in Canada’s Banff National Park, a renowned symbol of the nation’s natural beauty, are now shadowed by “unsafe to drink” signs.

Not even the deep ocean is safe. The Eastern Garbage Patch, considered the world’s largest “landfill,” is a floating collection of marine debris, including plastics and chemical waste, swirling in the North Pacific. It is estimated to be larger than the size of Texas.

The impact of such gradual, long-term damage seems minor in comparison to single events that have redefined man’s ability to scar the planet.

Prince William Sound, Alaska, 1989: The oil spill caused by an Exxon oil tanker, the Valdez, off the coast of Alaska was one of the watershed moments for the environmentalist cause. News footage of live and dead birds covered in dark brown crude oil shocked America. The Valdez leaked nearly 11 million gallons of oil, about a fifth of the ship’s petroleum payload. Over 1,100 miles of coastline were affected by a slick that spread over 11,000 square miles. The cleanup lasted for years, requiring thousands of workers. 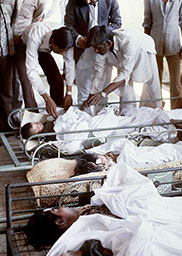 Bedi/AFP/Getty Images
Catastrophic accident: Victims of the Bhopal tragedy receive first aid from doctors at a hospital. The gas leak from the Union Carbide factory killed 20,000 people and injured around 30,000 (Dec. 4, 1984).

Chernobyl, Ukraine, 1986: When a reactor at the Chernobyl nuclear plant exploded, it sent xenon, iodine, cesium and other radioactive materials into the air and eventually the groundwater in Ukraine as well as Russia and Belarus. Thirty workers died in the immediate aftermath of the accident, but its effects still linger today. Thyroid cancer among children in the region is common, and a high percentage of babies are born with partial or missing limbs.

Bhopal, India, 1984: In history’s worst environmental disaster, a chemical plant leaked massive amounts of methyl isocyanate into the air, killing 20,000 in the short term and leaving behind long-term health effects for local Indians.

“Blind, lame, limbs twisted or missing, deafmute, brain-damaged, with hare-lips, cleft palates, webbed fingers, cerebral palsy, tumors where should be eyes, these are Bhopal’s children. The living children. The still-born often cannot be recognized as human” (The Bhopal Medical Appeal).

One Bhopal resident recalled the scene as noxious fumes filled the air.

“‘It felt like somebody had filled our bodies up with red chilies, our eyes tears coming out, noses were watering, we had froth in our mouths. The coughing was so bad that people were writhing in pain. Some people just got up and ran in whatever they were wearing or even if they were wearing nothing at all. Somebody was running this way and somebody was running that way, some people were just running in their underclothes. People were only concerned as to how they would save their lives so they just ran. 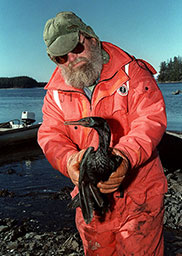 “‘Those who fell were not picked up by anybody, they just kept falling, and were trampled on by other people. People climbed and scrambled over each other to save their lives—even cows were running and trying to save their lives and crushing people as they ran.’ In those apocalyptic moments no one knew what was happening. People simply started dying in the most hideous ways…The force of the human torrent wrenched children’s hands from their parents’ grasp. Families were whirled apart” (ibid.).

“To dress it and to keep it”

According to the Bible, the Creator of man intended that he exercise stewardship over the planet He had renewed. “And the Lord God took the man, and put him into the garden of Eden to dress it and to keep it” (Gen. 2:15).

Has humanity “kept” the earth?

The case can be made that prosperous nations such as the United States, Canada and some European states have made progress.

London eventually passed legislation to limit air pollution after a number of mass fatalities. The Environmental Protection Agency was established by the United States government in 1970 to clean up existing problems and regulate industry to prevent excessive pollution. University researchers have been able to revive some dead lakes in northern New York by adding “antacid” solutions.

Yet governments have searched in vain for the proper balance between necessary use of the Earth and abuse of its resources, generally falling into one of the two extreme positions of nature worship or rapacious greed.

Meanwhile, debate among citizens rages: “We are not doing enough to save the Earth!”—“No! Too much money is being spent on environmental causes!”—“But we are ruining the planet!”—“Taxpayers’ money should not be spent on things like crosswalks for salamanders!”

Hope for the Future

Beyond the politics of the issue is the ultimate question. Is human extinction in our future? Will Hollywood’s fantasies become reality?

Looking at present conditions too closely, for too long, can provoke gloom. There is no doubt that humanity does possess destructive—ultimately self-destructive—tendencies. Its capacity for creativity and progress comes with a strong negative undertow.

With even the most well-meaning plans, shortsighted thinking can lead to unforeseen consequences, whether of harvesting trees or building a combustion engine to power an automobile.

The heart of the problem is that mankind, as a whole, does not truly acknowledge an authority greater than itself. While many profess to follow a “Higher Power,” the vast majority will not change their lives in order to submit to that Power. As a result, humanity has no guidance, and is forced to learn many painful lessons the hard way—by trial and error.

For those who believe and understand the Bible—assumed by many, but proven by few, to be the Word of God—there is hope for the future. Despite stockpiles of weapons and the threat of “mutually assured destruction,” God will not allow mankind to be erased! But prophecy makes plain that the worst of times are ahead of us, followed by the very best of times.

If you would like to learn about an alternative to the hard path of trial and error—found in the Bible—read our booklet Bible Authority...Can It Be Proven?