This website requires the use of Javascript to function correctly. Performance and usage will suffer if it remains disabled.
How to Enable Javascript
Europe’s Greek Crisis – A Sign of Things to Come? 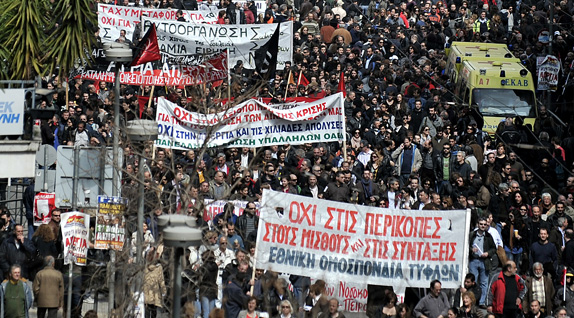 As one of the most traded currencies, the euro is a reserve currency second only to the U.S. dollar, with more banknotes in circulation than any other.

Yet in recent years the European Union and much of the rest of the world have faced financial turmoil. For the Continent, the Great Recession is reported to be the biggest economic contraction since the 1930s.

European Council President Herman Van Rompuy had strong words for the EU, warning in January 2010 that Europe’s economic “long-term outlook is not bright.”

The Irish Times reported that “…Mr Van Rompuy said the union will have to double its average growth rate to 2 per cent ‘if we want to keep up with the rest of the world, and with our self-image’...Addressing a meeting of Germany’s Christian Social Union party, he also said a new 10-year economic strategy for the EU will have to include measures that would bind governments to their policy commitments” (emphasis added).

With stronger member-nations demanding fiscal responsibility for poor-performing countries at the risk of expulsion, what stands in the way of Europe keeping up with the rest of the world as an economic powerhouse?

Greece on the Brink

More than 20,000 demonstrators walked off their jobs for a one-day general strike in protest of a plan to save some $6.7 billion through wage freezes or cuts for government workers, increased taxes, raising the retirement age from 61 to 63 by 2015, and higher gasoline prices.

The New York Times reported that the Greek government was “under intense pressure to plug a budget deficit estimated at 12.7 percent of gross domestic product and to avert the first national default among the 16 countries that use the euro.”

The latest EU member to announce a major financial crisis, Greece needed about $73 billion to combat its bloated budget deficit and had asked for financial assistance from other countries. Due to concerns that the nation may default, ratings agency Standard & Poor’s downgraded its debt to “junk” level, making it a much riskier place to invest. This, in turn, raised fears that it would not meet conditions required to access the funds it needs to make looming debt repayments should the bailout loans be granted.

The news lowered the value of the euro and brought into question the sustainability of a united European currency. “Most euro zone countries oppose going to the International Monetary Fund for reasons of political prestige and to avoid any admission that EU budget discipline rules have failed,” Reuters reported. The EU prohibits countries such as Germany and France from putting together a strictly financial bailout package.

“The uncertainty has recently buffeted the euro and the problems have extended to Spain and Portugal, which are also struggling with their deficits. The possibility of Greece or one of the other stricken countries being unable to pay its debts—and either needing an EU bailout or having to abandon the euro—has been called the biggest threat yet to the single currency” (ibid.).

“In the future, we need an entry in the [Lisbon] Treaty that would make it possible, as a last resort, to exclude a country from the eurozone if the conditions are not fulfilled again and again over the long term,” the German chancellor said. “Otherwise co-operation is impossible” (EUobserver).

BBC News reported, “For the German chancellor…what is important is defending the stability of the currency, not solidarity, not a belief that the eurozone would inevitably expand. It might not. It might even contract. The German leader wants a treaty change to allow for expulsions.”

The EU’s Stability and Growth Pact sets debt and deficit limits at 3 percent of gross domestic product. Yet some European nations are well beyond this requirement. For example, Greece’s 2010 financial deficit was as high as 15 percent—five times higher than EU regulations permit.

Countries routinely miss the fiscal goals set out by the Stability and Growth Pact, an agreement the European Union adopted in 1997. According to the European Commission, however, of 14 EU member-states assessed, only four—Bulgaria, Estonia, Sweden and Finland—kept their general government deficits below 3 percent of GDP in 2009.

“Ms. Merkel is demanding new measures to beef up the euro-zone’s rules for disciplining a wayward member, a move that some see as a step toward tighter economic integration in the group,” The Wall Street Journal reported. “Others read the push as a signal that Germany is merely seeking greater control over other governments’ fiscal policy, while refusing to deepen its own commitment to the common European cause.”

Another factor to consider in this crisis is that the public’s opinion matters, especially in countries such as Germany and Greece. As mentioned, protests, some violent, occurred when the Greek government tried to correct its fiscal instability. On the other hand, many hundreds of miles away, a poll revealed that a majority of Germans did not support bailing out the Mediterranean country.

With Greece and other nations still on the brink of financial insolvency, what will boil over first—the anger of the residents of the country at risk or the resentment from citizens of lender nations?

If Greece had defaulted, it would have been a great blow to the euro. The powers-that-be understood this and produced a rescue package in late March 2010 intended to avoid the imminent collapse.

Early in the discussion, there was talk that the International Monetary Fund (IMF) should step in and assist Greece. But many disliked this solution because such a bailout was seen to be a sign of weakness, and highlighted Europe’s inability to solve its own problems.

Ultimately, the IMF was included in the final proposal. Agence France-Presse reported, “The deal, inked by heavyweights Germany and France, ended weeks of EU bickering and opened a new chapter in eurozone history—allowing the Washington-based International Monetary Fund, to have a say in euro affairs for the first time in the euro’s 11-year existence.” 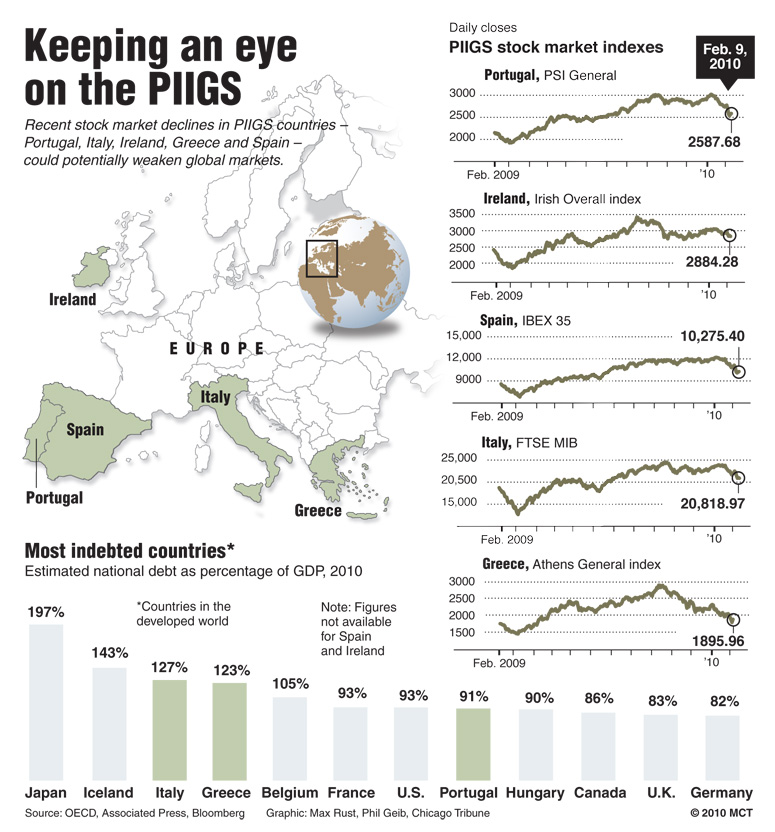 Paris-based BNP Paribas, one of the largest banking groups in the world, told AFP, “The agreement involving the IMF may be good news for Greece in the near term but bad news for EMU (economic and monetary union) in the medium term…The inability of European authorities to find a European solution to a problem that concerns 2.5 percent of EMU GDP (gross domestic product) can weaken the euro area.”

Surely, some European power players are not pleased that the EU looked for outside assistance. Will the Continent learn from this, taking a stronger approach the next time a nation nears financial collapse?

Not Just a Greek Problem

Greece is not the only European country that faces fiscal trouble. With the EU confronting its biggest recession since the 1930s, economies across Europe are shrinking: Spain is down 3.6 percent in 2009, Portugal 2.7 percent and Ireland 7.5 percent—not to mention other nations’ shaky growth outlooks for 2010 and future years.

Spain recently lost its AAA rating, and unemployment in the nation is at 19 percent, with 4 million people out of work. Although the nation recently enjoyed a huge economic boom, financial analysts now claim Spain may experience a “lost decade.”

In past fiscal crises, a country could temporarily devalue its currency to bring increased foreign capital. With the euro, however, other countries and economies are at stake. In such situations, countries need growth. But it is near impossible for a nation to provide stimulus to another country when it is trying to reduce spending!

Competition is another factor. Europe has to compete with Asia, which has lower labor costs and countries that rely less on each other’s mutual economic success.

Since the eurozone is locked into one market, where different types of workers compete with each other, it can be difficult for “efficient” countries—such as Germany—as lower-performing member-states can pull down the union’s overall competitive ability.

“‘For countries, which in the past have lived off entitlements and neglected their competitiveness, to point their finger at others is politically...understandable, but still unfair,’ he told the Frankfurter Allgemeine daily.”

In brief, Germans or other EU citizens, at some point may feel it is no longer in their best interest to help those who have “lived off entitlements and neglected their competitiveness”—especially when that sense of entitlement and lack of competition could bring down others in the EU.

A paper produced by Stratfor, a resource of geopolitical intelligence, brought the following chilling comments regarding Germany’s response to the Greek situation: “What made us look at this in a new light was an interview with German Finance Minister Wolfgang Schauble on March 13 in which he essentially said that if Greece, or any other eurozone member, could not right their finances, they should be ejected from the eurozone…Germany now appears prepared not just to contemplate, but to publicly contemplate, the re-engineering of Europe for its own interests. It may not do it, or it may not do it now, but it has now been said, and that will change Germany’s relationship to Europe” (emphasis added).

“The paradigm that created the European Union—that Germany would be harnessed and contained—is shifting. Germany now has not only found its voice, it is beginning to express, and hold to, its own national interest. A political consensus has emerged in Germany against bailing out Greece. Moreover, a political consensus has emerged in Germany that the rules of the eurozone are Germany’s to refashion. As the European Union’s anchor member, Germany has a very good point. But this was not the ‘union’ the rest of Europe signed up for—it is the Mitteleuropa that the rest of Europe will remember well” (ibid.).

Shifts are occurring in Europe! This latest crisis has revealed that national interests come first. The Greek crisis also revealed that other countries will only tolerate financial irresponsibility for so long.

But what about the next crisis? What will happen if things get worse?

World trends coupled with Bible prophecy reveal that Europe has a fascinating and dramatic future. The Continent will keep up with the rest of the world, allaying Mr. Van Rompuy’s concern that Europe’s “long-term outlook is not bright.”

The profile of the united states of Europe will certainly shift, with some countries coming and going. What is certain is that Europe will continue to grow in world prominence. 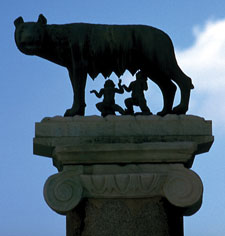