This website requires the use of Javascript to function correctly. Performance and usage will suffer if it remains disabled.
How to Enable Javascript
In the Shadow of Iceland’s Volcano – Will We Be Ready Next Time?

In the Shadow of Iceland’s Volcano

Will We Be Ready Next Time?

With planes back in the air after the volcanic-ash-cloud flight ban, many in Europe are left awed by the mysterious power of nature. But can scientists discover a way to predict and prevent the next devastating eruption? 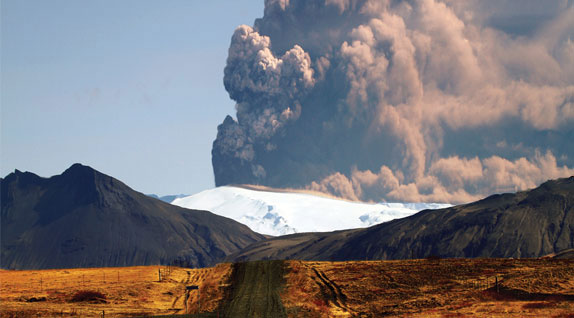 The relatively minor eruption of Iceland’s 200-year-dormant Eyjafjallajokull volcano was all it took to bring the entire European continent and various parts of the world to a standstill.

The volcano, which pushed house-sized ice chunks into fields, flooded farmland, covered homes with ash, and turned the sky pitch black during daylight hours, generated an ash cloud that covered most of Europe. 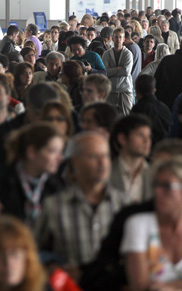 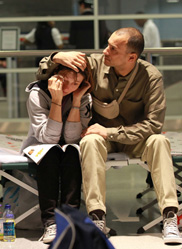 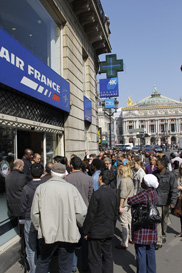 Mario Tama/Getty Images
Passengers line up outside the Air France ticket sales office in Paris after their flights were canceled (April 19, 2010).

Given the threat of ash particles clogging plane engines, more than 20 European governments declared their countries no-fly zones for almost six days—double the length of the post-September 11 closures—causing unprecedented aviation disruptions for more than 1 million passengers.

“We are so used to this idea of knowing exactly what’s going on and being in control of stuff,” one stranded passenger told The Telegraph. “We are used to the idea of getting on a plane and going anywhere [we] want at the drop of a hat.”

Although annoyed, many travelers tried to make the best of the situation, passing the extra hours catching up on work or reading.

But when scientists speculated the eruption could last for up to two years, people grew anxious to return home.

As days passed and economic losses added up to more than $3 billion, Europe’s “minor volcano” began to turn into a major problem. The continent braced for the worst.

Yet six surreal days later, the winds changed, the clouds cleared, and airports sputtered back to life, halls once again filling with more than a million homebound vacationers. It appeared that everything was back to business as usual.

“It’s normal for eruptions to start energetically and then to become quieter with time, at which point lava flows are effused,” Open University Professor Dr. Dave McGarvie told The Daily Mail. “But—and it’s a big but—eruptions like this can have a number of cycles, and so we could see another cycle start with a renewal of explosive activity at any time.”

In an era where the global economy depends on aircraft crisscrossing the planet to meet the demands of an ever-growing, interconnected society, the situation demonstrates humanity’s inability to fight the tremendous power of nature.

For almost a week, natural forces seemed to hold European skies hostage. The continent was forced to admit it was defenseless against the volcano.

Beleaguered airlines, facing $200-million-daily losses, struggled to accommodate tired passengers, who complained they could not afford another night’s hotel stay after their week-long vacations left them broke.

Denmark’s prime minister, stranded in New York City, was forced to run his nation via email on a wireless device, while other leaders, including the German Prime Minister and Commander of the United States and NATO forces in Afghanistan, took day-long car rides to attend briefings. Even fighter jets were unable to take to the skies, after a senior diplomat reported that several NATO F-16s sustained engine damage from the ash—leaving Europe indefensible militarily as there exist “no available systems for airborne detection of volcanic ash, and aircraft weather radar cannot detect volcanic ash because the particle size is too small,” according to NASA.

As the better part of Europe was virtually dragged into the pre-Wright-brothers days of ships, trains and automobiles, British naval vessels, cruise liners and ferries trekked across the English Channel to repatriate thousands of stranded Britons from northern Spain.

Travel delays not only affected those in Europe, but other parts of the world suffered logistical and economic consequences.

Up to 1,000 travelers—some of which had not bathed for five days—used 36 showers on trailers trucked into New York City’s airport (renamed “Camp Kennedy”) and tried to get rest on cots set up in front of duty-free stores and food courts. City officials said the erupting volcano could cost the city $250 million in tourism revenue given that approximately 12,000 European travelers who spend an estimated $3 million a day—half of the city’s tourist revenue—were unable to fly.

Exotic fish rotted in their crates as fishermen were unable to export to international consumers. The price of oil dropped due to decreased demand for jet fuel. FedEx and UPS, with hubs in Germany and France, all but stopped airmail operations.

The Globe and Mail reported that the situation caused international turmoil.

“In Britain, the biggest supermarket chains said some fresh foods will go missing from shelves as imports from Africa and Asia can’t make it in. European flower shops everywhere may soon have scant offerings because hundreds of tonnes of Kenyan flowers destined for the export market lie rotting. And logistics companies warned that the freight logjam could hurt manufacturers that rely on steady air cargo deliveries.” 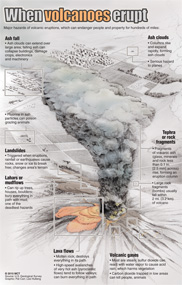 “Even airlines based far from the ash face a financial knock-on effect,” a CNN report stated. “Thai Airways, based in Bangkok, estimates the cloud is costing the airline $3 million a day and has stranded 6,000 of its passengers.” United Arab Emirates reported similar losses, after canceling more than 30 flights and booking about 3,500 hotel rooms for stranded passengers.

Airline executives estimate that without government intervention, dozens of airlines could be bankrupt by month’s end, putting further financial pressure on already-fragile economies attempting to eke back from the Great Recession’s effects.

More than $3 billion lost worldwide—all because of a volcano that even the most-advanced technology is powerless to stop.

Europe, and the world, can only adapt to the newly realized volcanic threat, with limited options.

But placing more sensors on a mountain and having a thorough evacuation plan will not save residents. Nothing can assuage a volcanic eruption or its subsequent effects.

Even aviation experts admit that no technology exists to even accurately detect the ash, let alone successfully fly through it. Is this really a problem that humanity coupled with modern science could ever hope to solve?

Consider. Man can place 400 travelers in an airplane and hurtle them 500 miles per hour across the globe. He can send space probes to Saturn and observe the massive hexagonal storm at its north pole. He can create supercomputers able to process 100 million calculations per second.

Yet many things remain a near mystery. Scientists still do not understand lightning. Any honest television documentary on the subject will always issue the disclaimer, “While the exact reason for the production of lightning is unknown, one theory is...”

The same is true of volcanic eruptions or earthquakes. Try as they might, geologists—even with technological gadgetry of increasing sophistication—simply cannot understand the inner workings of the earth’s seismic activity.

Science does reveal that Iceland’s volcano can blow at any time and cover Europe again. Worse, Katla, Eyjafjallajokull’s sister mountain—a significantly more powerful volcano—almost always erupts in conjunction with its neighbor. But no one is able to make any pinpoint predictions for the next eruption.

It seems the best anyone can do is brace for the worst.

What About Next Time?

Look back on the chaos of those six days. A little bit of volcanic ash halted a powerful continent, unraveled society’s interdependent web of globalization, and robbed the already-taxed international economy of billions of dollars.

The result of something modern man could not control.

Throughout history, civilizations deified what they did not understand. In Greece, Zeus was thought to throw lightning bolts. Aztec tribes believed human sacrifice could feed and appease their many agricultural gods.

Today is not much different. Governments, businesses and citizens must rely solely on science to aid them as the volcano threat looms. Yet scientists have no way of knowing what will happen in the future!

Humanity fails to comprehend there is a greater power behind Earth’s weather patterns and tectonic activity, as demonstrated throughout history and recorded in the Bible—God’s Word.

While often dismissed as ancient Hebrew literature, this Text reveals what science fails to grasp—the crucial role, both past and future, of earthquakes and the volcanic eruptions often triggered by them.

The Bible shows that God has consistently used seismic activity to show His presence, His deliverance, His wrath and His power.

Yet God will also use volcanoes and earthquakes in the future to announce coming events.

In Matthew 24, Jesus told His disciples of the signs that would precede the end of the age. In verse 7, He stated, “and there shall be…earthquakes, in diverse places.”

This means earthquakes will take place in various places—scattered throughout the world—and increase in frequency as humanity’s attempts to rule itself reach a climax.

Had earthquakes been as prolific throughout history as they are today, then they would not indicate that the end of the age was near. Yet many scientists acknowledge they are much more common now than at any other time in history—and have the ability to impact more lives.

“Relative to the 20-year period from the mid-1970s to the mid-1990s, the Earth has been more active over the past 15 or so years,” Stephen S. Gao, Missouri University of Science and Technology geophysicist, told MSNBC. “We still do not know the reason for this yet.”

Another proof this age is drawing to a close was evidenced once planes took to the sky after the flight ban was lifted. The book of Daniel states in “the time of the end” that “many shall run to and fro, and knowledge shall be increased” (Dan. 12:4).

Since the dawn of air travel, man has increasingly been able to “run to and fro.” Knowledge in every field of study is rapidly increasing. Ask anyone who grew up during the Great Depression and they will tell you the world is a drastically different place!

Despite incredible advancement, man is unable to reverse the outcome of any natural event.

Without the revealed knowledge or intervention from a Higher Power, the forces of nature, such as the volcano that held Europe and the rest of the world hostage, will continue to rule over him.

The recent Iceland volcano event and its crippling effects were just a foretaste of what is to come. Much larger volcanoes and earthquakes are soon to shake the earth!