This website requires the use of Javascript to function correctly. Performance and usage will suffer if it remains disabled.
How to Enable Javascript
Shopping for a Religion

Shopping for a Religion

Why do so many hop from church to church? 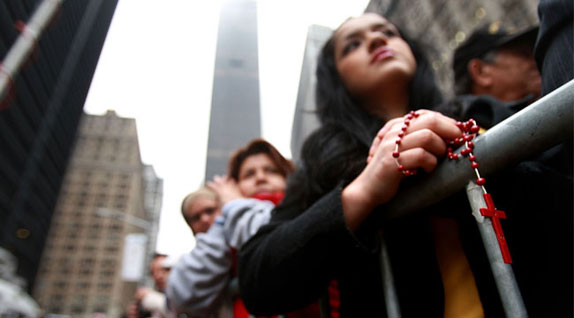 Spencer Platt/Getty Images
Lining up for prayer: Onlookers in New York City await the arrival of Pope Benedict XVI for a prayer service with family members of some who were killed on 9/11 at Ground Zero (April 20, 2008).

Driving on Interstate 71 in southern Ohio, south of Columbus, a motorist passes a billboard sign advertising a nearby church. It reads, “A Church for People Who Don’t Like Church.”

Quite a telling statement! It demonstrates that many churchgoers are dissatisfied with the status quo of “churchianity” (making church a religion rather than obeying God as a way of life). For them, life’s most important questions go unanswered.

Unsettled and unfulfilled, the restless parishioner begins to question the teachings and practices of his church.

Are you among the growing numbers investigating—questioning—what you have been told?

Almost half (44 percent) of American adults surveyed by the Pew Research Center’s Forum on Religion & Public Life have changed “faiths” (the many differing religious organizations) from what they were taught as children. The study showed that most switched before age 24, many more than once.

Is it because there is not enough entertainment at church? Is it that the message is not right, or the congregation does not “show enough love”? Maybe the church is too old-fashioned or too contemporary. Or it is simple dissatisfaction, and now there is an urge to seek something better—more appealing—something that feels right? I have not found the right “one” for me yet, others think, so I must keep searching.

This is why over 1 million people each day Google the word “church” looking for information. Another over 1.5 million type the word “Christianity” into search engines each day, no doubt for the same reason.

The following scenarios play out daily across America in the lives of millions looking for something they cannot find from their church: Mary stopped attending because of the bad attitudes of people in the congregation. John left through the “back door” of his church because he was tired of the same old “healing and grace” sermon week after week. The Jones family dropped out because of the pastor’s hypocrisy: teaching from the Bible, but living diametrically opposite from what it says to do.

Most children grew up following their parents’ religious beliefs. Now, having reached adulthood, they no longer share these same views. Instead, they search for something else, something that agrees with their own thinking.

What is the primary motivation for wanting to change religions?

Switching From Church to Church

Change is part of everyday life. You change your clothes for work, the lane in which you drive your vehicle, your baby’s diapers—you even change your work schedule for unexpected situations that suddenly crop up. People in the West take such changes for granted, a mindset that has carried over to religion.

However, should your church affiliation change when it no longer fits your lifestyle, such as getting married to a person of another faith or relocating to another community?

With tens of thousands of different “Christian” churches to pick from in the U.S., it should not be surprising that there are at least this many reasons people want to change from one religion to another.

“According to the 2007 Landscape Survey, 16% of American adults say they are currently unaffiliated with any particular religion, compared with only 7% who were raised unaffiliated,” revealed the Pew Forum on Religion & Public Life (“Faith in Flux: Changes in Religious Affiliation in the U.S.”).

Broad and Easy—or Narrow and Straight?

This world’s “Christianity” can only offer a broad, easy, and often “come as you are” way. The Bible describes that way as having a wide entrance leading to destruction. The true way is straight and narrow and only a few are finding it (Matt. 7:13-14).

There are thousands of supposed “Christian” churches. There is a flavor of “Christianity” for all the tastes a person might have. Millions feel they have heard about and know the true Jesus Christ. By just “believing in” and “professing” Christ, all consider themselves Christian.

Yet in real Christianity, being a true Christian goes far beyond simple belief. It is much more than just knowing about Jesus, or believing that He existed. It is not just believing in a set of doctrines. It is actually living daily the Bible’s Truth. It is a way of life founded on the Ten Commandments and all the laws of God.

Most of the world looks at God’s Law as bondage. However, the love that God has for us is shown in His Commandments, and we receive blessings for obeying them (I John 5:3). God’s Law is a Law of liberty; when we keep it, it frees us from the bondage of the hurtful and destructive ways of this world (Jms. 2:8, 12).

A person who is really living the Christian way of life shows their love for God by keeping His laws—all of them (John 14:15).

When a person lives this way of life, he stands out as being different. God does not want His people to be conformed to the ways of this world (Rom. 12:2), but wants them to be transformed by the renewing of their minds by His Word. With His Spirit in them, it is possible for them to change.

Still, true Christians are not perfect, but are striving to be. Perfect people are not the criteria for identifying the true Church. Its teachings are.

People surveyed said some of the reasons they became unaffiliated were because “they think of religious people as hypocritical, judgmental or insincere…religious organizations focus too much on rules and not enough on spirituality, or that religious leaders are too focused on money and power rather than truth and spirituality. Another reason cited by many people who are now unaffiliated is the belief that many religions are partly true but no single religion is completely true” (ibid.).

Another survey of the same topic, given a year later, revealed that 74 percent of those who chose to join a particular church did so because they were attracted to the worship services; 51 percent wanted spiritual fulfillment that was lacking in their life; and 55 percent felt they were being called by God. About 40 percent of this latter group said religion was somewhat important in their lives.

With a 68 percent retention rate of childhood members, the Catholic Church has the greatest net loss compared to other major groups. Those who leave outnumber those who join, almost four to one. About half leave to become evangelical Protestants or unaffiliated; 62 percent of former Catholics say they left because they stopped believing in Catholic teachings; and 55 percent felt uncomfortable with how the Bible was taught.

One of the most common answers given as to why nearly 71 percent of former Catholics and Protestants abandoned their childhood religion: They slowly drifted away.

The survey found “majorities of those who have changed affiliations within Protestantism say they left their childhood faith in part because they found another religion that is preferable (58%) or because they were spiritually unfulfilled in their former faith (51%)” (ibid.).

People’s dissatisfaction with churches lies in the “supermarket mentality.” Churches with the “open door” policy of “come one, come all, no commitment necessary,” follow the same consumer outlook.

John Moore/Getty Images
A cry for help: Church-goers in Denver, Colo., pray for members of their congregation who are affected by the recession (May 31, 2009).

Clients can go to the store of their choice, walk in, grab a shopping cart, and select from among the numerous goods for sale what they want to take home. The same thing happens in most churches today, which allow anyone to come in and “check things out,” no matter their beliefs.

Generally, most stores advertise their goods so that the consumer knows in advance what to expect. Yet with most churches, the prospective “buyer” is in the dark as to what the church teaches (its “goods”) until he enters and stays awhile. It may or may not be the kind of “store” for which he is looking. After sampling the merchandise only to find it is not what he wants, the unsatisfied customer walks out the door.

A pattern has developed in those who consider themselves religious, having easily found a way to hop around from church to church, never able to trust the organization or the congregation—and, most important, the doctrines taught.

Traditions fill the world of Christendom. Billions believe the view that “If you give your heart to the Lord, you’re a part of the collective body of believers all over the world,” no matter with whom you are affiliated or what you believe. Such thinking ties to the belief that “there are many paths to salvation.”

This is a false teaching devised by men who reject God’s Commandments so they may keep their own traditions (Matt. 15:9; Mark 7:9). Nowhere is this taught in your Bible!

The Church Jesus Christ built—which is His Body (Eph. 4:15-16) and Temple (Eph. 2:19-21)—is not composed of many disagreeing groups, fellowships, denominations, organizations or “communities of believers.”

In the book of Matthew, Jesus stated, “I will build My Church” (16:18). This speaks of a single Church, not many churches. He continued, “And the gates of hell shall not prevail against it.” God promises that His Church will never be destroyed.

The Church of God is a type of Christ’s own Body with many members (I Cor. 12:12-14). As its Head (Col. 1:18; Eph. 1:22-23), Jesus governs, directs, builds and adds to His Body. It is unified in both doctrinal truth and love, and demonstrates that the entire Church (“whole body” and “every part”) must walk together in complete doctrinal agreement under Jesus Christ’s authority. And He works through His true ministers to keep the Church from drifting into “every wind of doctrine” (Eph. 4:11-16).

Is it possible to find this one true Church? How can you identify it?

It is unified through God’s Word—all members of Christ’s Body believe the same thing, enabling them to walk together in spiritual unity and doctrine.

It obeys Christ’s instruction to “teach all nations…to observe all things whatsoever I have commanded you” (Matt. 28:19-20), and preaches the good news of the soon-coming kingdom of God: “And this gospel of the kingdom shall be preached in all the world for a witness unto all nations; and then shall the end come” (Matt. 24:14). In this end-time Work, this Church publishes to all peoples and nations “a magazine restoring plain understanding”—The Real Truth.

You have come in contact with the one true Church. It can be thoroughly “checked out” by studying our literature with an open Bible and proving all things for yourself. To learn more about this unified Body, read David C. Pack’s book Where Is the True Church? – and Its Incredible History! 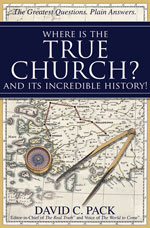 Where Is the True Church? – and Its Incredible History!