This website requires the use of Javascript to function correctly. Performance and usage will suffer if it remains disabled.
How to Enable Javascript
Is This Reality? – Blurring the Lines Between Life and Television

Blurring the Lines Between Life and Television 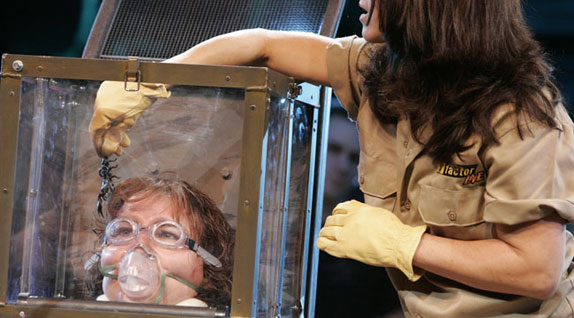 Robyn Beck/AFP/Getty Images
Extreme: An animal handler puts live scorpions on the head of a participant during a theme park competition of the reality television show Fear Factor Live (June 16, 2005).

With the arrival of The Real World in 1992, the template for a new kind of television program took shape. The show featured seven twenty-something “regular people”—that is, non-actors—who moved from various parts of the United States to a New York City apartment. With cameras running constantly, both inside and at locations around the city, the show documented their lives for one TV season.

Thus began the rise of a whole new kind of programming.

The reality genre’s breakout moment in the U.S. was the success of the program Survivor. The show features a group “stranded” on an island, which periodically convenes to vote one of the contestants “off the island”—therefore, off the show and out of the running for the $1 million cash prize.

This format has also taken off in Western Europe, particularly Britain. At the forefront is the long-running Big Brother series, in which “housemates” form alliances and rivalries, and nominate two housemates per week to be evicted, with one or both chosen by the viewing public to be removed through a phone/text message poll.

These shows have multiplied and expanded in recent years. An entire cable channel is now dedicated solely to reality television. At the same time, their content has been sliding ever further into the gutter of amorality and empty-headed behavior.

How about When Chefs Attack? From the show’s website promo: “A mind-boggling, stomach-turning collection of surveillance footage taped in restaurants the world over. A diner’s worst fears are confirmed as the footage reveals grotesque food tampering by miscreant chefs, waiters and kitchen help.”

Some of the programs classified as reality television do showcase genuine talent, useful skills, interesting occupations, or other information from which viewers can benefit. But much of what now passes for entertainment in this realm forms a sad commentary on the state of America and Europe.

The shock value of appalling conduct is a mainstay of reality TV. Backstabbing and betrayal—scheming to get others eliminated as contestants—cheating boyfriends and girlfriends—all-night drinking binges—drunken brawls—random, indiscriminate sexual encounters—women spitting in each other’s faces and pulling one another’s hair in catfights over a romantic interest—the list goes on. Raw, ugly and often violent human nature celebrated in prime time.

Several reality TV “stars” first found notoriety through homemade pornographic videos that were “leaked” (perhaps intentionally) and then distributed for sale, with the stars reaping a portion of sales revenue. On the subgenre of “dating” shows, many of the women vying for the attention of a central male figure are employed as strippers. As of this writing, more than one former reality show personality has been named a suspect in high-profile crime investigations.

As these shows drag standards of behavior toward the lowest common denominator, it begs the age-old question: Does art imitate life, or does life imitate art?

The most tragic potential effect is that young viewers who see the type of behavior routinely displayed on reality shows could come to see it as acceptable—even normal. (MTV, one of the main purveyors of reality television, reportedly targets the 12- to 17-year-old age demographic.)

Are we ready for a generation raised on A Shot at Love with Tila Tequila and Date My Mom to take positions of responsibility in society?

Plumbing the Depths of Shallowness

While much of network and cable television’s output is at best a waste of valuable time, reality TV can be particularly shallow in content—even mind-numbingly inane! Hour after hour is spent languishing in vacant stares, meaningless conversations, thoughtless actions, and the recurring theme of men and women professing their “love” for a person they hardly know.

For example, producers built an entire show around a California tanning salon. A sample of some of the “momentous” events documented: “Molly is pushed to tears when Holly calls her mean names in front of the whole staff. Is their friendship over for good?…See what happens when the Olly girls try to eat as many donut holes as possible!...Ania and Keely cater to an unusual request when a guy wants his girl to match his skin tone to please his parents.”

Other shows have been based on an aging rap star’s quest for a girlfriend, a drug detox program for celebrities, the life of an often incoherent former model (who later died of a drug overdose), and a competitive beauty pageant in which a panel of male judges assign numeric scores to various body parts of swimsuit-clad women.

Another implied message is projected by many reality shows: “People will do anything for money.” The series Fear Factor took this to the extreme, with contestants engaging in repulsive “challenges”—such as eating cockroaches—for a prize. Another series gets right to the point in its very title: I Love Money.

Not all of the blame for the content of these shows should be placed on the men and women in front of the camera. The producers share a large part of this, as they devise the scenarios and push on-air personalities toward desired behaviors. They do this in pursuit of ratings, which in turn lead to higher advertising revenue.

A recent article documented the lengths to which producers will go to turn a human life into a spectacle for public consumption: “Long workdays and communication blackouts are largely the rule for contestants on reality shows, a highly lucrative genre that has evolved arguably into Hollywood’s sweatshop. Unscripted series now account for more than one-quarter of all primetime broadcast programming—and essentially the entire day on cable channels like Discovery, Bravo and A&E. The most popular reality series, ‘American Idol,’ has commanded advertising rates as high as $1 million for a 30-second spot.

“But with no union representation, participants on reality series are not covered by Hollywood workplace rules governing meal breaks, minimum time off between shoots or even minimum wages. Most of them, in fact, receive little to no pay for their work.

“It can make for a miserable experience but compelling entertainment, creating a sort of televised psychological experiment that keeps contestants off-balance and vulnerable.

“Most reality series have contestants sign nondisclosure agreements that include million-dollar penalties if they reveal what happened on set. But interviews with two dozen former contestants—most of whose agreements expired after three years—from half a dozen reality series suggest that the programs routinely use isolation, sleeplessness and alcohol to encourage wild behavior.

“During the 2006 season of the popular ABC dating show ‘The Bachelor,’ the contestants waited in vans for several hours while the crew set up for a 12-hour ‘arrival’ party where, two contestants said, there was little food but bottomless glasses of wine. When producers judged the proceedings too boring, they sent out a production assistant with a tray of shots.

“‘If you combine no sleep with alcohol and no food, emotions are going to run high and people are going to be acting crazy,’ said…a contestant that year” (The New York Times).

It was predicted in the 1960s that in the future everyone would be world-famous for 15 minutes. Many now live their lives as if this is their goal.

A Psychology Today study revealed this to be true: “The attitude that best separated the regular viewers of reality television from everyone else is the desire for status. Fans of the shows are much more likely to agree with statements such as, ‘Prestige is important to me’ and ‘I am impressed with designer clothes’ than are other people. We have studied similar phenomena before and found that the desire for status is just a means to get attention. And more attention increases one’s sense of importance: We think we are important if others pay attention to us and unimportant if ignored.

“Reality TV allows Americans to fantasize about gaining status through automatic fame. Ordinary people can watch the shows, see people like themselves and imagine that they too could become celebrities by being on television. It does not matter as much that the contestants often are shown in an unfavorable light; the fact that millions of Americans are paying attention means that the contestants are important.”

These shows have a number of negative effects on viewers, both subtle and overt. They promote dissatisfaction with life in the average viewer, who sees someone who may be perceived as “just like them” achieving fame (and often fortune). Any human being with access to television or the Internet can now covet another person’s whole life—even if they have never met (see Jeremiah 6:13; 8:10).

Such shows also promote a passive and even voyeuristic mindset. Most of them do not motivate or inspire action—rather, they make it easy to live vicariously through others, expecting to be constantly entertained instead of informed or edified. And they play into the natural human tendency to criticize others in order to elevate the self. Viewers can find themselves watching outrageous behavior and thinking, “I would never do that!” while being perfectly content to watch “that” happening—over and over again.

Ironically, the more time and energy a viewer invests in reality television, the further he gets from actual reality—the challenges, joys, responsibilities, stresses and opportunities facing men and women today. These shows drain away precious, finite hours from one’s schedule, with little to show for it afterward.

Finally, reality programs prevent viewers from learning what is happening day-to-day on planet Earth. With so many parts of the world aflame with war, economic upheaval, civil unrest, disease outbreaks and other history-making events, do we really have time for America’s Trashiest Weddings?

Have you ever asked yourself, “Is there more to life than this? Is this all there is?” The good news is that the answer is yes—there is more than just this temporary physical existence! But this spiritual void can never be filled through a life of idly waiting for the next guilty pleasure to be delivered through an electronic screen.

There is a reason you were born—a transcendent potential that, for most, is obscured by the pursuit of physical thrills and immersion in passive entertainment.

If you would like to learn about the many ways in which the reality of your life can be far more exciting than any television show, read David C. Pack’s book The Awesome Potential of Man, as well as his booklet The Laws to Success. 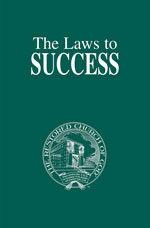 The Laws to Success