This website requires the use of Javascript to function correctly. Performance and usage will suffer if it remains disabled.
How to Enable Javascript
Who’s Right About Stem Cell Research?

Advocates declare that embryonic stem cell research is a potential medical savior. Others decry it as the murder of innocent children. Whom should you believe? 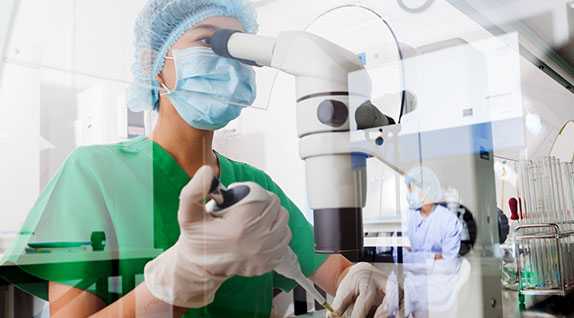 In the darkness of a fallopian tube, thousands of sperm race toward an egg, swimming over one another to their goal. Many reach the egg, but only one sperm burrows into the egg wall.

Within hours, the fertilized human egg divides into two embryonic stem (ES) cells, which have the ability to become any part of the body.

During the following days, additional divisions take place, with the ES cells retaining their pluripotent properties (the ability to form into nearly any type of human tissue). About the fourth day, the cells, now called a blastocyst, begin to specialize and lose their broad adaptive properties.

Many scientists yearn to harness the power of these cells. They believe doing so will allow them to create any healthy tissue in the human body: grow organs for transplant, mend severed spinal cords, and even cure diabetes, Parkinson’s disease, or Lou Gehrig’s disease.

Researchers also believe that stem cells could be a lifeline for certain species. There are calls for the creation of a “biobank” that would contain the stem cells of endangered animals to save them from extinction.

Touting its seemingly endless applications, stem cell research advocates push hard for funding. At first glance, it seems they have a point: Why not use these cells if they can so broadly aid mankind?

It is not that simple.

Researchers can only obtain human embryonic stem cells from bioethical “gray areas,” namely embryos left from in vitro fertilization (IVF)—the process of fertilizing eggs in a laboratory setting and later implanting some in a woman’s uterus so she can become pregnant. Embryos that are unused are generally destroyed. Although obtaining stem cells from the tissue of aborted fetuses, cells from umbilical cords, or somatic cell nuclear transfer (a technique for creating an ovum using a donor nucleus—the basis of cloning) can be done, there is less scientific flexibility.

The use of these additional IVF embryos is the main battleground for the embryonic stem cell debate, which is prevalent in the United States. While president, George W. Bush signed an executive order restricting federal funding on ES cell research. Upon taking office in 2009, President Barack Obama lifted those restrictions.

The controversy continues to divide the American people. A 2016 Pew Research Center poll found that 60 percent of Americans believe that the use of ES cells is morally acceptable, while 32 percent said it is morally wrong; 5 percent had no opinion and 3 percent said it depends on the circumstance.

The core of the issue can be defined by one just question: When does an embryo become a human being?

Although there is some contention among scientists on the ethics of stem cell research, the controversy generally falls to the world’s religions. They each bring surprisingly different beliefs.

• Catholicism: Rome holds a strong position against ES cell research. In documents posted on its website, the Vatican stated that while it “is convinced of the need to support and promote scientific research for the benefit of humanity,” extracting ES “cells from living human embryos raises ethical questions of the highest order.”

For a Catholic, life begins at conception and IVF “involves the destruction of human beings.” Thus, IVF and embryonic stem cell research are “morally illicit” or sin.

• Protestantism: Many Protestant groups follow a line of thinking similar to Catholicism. A report from the Commission on Theology and Church relations for the Lutheran Church Missouri Synod stated, “Human embryos, beginning with conception, are set on a course of development that leads continuously to an unfolding of unique human life.”

In other words, since we cannot know when life begins, it is safest to believe it is at conception.

Yet this is the position of only a small part of one denomination. Pentecostals, Methodists, non-denominational and other professing Christian groups have differing stances.

• Judaism: The general consensus among rabbis is that ES cell research is an important step for science. According to an essay printed in Jewish Action magazine, adherents of Judaism are required to, in a sense, “play God” as the “concept of emulating God is implicit in the mandate to heal and provide effective medical relief wherever possible.”

But Jewish law does forbid one to tamper with, or attempt to improve, Creation.

Many Jewish rabbis cite the Talmudic tradition that life begins after 40 days of gestation. Before then, it is considered “mere water” and of lesser human status. Therefore, using frozen embryos from IVF is acceptable and nearly obligatory given the mandate to “play God.”

Additionally, some rabbis believe embryos developed in a lab setting cannot develop into fetuses, and are therefore not alive.

• Islam: Muslims do not have a central religious authority that mandates a firm belief on stem cell research. Islam does differentiate the first 40 days of a pregnancy from thereafter. Many Muslims agree embryonic stem cell research is within the bounds of their religion, with some stipulations.

An essay by Dr. Muzammil Siddiqi, director of California’s Islamic Society of Orange County, made three recommendations for ES cell research within Sharia:

(1) Because stem cell research “has great potential to relieve human disease and suffering…it is obligatory…to pursue this research.”

(2) Limit the embryonic stem cell use to embryos from “in vitro fertilization and [that which] would otherwise have been destroyed.”

(3) Pursue “further research on the use of adult stem cells, to the point where it will be unnecessary to use embryos” (Pakistan Link).

• Buddhism: During a conference at the Mind Life Institute (a transcript of which was reprinted in Mandala), the Dalai Lama gave his thoughts on “when an embryo becomes sentient from the Buddhist point of view.”

According to the Abhidharma texts, “consciousness enters the embryo through the meeting of the regenerative substances of the father and mother, and at that point it becomes a sentient being…From the classical Buddhist standpoint, it has become a sentient being and extermination of that would be morally equivalent, almost, to killing a human being.”

However, the Dalai Lama admitted that knowing when an embryo becomes conscious is problematic: “A fetus, which is becoming a human is already a sentient being. But a fertilized egg may actually bifurcate into 8, 16, 32, 64 cells and become an embryo, and yet be naturally aborted and never become a human being. This is why I feel that for the formation of life, for something to actually become a human, something more is needed than simply a fertilized egg.”

Examining various religious viewpoints does not clarify the issue. In fact, it does just the opposite, with each new idea, opinion and theological interpretation fueling the confusion.

The litany of stem cell theology leaves out one voice—a voice that does not dabble in differing and disagreeing opinions of bioethics and religion. Although sacred texts were referenced in the quotes above, each failed to say exactly why God opposes or condones embryonic stem cell experimentation. His stance on embryonic stem cell research reveals His purpose for mankind. This is what is missing in all other belief systems. To understand it properly, one must look to where life began.

God created the first man, Adam, from the dust of the ground. The first book of the Bible, Genesis, recorded that God made man in His “likeness” (1:26). While God is spirit, He formed a physical Adam after His image.

God often creates in dualities. Man was first created as a physical being, with the second step in God’s Plan being that man could later be born as a righteous spirit being—a child of God.

Human life begins when a sperm fertilizes an egg—and after gestation, a baby is born. Mankind reproduces himself physically, which then supplies minds that God can beget with His Spirit to reproduce Himself spiritually.

The Creator’s ultimate purpose is to reproduce Himself—through man! But how?

Man has “dominion over” the animal kingdom (Gen. 1:26). His creative output proves this. While the human brain is only slightly more complex than any animal, each person has an additional element that sets him apart from the beasts of the earth—the human spirit (I Cor. 2:11; Job 32:8).

When God imparts His Spirit into a human mind, it combines with the human spirit, and the person becomes a spirit being in embryo. This fertilization of Spirit and mind is immediate—there is no lag or gray area during which a person is not on his way to being born a child of God.

One must have God’s Spirit to be a son of God (Rom. 8:9, 14). During the rest of his life, that person is to grow—or gestate—spiritually in “grace and knowledge” (II Pet. 3:18), allowing God to develop His holy, righteous and perfect character within him over a lifetime.

God the Father calls all spiritually begotten persons “sons of God” (I John 3:1). However, these individuals do “not yet appear what [they] shall be,” but upon Christ’s Return—and their spiritual birth—“they will be like Him” (vs. 2).

“Sure,” the skeptic retorts, “prove it.” And rightfully so. Why believe anything supposedly “from God” if it cannot be proven?

The Bible declares, “All scripture is given by inspiration of God” and is useful for instruction in righteousness (II Tim. 3:16). In other words, every word is from God and every word can apply to one’s life.

Again, the skeptic replies, “Prove it!”

This is a challenge. The booklet Bible Authority...Can It Be Proven? proves the validity of the Bible as the Word of God and its relevancy to your life.

Any topic that affects the lives of human beings—embryonic stem cell research or otherwise—must be viewed through the lens of God’s Word. This alone allows you to discern right and wrong, rather than the muddied philosophies and theologies of men. God’s Word is clear—you need not be confused.

Embryonic stem cell research skews the purpose of God’s Plan—to build a spiritual family. It should not be performed. Read the book The Awesome Potential of Man to more fully understand the overarching purpose of human life.

This is God’s view on stem cell research. It is up to you to prove it.