This website requires the use of Javascript to function correctly. Performance and usage will suffer if it remains disabled.
How to Enable Javascript
Afghanistan’s “Merry - Go - Round” War – How Will It Finally End?

How Will It Finally End?

How long can international coalitions fight to stabilize an unstable nation? 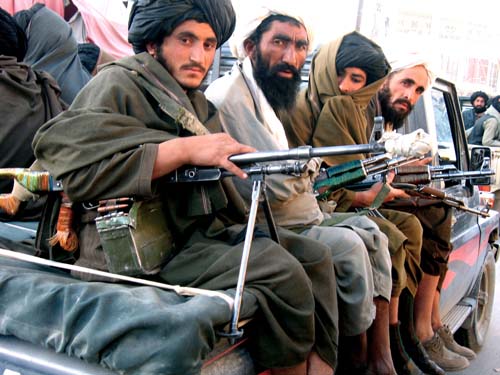 Through speeches, interviews and press conferences, American political figures describe the “unjust, unfounded” and “immoral” Iraq war. But in the same breath they praise the “well-intentioned” and “necessary” war in Afghanistan.

Critics claim the Iraq war has only been a huge distraction from the real terrorists in the mountainous country of Afghanistan.

The ongoing international battle against the Taliban, an extremist Islamic terrorist group, ousted from Afghanistan’s government in 2001, is often crowded out of news reports.

What is the current state of affairs in war-torn Afghanistan? With an international force attempting to keep terrorists at bay, does a solution lie just over the horizon?

After the September 11 attacks against America, U.S.-led forces overthrew the Taliban in “Operation Enduring Freedom.” This, however, did not completely free the region of the Taliban’s influence. The Taliban and al-Qaeda are still active, and constantly threaten the stability of the region. The most violent area has been the nation’s south. Osama Bin Laden—the leader of al-Qaeda, and said to have been responsible for the planning of 9/11—has still not been brought to justice by the U.S. government.

Two years ago, the Taliban increased its campaign against foreign troops, with its main goal to wear down public confidence in the Western-backed Afghan government and the presence of NATO/foreign forces. The United Nations estimates that since 2006 more than 12,000 people (350 said to be soldiers) have been killed. According to these same estimates, the total death count for 2007 was 8,000, well above previous years. Most of these deaths are said to be rebels, with about 1,500 of them civilian deaths.

Last year, the Taliban carried out more than 140 suicide attacks, consisting of car bombs and roadside bomb attacks. Due to the military now having better armored vehicles, the majority of the victims are civilians.

With the death toll swelling, the Taliban’s presence in Afghanistan continues as the international coalitions struggle to prevent the terrorists from regaining ground.

To ensure the nation does not become a safe haven for international terrorists and return to a state of anarchy, Western nations, along with the North Atlantic Treaty Organization (NATO), are seeking to control and stabilize the region.

The main force in Afghanistan—the International Security Assistance Force, organized and led by NATO—includes an estimated 47,000 troops from 40 nations.

A separate coalition is led by the U.S. and has approximately 20,000 troops in the country, with the majority American.

Of the nations involved, only a few—the United States, Britain, Canada and the Netherlands—are stationed in the dangerous southern region. France, Germany, Spain and Italy have forces in the more peaceful northern areas.

NATO has been calling for allies to increase their troops and help supply equipment. The international organization and the United States hope that more allies will expand their commitments.

The U.S. plans to send 3,600 more marines in late April to combat the increase of Taliban attacks expected when warmer weather arrives. The first group arrived in March, and will work under NATO. Some units will assist in training and developing Afghan security forces.

Other nations are following America’s lead. Canada’s Parliament recently voted to extend its country’s stay in Afghanistan for three more years. This would be the longest extension of Canadian troops since 2001, when the war began. Turkey is also considering increasing their 1,200-strong contribution, which is deployed in the much safer region of Kabul. Turkey has refused to send troops to the more dangerous south.

Many would agree that the only true solution to the crisis in Afghanistan is a permanent, stable government. Yet what most do not recognize is that this government could never succeed in the hands of men. For thousands of years, man has strived to bring lasting peace, yet he has sadly been without success.

Afghanistan is no different. Over the years, Afghanistan has seen many different forms of government. But each has ultimately failed to bring its people peace and prosperity.

Only one system is capable of bringing true peace and stability—the soon-coming kingdom of God, a government brought and administered by the hand of God, prophesied millennia ago to appear in our time.

The Bible, the only true source for revealed knowledge, describes a time just ahead when God will send Jesus Christ to establish a world-ruling supergovernment over all nations of earth. Notice this clear verse found in the book of Daniel: “And in the days of these kings shall the God of heaven set up a kingdom, which shall never be destroyed: and the kingdom shall not be left to other people, but it shall break in pieces and consume all these kingdoms, and it shall stand for ever” (Dan. 2:44).

Also read Isaiah: “And it shall come to pass in the last days, that the mountain of the Lord’s house shall be established in the top of the mountains, and shall be exalted above all the hills” (Isa. 2:2).

The ushering in of God’s kingdom will bring the problems facing Afghanistan to a screeching halt. A region that has long been a breeding ground for terrorists, and the epicenter of a thriving drug trade, will soon be transformed into a stable and peaceful nation. The drug trade will be wiped out. The Taliban’s presence will finally be nonexistent. Political infighting over troop levels will disappear. There will be no need for an international coalition, costing billions of dollars and many lives. In the future, real change will be enacted, but not by NATO forces or an American-led coalition. God’s government—and nothing else—will bring this to pass!

For more information, read our booklets Are These the Last Days? and How World Peace Will Come!

NATO’s involvement is part of a five-year plan among the governments of Afghanistan and the international community to establish workable solutions for the future. Due to Taliban resistance in the south, NATO forces face numerous challenges.

According to Afghan President Hamid Karzai, the country is far from being stabilized. After meeting with U.S. Vice President Dick Cheney in Afghanistan, Mr. Karzai expressed that the Afghan security forces could not stand on their own for quite some time. “Some day Afghanistan will be fully in charge of the security of this country, defending the borders. But that is not going to be anytime soon” (AFP).

Three main obstacles make attempts to stabilize the country difficult. Afghanistan has a greater population than Iraq, it is larger in terms of its land mass, and the number of soldiers is far less than those in Iraq (nearly one-third). Afghanistan’s difficult terrain requires that forces use specialized equipment, such as helicopters, for transport of troops and reconnaissance of the region. The country’s broken infrastructure and one of the largest quantities of deployed land mines in the world also make it difficult to curb the drug trade and root out terrorists. Piles of deployed land mines were left behind after the Soviet-Afghan war.

NATO is also struggling to find funding for their military activities in Afghanistan. Since 9/11, most of the nations belonging to NATO have cut their defense budgets to around 1% of Gross Domestic Product (GDP), while the United States has increased its budget to almost 5% of its GDP. Provisions for funding to successfully control the problem in the region have not been enacted.

NATO’s Secretary-General Jaap de Hoop Scheffer said, “This is one of the most challenging tasks NATO has ever taken on, but it is a critical contribution to international security” (The Guardian).

It has become an extended war, with some NATO allies growing weary of the “merry-go-round,” as Australian Prime Minister Kevin Rudd frustratingly described current conditions there. Mr. Rudd has become a vocal critic of NATO’s strategy and believes that no permanent solutions are being achieved. He recently implied the possibility of pulling Australian troops out of the international task force. His point appears to be valid, as the Afghanistan war seems to have no end in sight. NATO appears to be fighting a losing battle, desperately trying to stabilize an unstable nation.

You may also wish to read our article “Afghanistan’s Turbulent History.”