This website requires the use of Javascript to function correctly. Performance and usage will suffer if it remains disabled.
How to Enable Javascript
Afghanistan’s Turbulent History 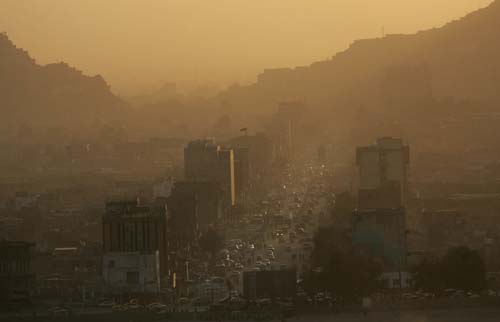 MCT
Kabul: The sun sets on the dusty streets of Afghanistan’s capital.

Afghanistan—with its abundant untapped resources and infamous drug trade—is a country with a tumultuous and violent past. Located in South Central Asia, and consisting of 34 provinces, each subdivided into districts, Afghanistan’s land mass encompasses 251,825 sq. miles (652,225 sq. kilometers). It is landlocked between several countries, and its longest border is with Pakistan to the east and south, stretching for 1,125 miles. It also shares borders with Iran to the west, Turkmenistan, Uzbekistan and Tajikistan in the north, and to the extreme northwest, China, at the end of the Vakhan Corridor.

Afghanistan’s history dates back to between 2000 and 1200 BC, when the Aryans—better known as the Assyrians, who later became the modern Germans—were thought to have populated the northern region, then known as Eranshahr, meaning “Dominion of the Aryans.”

The nation has been filled with turmoil from its beginning and is today rated among the most unstable countries in the world.

Historically, Afghanistan has served as a buffer zone between other powers, such as between the British Empire and the Soviet Union.

Throughout its existence, Afghanistan has experienced uprisings, coups and wars that have rendered the nation a land of lawlessness. Since gaining independence from British rule in 1919, it has enjoyed relative stability, but with moments of turmoil.

After World War II, a rivalry between the United States and the Soviet Union led to the Cold War, with East and West competing on various fronts.

In 1978, the Afghan government requested the intervention of Soviet forces to provide security and assist in the fight against Mujahedeen rebels. The conflict that ensued was between the Soviet forces supporting the Marxist People’s Democratic Party and the United States, who supported the Mujahedeen resistance. More than one million civilians have been killed, resulting in the exodus of five million Afghans to Pakistan, Iran and other parts of the world.

Since the U.S.-led invasion, the production of opium has soared. It is estimated that Afghanistan is now producing 87% of the world’s opium. This in itself equates to 50% of the country’s Gross Domestic Product, about $3,200 (USD) million per year.

The large drug industry contributes to the major corruption within the government. This in turn provides financial and logistical support to many international extremist groups that operate within its territory, as well as outside.

Another way the Taliban could see an increase in funds is through the nation’s resources. Due to the instability of the country, its natural resources have largely been untouched. One of the largest copper deposits in the world was discovered about 20 miles east of Kabul. It is estimated that the deposits could yield as much as 11 million tons of copper, which would result in a huge cash injection for the people of Afghanistan.

The government hopes that this supply will catapult the nation into the modern era. Ongoing exploration on the natural resources of the region have revealed that the country also has vast untapped deposits of zinc, silver, marble, coal, as well as 700 billion cubic meters of natural gas and 300 million tons of oil. These resources could soon become a contentious issue in the region.

In a war-torn Afghanistan with limited funding, projects to tap these resources will more than likely come from outside. Since it is landlocked in Asia, Western nations view the development of this wealth as more of a risk than an advantage.

Yet China has not stalled in acquiring the rights to these minerals, and sees Afghanistan as a means to providing China’s growing economy with the necessary resources it needs to keep pace with production. Agreements have already been signed with the China Metallurgical Group Corporation.

But there is a problem: Many of the resources are located in the southern regions of the country, where the Taliban is active. In order to mine these resources, China must make agreements with the Taliban, who in turn will expect money. These funds will then assist them in their military onslaught against NATO and support their Jihad (holy war) against the West.

After losing thousands of troops in the war, Soviet forces finally withdrew from Afghanistan in 1989. America’s secretive involvement in the conflict, which was the supply and training of the Mujahedeen rebels, was seen as a great victory. Following the withdrawal, the U.S. lost interest in the war-torn nation and did little to rebuild its economy. This left a void in the country since most in leadership positions had gone into exile.

Eventually, Afghanistan was taken over by the divided warlords of the Mujahedeen. Two years after the Soviet withdrawal, the Taliban, with the help of Pakistan and Saudi Arabia, regained two-thirds of the country from the Mujahedeen warriors. The Taliban returned to Afghanistan, where they became students in several of the religious schools.

They imposed the strictest adherence to Islamic law ever seen in the modern world, resulting in severe discrimination against women. For instance, women were prohibited from working and from being educated beyond the age of eight.

It was estimated that in 2002, 49% of men and 79% of women were illiterate. During the same year, it was reported that only 53% of boys and a mere 5% of girls were enrolled in elementary school. Then, if they were able to graduate from elementary school, only 32% of males and 11% of females continued their education in secondary schools.

During the Taliban’s reign of terror, many women were executed in public—for offenses such as continuing their education in an underground school or rising up against the abuse toward them. It eventually reached the point where they could not even visit a doctor if they were not accompanied by a male. Sicknesses were left untreated and numerous women became captives in their own homes.

The words of an Afghan lawyer, Belquis Ahmadi, ring true concerning this period (emphasis ours): “Afghan women have lost lives, family members, basic human rights, human dignity and the right to be respected. Soon they might lose something that destroys humanity. They might lose hope.”

You may also wish to read our article “Afghanistan’s “Merry-Go-Round” War – How Will It Finally End?”