This website requires the use of Javascript to function correctly. Performance and usage will suffer if it remains disabled.
How to Enable Javascript
Germany’s Vision for Europe 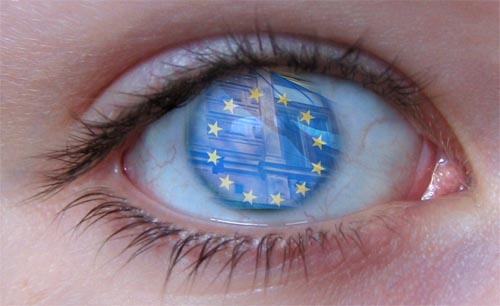 German Chancellor Angela Merkel proposed her nation’s vision for the future of Europe on Sunday, March 25, 2007, as she hosted the signing of the “Berlin Declaration” in Germany’s capital city.

The two-page document—brokered for months by Ms. Merkel among 27 European leaders—is an acknowledgement of the European Union’s past achievements, a call for the revival of a draft constitution, and a reminder to reform respected but ill-equipped political institutions.

Failure for reform to accommodate an ever larger European Union “would be a historic error,” she told fellow leaders prior to the signing ceremony.

Ms. Merkel is persuasively and insistently working toward a more unified Europe—one that would be able to “act decisively to satisfy hopes and needs of people of Europe, for a secure and prosperous future.”

Despite the fact that only three pens inked the Berlin Declaration—those of Angela Merkel, European Commission President Jose Manuel Barroso and President of the European Parliament Hans-Gert Poettering—all 27 member countries were represented at the ceremony. A tentative agreement of a “renewed common foundation” for Europe—an allusion to a revised draft constitution—was established. These member states were not even asked to sign to prevent “embarrassing refusals,” according to a Stratfor intelligence report.

Most notable among the constitution’s detractors are France and the Netherlands, which together had suspended the hopes of EU constitutionalists in 2005 by vetoing the draft treaty through referenda until at least 2006, after which the mandatory period of “pause and reflection” ended.

Since then, Ms. Merkel has been working closely with the French government—even refraining, at times, from disturbing political waters—to facilitate a preeminent partnership between the two influential nations. Thus far, the fruit of those efforts has been largely symbolic. 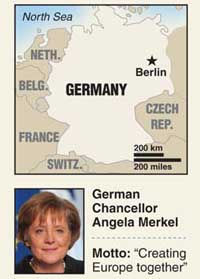 Adding to Germany’s struggle toward European unification, Poland’s President Lech Kaczynski recently stated, “The present idea would allow the EU to take over much of the running of national states, and that is not right in my opinion. Poland understands that, in certain issues, it is good to be a stubborn partner” (Euronews).

Only days after the staging of the Berlin Declaration, Poland demanded the proposed EU voting system detailed in the draft constitution be tailored to increase the authority of countries smaller than France and Germany.

The power struggle between EU members appears continuous and the situation remains unstable; a unifying force or circumstance will likely be required to allay differences.

The current draft of the EU constitution is a 1,000-page document that centralizes power, provides for common symbolism (e.g., a motto, anthem, flag, annual holiday, etc.) and offers the populace a somewhat left-of-center adaptation of America’s Bill of Rights. The draft requires abdication of national sovereignty to EU courts, inaugurates a single EU president to replace the current rotating office shared by member nations, and institutes a single office of foreign minister—with the opportunity and authority to address its own foreign policy.

Nations that ratify this draft will find themselves, as a whole, bound to a currency, military, populace and religion that will become a counterweight to the United States, though possibly more cumbersome to govern.

Ms. Merkel’s current ambition is to present a “road map” at a June EU Summit in Brussels, which will reveal plans for constitutional ratification by mid-2009. However, she rejected the possibility for a European über-nation to emerge: “There will not be a European federal state, we will maintain the diversity of the nation states” (Bild).

Recent and more aggressive attempts to unify Europe through the German ideal have failed.

In a 2001 gathering of fellow leftist leaders in Berlin, then-German Chancellor Gerhard Schroeder pressed a vision for a centralized Europe: “We need to strengthen our European institutions and decisively to further develop the European integration process.”

Only hours earlier, Mr. Schroeder had led a committee of his Social Democratic Party, which, without a single dissenting vote, approved plans for a strong EU executive branch, accompanied by a two-chamber parliament with expanded powers.

The emerging German political model sparked a contentious and emotional debate over the future of Europe. Many nations within Germany’s sphere bristled with alarm at the mention of a federated EU, citing their desire for autonomy. Among those were France and Britain, represented by then-leaders Lionel Jospin and Tony Blair, respectively. However, at that time both dodged public requests to confront the German proposals.

Angela Merkel’s philosophy of garnering consensus and safeguarding her vision through careful political accommodation has been largely successful. As captain of the third largest economy in the world and Europe’s single largest population, having EU leadership thrust upon her affords Ms. Merkel the flattering role of reluctant hero—far preferable to that of firebrand, as was the case with her predecessor.

Consequently, the chancellor’s vision is moving forward step by step, vote by vote, month by month.

Advancing a distinctly German strategy in 2007 is expedited by the coincidental timing of Germany’s simultaneous presidency of the EU for the first half of the year, and of the Group of Eight (G8). Representing roughly 65% of the world’s economic power, the G8 nations assemble annually, with the rotating presidency selecting the agenda. 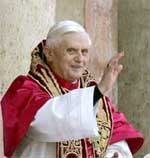 A reference to Europe’s foundational Judeo-Christian ethic or even the mention of religion is noticeably absent in the Berlin Declaration.

Pope Benedict XVI commented from Rome, “It is no surprise that today’s Europe, while it purports to be a community of values, seems to increasingly contest the existence of absolute and universal values.”

He added that Europe is committing an apostasy of itself in the process, warning of loss of identity.

As far as the Vatican is concerned, to accuse European leaders of apostasy is the ultimate insult. Benedict hopes it will grab the attention of the influential in Europe.

The Catholic Reporter observes, “Christianity is post-Western, Europe is post-Christian.” A changing religious demographic on the old continent dictates delicate language in order to attain unanimity and ratification of a revised draft constitution.

For example, France has taken a secular stance toward the preamble of the draft EU constitution, pressuring (in part) the drafters to write, “the cultural, religious and humanist inheritance of Europe,” instead of agreeing to a direct reference to God or Christianity. France’s opposition highlights the animosity of the political wrangling and the sensitivity to religious matters between EU member states.

However, mindful of Rome (even before the pope’s criticisms surfaced), a center-right division of those leaders in recent attendance in Berlin—including the German Chancellor—adopted a separate declaration mentioning “Judeo-Christian roots” as well as the contribution of Christian Democrats in Europe’s integration.

Leading up to the G8 conference in June, Germany remains a formidable exporter of goods worldwide, its unemployment rate has eased and a recent major tax increase has not dampened economic activity as much as many had feared.

Adding to Ms. Merkel’s favor, U.S. President George W. Bush’s political capital is being spent on a campaign of thrust and parry with America’s Democratic Party, while Britain’s Tony Blair and French President Jacques Chirac are heading toward the electoral exits, creating a timely vacancy of leadership on the world stage.

Lastly, Ms. Merkel is largely supported by EU leaders due to political successes, including negotiating a consensus on global warming. The European Parliament stated, “We used Commission proposals to get agreement in Council on far reaching conclusions…if it succeeds in setting ambitious objectives a lot of work is still needed to flesh them out—but that is how politics works.”

German benefits from a federalized European Union are cultivated from a broad palette. They include a single European market hungry for German exports, a highly competitive euro, a favorable employment situation due to artificial barriers favoring its citizens, a debate over smaller than feared net contributions to the EU and largely successful foreign policy, according to a study by two German non-governmental organizations.

For as much as Britain has embodied the Atlanticist ideal of cooperation between Europe and Northern America, Prime Minister Blair has espoused a stronger, more centralized Europe. Mr. Blair suggested he could hand over plans for a Mark II constitution to his successor, arguing a new treaty was needed to modernize the enlarged EU’s voting system and institutions.

Mr. Blair, whose attendance at the Brussels summit this year will be one of his last acts as prime minister, said the issue “needs to be resolved, and the sooner it is resolved the better” (Business Day).

Despite resultant agreement with Chancellor Merkel on the issue of a draft constitution and institutional reform, Mr. Blair has always favored a “European defense policy to complement NATO, while [French leader Jacques Chirac] wanted the EU to have a defense doctrine independent of the United States” (International Herald Tribune).

As unintentional accomplices to achieve a German ambition, both Britain and France successfully lobbied in 2003 for the creation of the EU’s special battle groups, which are comprised of highly mobile and well-trained combat troops.

Ms. Merkel concurs with the vision: “We need to get closer to a common army for Europe,” she told the mass-circulation German Bild newspaper two days before presenting the Berlin Declaration.

Last November, Kurt Beck, leader of the German Social Democrats, said the EU should become a “global peace power.” The statement marked the first time a German political party had advocated an independent European military with its own command structure and objectives.

In the world of a ratified EU constitution, former German foreign minister Joschka Fischer—an ardent, outspoken opponent of U.S. foreign military policy and at one time, Germany’s most popular politician—is widely speculated to covet the office of EU foreign minister.

Despite differing political ties, Mr. Fischer supports Ms. Merkel’s indisputably German brand of political hopes. In a landmark speech given at Berlin’s Humboldt University, in 2000, Mr. Fischer irritated many by suggesting the problem of overly bureaucratic EU political institutions can be solved by “the transition from a union of states to full parliamentarization as a European Federation…and that means nothing less than a European Parliament and a European government which really do exercise legislative and executive power within the Federation. This Federation will have to be based on a constituent treaty.”

Chancellor Angela Merkel deftly advances a vision for a united Europe by remaining diplomatically cautious, anticipating signs of opportunity like a coiled spring.

Ms. Merkel reflected, “the people of Europe will measure the performance of leaders on their success in strengthening Europe as a community providing people with prosperity and social cohesion. As I said in Berlin, the world won’t wait for Europe. We must ensure we bring Europe to [the] forefront of events on basis of shared values and objectives.”