This website requires the use of Javascript to function correctly. Performance and usage will suffer if it remains disabled.
How to Enable Javascript
A World Without Saddam Hussein

A World Without Saddam Hussein

All who feared the former Iraqi ruler would somehow return to power and continue his reign of terror can now breathe a sigh of relief—but for how long? 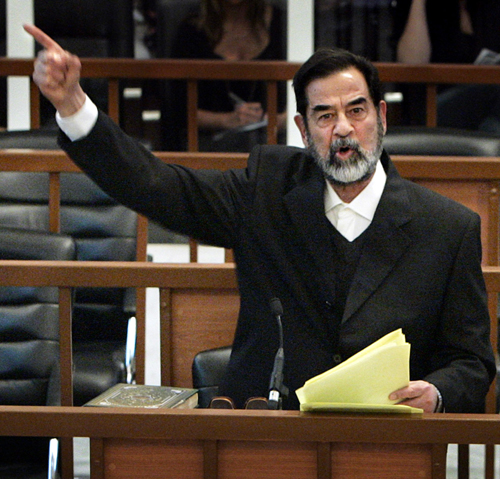 MCT
Saddam Hussein was convicted on November 5, 2006, of crimes against humanity.

But for how long?

Hours after Mr. Hussein met his end at the gallows, Shiite Muslims throughout Iraq, as well as in other parts of the world, danced in the streets. Though the Shiites, at 13 million, are the majority of Iraq’s population, the Saddam Hussein regime had imposed severe restrictions on their religious practice.

According to human rights watch groups, Mr. Hussein used allegations of prostitution to intimidate his opponents—charges that were often used to justify the barbaric beheading of women.

Under his regime, documented chemical attacks, from 1983 to 1988, resulted in the deaths of some 30,000 Iraqis and Iranians. It has been estimated that Saddam Hussein’s 1987-88 campaign of terror—which included mustard gas and nerve agent attacks—destroyed 2,000 Kurdish villages and killed at least 50,000 Kurds, and perhaps as many as 200,000.

Not even those of his own flesh-and-blood were safe, as Mr. Hussein murdered approximately 40 of his relatives.

As the hour of his execution drew near, the BBC reported that many freely expressed their thoughts regarding Saddam Hussein’s trial and death sentence.

“We are not surprised at this verdict,” commented the Iraqi Parliament Deputy Speaker. “Quite the contrary; this verdict was a long time in coming.”

U.S. President George W. Bush called Saddam Hussein’s trial and subsequent execution a milestone for Iraq’s young democracy, as it replaced the rule of a tyrant with the rule of law.

While European Union member-states such as the United Kingdom and Spain expressed that Mr. Hussein and other leaders in his former regime must answer for their atrocities, Germany rejected the execution. The EU upheld its official opposition to capital punishment, even with crimes against humanity as the charge. The Vatican viewed Mr. Hussein’s legal execution as punishing a crime with another crime.

Even Iran weighed in. While welcoming the death sentence, a spokesman for the Iranian Foreign Ministry reminded the world, “We cannot forget the Western protectors of Saddam who by supporting him prepared the ground for the execution of his crimes.”

“Today is better than tomorrow”

The hanging of Saddam Hussein removed one more murderous dictator from planet Earth. However, what does this ultimately mean for the Iraqi people—America—the world? Can we expect peace, security and prosperity to eventually break out in war-torn Iraq? Will the Iraqi insurgents lay down their arms and allow democracy to take hold? Will other Islamic militants give up their hatred for the West?

America is trapped in a catch-22 situation: Leave Iraq, thereby emboldening insurgent forces to continue their quest of turning the nation into an anti-Western Islamic theocracy—or stay for the long haul, thus adding fuel to the flames of anti-Americanism throughout the Arab World. 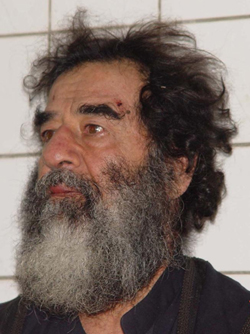 MCT
Saddam Hussein, after his capture in 2003.

The conflict in Iraq continues to escalate with each passing day, giving rise to a popular Baghdad saying: “Today is better than tomorrow.” Such low expectations of a hopeful future can easily be applied to other regional hotspots, where entire societies are held hostage to relentless suffering under brutal, human-imposed conditions.

Communist North Korea is being led to the brink of disaster as millions there are starving. Society has degenerated so far that there are now reports from the Chinese-North Korean border of human meat being illegally sold in North Korean markets!

Then there is Africa, a daily study in ongoing misery and pain. The Lord’s Resistance Army is wreaking havoc in Northern Uganda. In Sudan’s Darfur region, the rising death toll and the growing number of lives left destitute is a harsh, undeniable reality—yet amazingly, no one leader is being held responsible. Zimbabwe is experiencing its own level of economic chaos and extreme poverty, with inflation at 1,100% and a loaf of bread selling for $895 (Zimbabwean dollars)! And South Africa, having been freed from the decades-long injustices of Apartheid, is now in bondage to heinous acts of crime, earning the title “Rape Capital of the World.” How long will it take for this First World nation to disintegrate into another Third World nightmare?

The death of a tyrannical despot creates a vacuum, only to be filled by other Saddams if humanity continues on its deadly course.

America and her sister nations of the West might be tempted to sigh with relief at Saddam Hussein’s death. However, it must be remembered that Mr. Hussein was at one time a U.S. ally. These and other political alliances will come back to haunt the American and British peoples:

The Real Truth magazine analyzes the effects of the issues, trends and troubles plaguing mankind—restores plain understanding to the causes behind humanity’s ever-increasing problems—and points to the only real solution. In short, we announce the gospel—the “good news”—of the soon-coming kingdom of God!

Therefore, The Real Truth does not take political positions, nor side with or against men’s governments or leaders. Our position is strictly neutral.

If you would like to learn more, read our booklet Which Is the True Gospel? and our book Tomorrow’s Wonderful World – An Inside View!

Consider these excerpts from a book produced by The Restored Church of God titled America and Britain in Prophecy:

“The pride of American and British power continues to be broken, with our leaders in fear of what our critics and enemies—and the ever relentless press—will say. Authoritative leadership and decision-making is now systematically undercut and checkmated by this endless chorus of professional naysayers. Also, any leader daring to even hint that God might be involved in the affairs of men is lampooned—and accused of crossing boundaries between church and state. God never intended such an unnatural state.

“As both manmade and natural disasters increase in number and intensity, it is evident God’s protection around His people is even now being withdrawn. Headlines daily blare warnings of budget shortfalls, job losses, lack of growth, economic problems, growing social problems, enormous problems in our schools and families, and much more!

“We are now witnessing the sudden evaporation of the national wealth and greatness given to these nations. Just as fast as Britain, once called “Great” Britain, and America became global superpowers, their greatness and power is coming to an end. All our allies—our “lovers”—are turning against us, despising us. The once-powerful economic engine of America and Britain is quickly coming to a sudden halt—and it is futile to try to stop it!

“Why? We have ignored our Creator and turned from His laws and commands. As Abraham Lincoln exclaimed, ‘We have forgotten God’!

Where is the world going? Why is it filled with problems, troubles, evils and ills, causing unhappiness, confusion and misery of every kind? What lies ahead? Is there hope for a different—and truly better—world? Yes! A wonderful world—unlike anything ever seen—is coming. Its arrival is certain. This book presents an inside view of what it will be like!

“Now, God is turning Himself from us. And He is removing the wonderful blessings bestowed to us through Abraham’s obedience. The skeptic, who thinks that the power and influence our nations had in the world was our own doing, cannot explain why our seemingly unlimited wealth and prestige is slipping from our grasp.

“Just as history proves the power and blessing poured upon our nations, recent world developments evidence our decline.”

Why Does God Allow Dictators?

Speaking of the establishment of government leaders, the Bible states that “the powers that be are ordained [appointed] of God” (Rom. 13:1). It also states that God “changes the times and the seasons: He removes kings, and sets up kings: He gives wisdom unto the wise, and knowledge to them that know understanding” (Dan. 2:21; see also 4:17, 25).

Why would God allow dictators such as Saddam Hussein, Adolph Hitler, Joseph Stalin and countless others to rise to power? Why would He permit unspeakable atrocities to be unleashed under their reign? Why doesn’t God intervene?

All nations are rushing toward the grand smash conclusion to occur in the “last days.” Humanity plunges ahead—blind, pleasure-crazed and detached from important world events occurring daily. American, British, Canadian and other Western leaders would take action, if they only knew what lies ahead. Great prophetic truths, revealing amazing—indeed astonishing—climactic changes soon to stagger all civilization, go unrecognized. But Western leaders, with the rest of the world, remain in ignorance—WHY? Now you can learn what others have not understood!

The answer—which millions of professing believers fail to grasp—is this: This is not God’s world. For the last 6,000 years of human existence, our Creator has allowed men to do “that which was right in his own eyes” (Judges 21:25). The lasting peace, joy, security, prosperity and sense of purpose that all long for continues to be an unattainable dream because human beings do not know how to govern themselves. Governments of communism, socialism, monarchies, dictatorships and democracies have all failed under the guidance of human hands.

The world today is grim, and conditions will only grow worse. But the Bible speaks of a “world to come”—a future age when humanity will no longer be enslaved to misery and suffering. This will happen because the world tomorrow—a time of peace, happiness and universal justice—will be governed by God, not tyrants.