This website requires the use of Javascript to function correctly. Performance and usage will suffer if it remains disabled.
How to Enable Javascript
Study: U.S. Gun Death Rates Hit Highest Levels in Decades 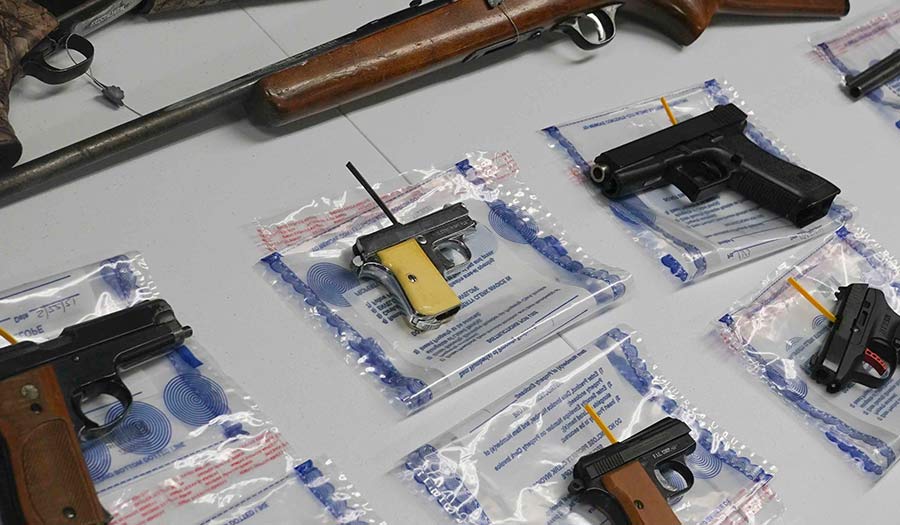 AP/Bebeto Matthews
A collection of illegal guns is displayed during a gun buyback event in the Brooklyn borough of New York (May 22, 2021).

The U.S. gun death rate last year hit its highest mark in nearly three decades, and the rate among women has been growing faster than that of men, according to a new study.

The increase among women is playing a tragic and under-recognized role in a tally that skews overwhelmingly male, the researchers said.

“Women can get lost in the discussion because so many of the fatalities are men,” said one of the authors, Dr. Eric Fleegler of Harvard Medical School.

The research is one of the most comprehensive analyses of U.S. gun deaths in years, said David Hemenway, director of the Harvard University’s Injury Control Research Center.

In October, the Centers for Disease Control and Prevention released data on U.S. firearm deaths last year, counting more than 47,000—the most in at least 40 years.

The U.S. population is growing, but researchers say the rate of gun deaths has been getting worse, too. America’s gun-related homicide and suicide rates both rose 8 percent last year, each hitting levels not seen since the early 1990s.

In the new study, the researchers examined trends in firearm deaths since 1990. They found gun deaths began to steadily increase in 2005, but the rise accelerated recently, with a 20 percent jump from 2019 to 2021.

Why did gun deaths rise so dramatically during the COVID-19 pandemic? That’s “a straightforward question with probably a complicated answer that no one really knows the answer to,” said Dr. Fleegler, an emergency medicine physician at Boston Children’s Hospital.

The researchers counted more than 1.1 million gun deaths over those 32 years—about the same as the number of American deaths attributed to COVID-19 in the last three years.

In a commentary accompanying the study, three University of Michigan researchers said the paper confirmed racial and sexual differences in U.S. gun deaths and that homicide deaths are concentrated in cities and suicides are more common in rural areas.

“Firearm violence is a worsening problem in the United States,” and will require a range of efforts to control, they wrote.

In a recent article about mass shootings, The Real Truth analyzed why there is so much gun violence today.

We wrote that “people are endlessly fascinated by these questions: What motivates these killers? Why did they do it? They want to make sense of the senseless. The popularity of true-crime documentaries and murder-themed podcasts makes society’s endless fascination clear.

“Another way to frame the question is this: Why is there evil in the world? For all of history, people have perpetrated malevolent acts. Think of one of the very first stories in the Bible where Cain killed his brother Abel. Murder has always been among the ugliest expressions of human nature.

“Yet what drives human nature is something few realize—and what science and police investigations can never discover. This bedrock fact about humanity is also detailed in the Bible.”

Mass Shootings: An American Epidemic
Gun deaths in the U.S. spiked during the COVID-19 pandemic. What is driving this evil scourge?