This website requires the use of Javascript to function correctly. Performance and usage will suffer if it remains disabled.
How to Enable Javascript
School’s Out: Pakistan Floods Raise Education Fears for Millions 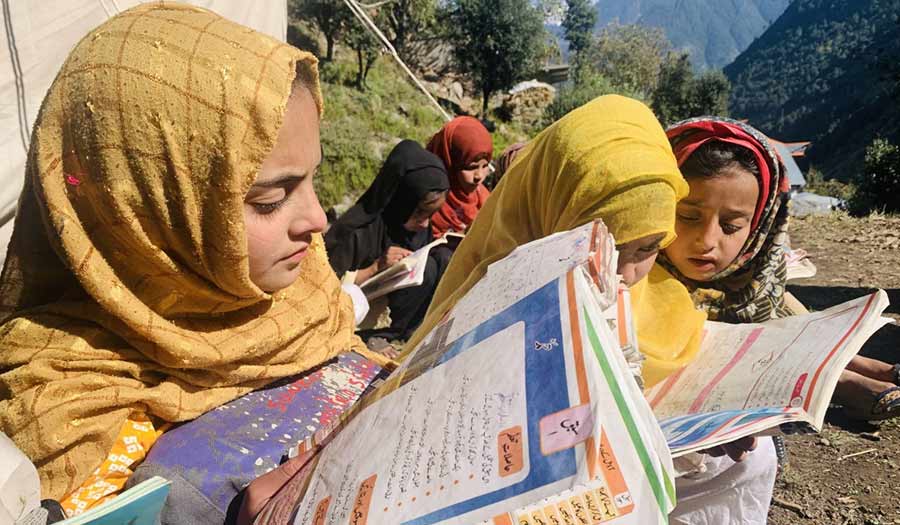 Thomson Reuters Foundation/Imran Mukhtar
A group of girls, including Sinain Bibi, reads at a makeshift school in a village in Swat district in Pakistan’s northwest Khyber Pakhtunkhwa province (October 24, 2022).

LAGAN KHAR, Pakistan (Thomson Reuters Foundation) – When flooding devastated northwest Pakistan in late August, 8-year-old Sinain Bibi lost out on about two months of education after half of her school building was swept away, along with the wooden bridge that connected her village with the school.

Bibi must now embark on a treacherous trek each day to attend a makeshift school, held in a tent on a riverbank in Khyber Pakhtunkhwa province. She is worried about the class time she has missed and said it would take her a while to catch up.

“The calamity has seriously disturbed my studies as I couldn’t learn a single lesson since my school was closed,” Bibi said outside the temporary school in the village of Lagan Khar village, in Swat district.

“I’ve even forgotten those lessons which I had learned before my school was shut down,” she said.

The catastrophic deluge—brought on by record monsoon rains and melting glaciers—killed more than 1,700 people and has caused over $30 billion in damage.

Pakistan is now facing not only humanitarian and health emergencies—with 33 million people, about a seventh of the population, impacted by flooding—but also an education crisis, communities and officials warn.

The UN children’s agency (UNICEF) said last month that the flooding has damaged or destroyed more than 26,600 schools nationwide, while at least 7,060 others are being used as temporary relief camps and shelters for the displaced.

More than 3.5 million children have had their education disrupted, UNICEF said, in a country that even before the floods had the world’s second highest number of out-of-school children: 22.8 million of those aged 5-16, or 44 percent of that age group.

“Having already endured some of the world’s longest school closures due to the [COVID-19] pandemic, [Pakistan’s children] are experiencing yet another threat to their future,” UNICEF’s global education director Robert Jenkins said in a statement.

In Khyber Pakhtunkhwa, fears are growing over the availability of funds and other help to repair or rebuild schools following the flooding, with education advocates and teachers concerned about the prospect of more school dropouts.

“The disaster has seriously disturbed the reading, writing and learning skills of the children while they remained away from their books,” said Adnan Khan, a teacher at the Government Primary School Bair, which Bibi attended before the inundation.

‘School Is the Only Hope’

While the provincial government of Khyber Pakhtunkhwa has managed to establish makeshift tent schools to educate children whose classrooms were destroyed by the flooding, local activists and teachers say there is a lack of space and basic facilities.

The tent in Lagan Khar village—set up by Sarhad Rural Support Programme, an NGO—is too small to accommodate all of the pupils, and lacks electricity, water, bathrooms and heating.

Khan, the teacher, said the latter in particular was a concern with temperatures falling in winter. He worried that a lack of heat would make it impossible for children to continue to learn in the tent throughout December.

About 20 of the damaged school’s 60 pupils have not returned since the tent was erected in late October, said fellow teacher Sher Ali, amid concerns in the community that many children in the poverty-hit area would ultimately drop out of education.

Gulab Khan, a 50-year-old laborer, said most of the children who had left school were helping their families to eke out a living in the aftermath of the floods—from grazing livestock to collecting firewood for cooking and heating homes.

“School is the only hope for both parents and children of the village,” said Gulab Khan, whose three children attend the Government Primary School Bair. He urged the local education authority to organize funding for a new building.

Zubair Torwali, head of local NGO Idara Baraye Taleem-o-Taraqi (IBT), said it was “unfortunate” that only the Swiss Agency for Development and Cooperation (SDC) had so far helped to repair schools, roads and bridges in the area.

The provincial government has done nothing to-date, he said.

“The situation is worrisome for us because the agency [SDC] plans to pack up at the end of November after completing its work and no other organisation so far has extended a hand for the rehabilitation of schools,” Mr. Torwali said.

The main problem in the area, he said, is that many of the 70-odd local schools damaged by the floods have been cut off from nearby communities due to collapsed bridges and destroyed roads.

Khyber Pakhtunkhwa’s education secretary Motasim Billah Shah said the local government would “bring all dropouts back to school” as it had done following the COVID-19 pandemic.

The government plans to repair or reconstruct all of the 2,000 flood-hit schools in the province within eight months, with initial estimates showing a cost of at least $45 million, according to Mr. Shah.

The official said the government would pay from its own pockets but also rely on financial support from institutions such as the World Bank and UNICEF.

In the meantime, the province is renting some buildings to use as makeshift school facilities, he said.

Amid the funding and logistics considerations, Pakistan’s prime minister, climate minister and other officials called for support at the U.N. COP27 summit in Egypt this month.

Pakistan’s leaders told the conference that the nation needed not only debt relief but “loss and damage” funding—from a new funding facility agreed upon at the meeting—to recover from the floods.

Pakistan may also be one of the first recipients of help from a new G7-backed “Global Shield” initiative announced at the U.N. climate talks.

“We are now in the frontline of vulnerability,” despite producing few of the fossil fuel emissions that are said to drive climate change disasters, according to Sherry Rehman, the country’s environment minister.

Back in Lagan Khar, 8-year-old Bibi said she was impatient for her school to be rebuilt so she could more easily finish her education and inspire others.

“I want to become a teacher to ensure no girl in my village remains illiterate anymore,” she said.