This website requires the use of Javascript to function correctly. Performance and usage will suffer if it remains disabled.
How to Enable Javascript
UN: Children in Haiti Hit by Cholera as Malnutrition Rises

UN: Children in Haiti Hit by Cholera as Malnutrition Rises 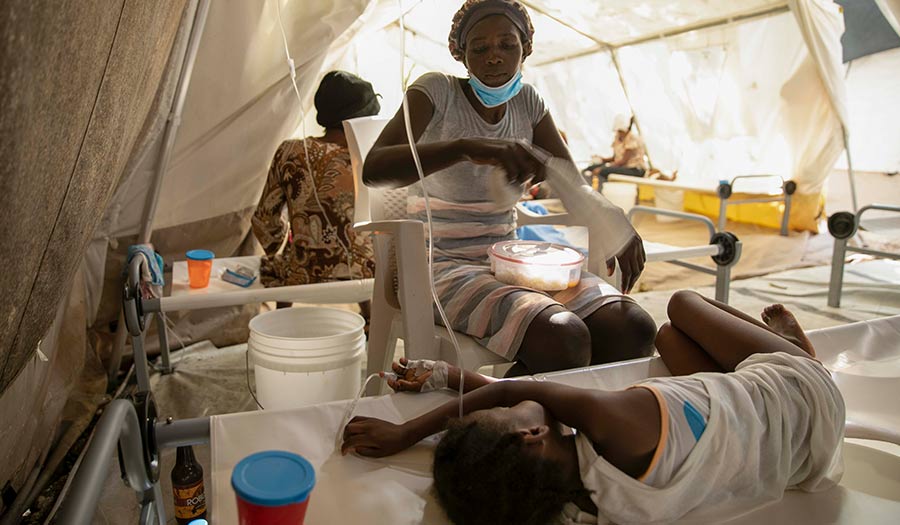 AP/Odelyn Joseph
A woman uses a towel to swat flies away from her daughter stricken with cholera, at a clinic run by Doctors Without Borders in Port-au-Prince, Haiti (Nov. 11, 2022).

PORT-AU-PRINCE, Haiti (AP) – A cholera outbreak sweeping through Haiti is claiming a growing number of children amid a surge in malnutrition, UNICEF announced Wednesday.

The deadly combination means that about 40 percent of cholera cases in the impoverished country of more than 11 million inhabitants now involve children, with 9 out of 10 cases reported in areas where people are starving, according to the United Nations agency.

“We have to plan for the worst,” Manuel Fontaine, director of UNICEF’s Office of Emergency Programs, told The Associated Press on Tuesday during a visit to Haiti.

Cholera has killed at least 216 people and sickened more than 12,000 since the first deaths were announced in early October, according to the Haitian Health Ministry and Pan American Health Organization. They say about 9,300 people are currently hospitalized with the disease. Experts believe the number is much higher due to underreporting.

UNICEF and Haiti’s government are seeking at least $28 million to help feed, hydrate and care for 1.4 million people affected by the crisis, with that number expected to increase as malnutrition worsens, especially in urban areas such as the Cite Soleil slum in the capital of Port-au-Prince, something that hasn’t been seen before.

“Cholera and malnutrition are a lethal combination, one leading to the other,” Mr. Fontaine said.

On a recent morning at the Gheskio medical clinic in Port-au-Prince, nurses, doctors and social workers tended to malnourished children who also were fighting cholera.

“This is a challenge for us,” said Dr. Karine Severe, who runs the clinic’s cholera department. “When the children are malnourished, it takes more time for them to recover.”

She estimates that malnutrition cases have increased by at least 40 percent in recent weeks, with nurses feeding children soup in the morning and rice, beans, meat and vegetables in the afternoon to help them gain weight.

It’s food that not many parents can afford in a country where about 60 percent of the population earns less than $2 a day.

Roselord David, 40, says she and her five children had to flee Cite Soleil after warring gangs set her house on fire. They temporarily lived in a public park and then moved in with her sister as she continues to struggle to find food for her children.

A social worker who spotted her emaciated 5-year-old daughter at the park urged Ms. David to take her to the clinic.

“They told me she was suffering from malnutrition,” Ms. David said in a quiet voice, embarrassed to confide her family’s problems in the clinic packed with patients.

Nearby, a 15-year-old teenage boy was sleeping, an IV in his thin arm.

His friend, Island Meus, said she was taking turns with his mother to care for him.

“He sometimes goes without food,” she confided, adding that he occasionally eats a bowl of rice with plantains when his family can afford it.

Haiti’s government recently requested cholera vaccines, but there’s a worldwide shortage of them and 31 countries are reporting outbreaks, so it’s unclear if and when they will arrive. However, Mr. Fontaine said Haiti would be given priority.

The country’s first brush with cholera occurred in 2010 after U.N. peacekeepers from Nepal introduced the bacteria into the country’s largest river by sewage. Nearly 10,000 people died, and more than 850,000 became ill.

This time, the situation is more complicated, said Boby Sander, Haiti director for Food for the Hungry. Nearly half of those sick with cholera are now younger than 15, and they are struggling to survive given the deepening malnutrition crisis, he said in a phone interview.

The situation also is worsening because gang violence has spiked, preventing aid groups from reaching those who need it the most. How Haiti Endures
Reflecting on a 2019 trip to the Western Hemisphere’s poorest nation—and everything it has suffered since—helps reveal how people can maintain hope no matter what.