This website requires the use of Javascript to function correctly. Performance and usage will suffer if it remains disabled.
How to Enable Javascript
Israel’s Netanyahu Officially Tapped to Form Government 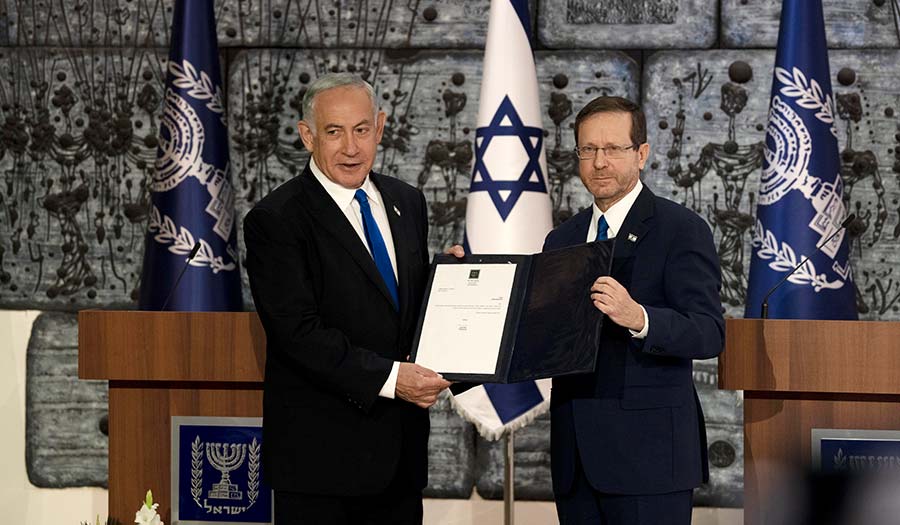 TEL AVIV, Israel (AP) – Israel’s president, Isaac Herzog, officially tapped former Prime Minister Benjamin Netanyahu to form a government on Sunday, opening the door for the likely return to power of the long-serving leader after a one-year hiatus. With Mr. Netanyahu comes what’s expected to be Israel’s most right-wing coalition ever.

Elections earlier this month indicated a clear win for Mr. Netanyahu and his ultra-Orthodox and ultranationalist allies and ended the short-lived, ideologically-diverse government that had ousted him last year after Mr. Netanyahu’s 12 consecutive years in power.

Though political horse-trading began as soon as the election results firmed up, Sunday’s development means Mr. Netanyahu now has up to six weeks to conclude negotiations and cobble together a government.

Mr. Netanyahu struck a conciliatory tone at the Jerusalem event where Israel’s ceremonial president bestowed upon him the task of forming a government. Mr. Netanyahu played down concerns by Israeli liberals and some of the country’s international allies that Israel was “entering a dark tunnel” with his expected government.

With his allies keen on gaining power and ending the outgoing coalition’s rule as soon as possible, Mr. Netanyahu will likely try to quickly wrap up negotiations. But key portfolios, including finance and defense ministries, could prove a sticking point and Mr. Netanyahu’s partners could seek to drag out talks to achieve their aims.

Mr. Netanyahu returns to power after five elections in less than four years that were all essentially a referendum on his fitness to serve while on trial for corruption. He was toppled last year by a coalition of eight parties that united over their distaste for Mr. Netanyahu but ultimately collapsed over infighting. Mr. Netanyahu served as opposition leader during that time.

Mr. Netanyahu is expected to emerge from negotiations with a stable majority coalition of 64 seats in the 120-member Knesset.

Mr. Netanyahu faces charges of fraud, breach of trust and accepting bribes in a series of scandals involving media moguls and wealthy associates. In exchange for their policy priorities and plum government appointments, Mr. Netanyahu’s likely coalition partners have promised to advance a series of legal reforms and to weaken the Supreme Court, measures that could make his legal woes disappear.

Mr. Netanyahu’s most prominent partner is Itamar Ben-Gvir, an extremist lawmaker who wants to expel Arab lawmakers and whose views were once on the fringes of Israeli politics. He is the top candidate of the far-right Religious Zionism party, which earned 14 seats in the polls, making it a key ally for Mr. Netanyahu.

Mr. Ben-Gvir, who has been repeatedly convicted for charges of incitement and supporting a terror group, billed himself as a law-and-order candidate and is seeking the public security ministry, which is in charge of the police. With the police overseeing key holy sites in Jerusalem, his appointment to such a sensitive post could inflame tensions with the Palestinians.

Religious Zionism’s leader, Bezalel Smotrich, a West Bank Jewish settler who supports annexing parts of the Palestinian territory, is vying for the defense ministry, the main enforcer of Israel’s open-ended occupation of the West Bank.

Both of those expected appointments have sparked concerns among Israel’s allies abroad, including its most strategic partner, the United States, over the government’s hard-right shift, which could have wide-ranging implications on the Palestinians and the region.

Meanwhile, Mr. Netanyahu’s ultra-Orthodox allies have pressed for increased budgets for their constituents, many of whom do not work and receive government stipends for studying Jewish texts. Experts have warned that Israel’s future economic prospects are in danger if the ultra-Orthodox are not integrated into the workforce.

Aiming for the finance ministry is ultra-Orthodox politician Aryeh Deri, who was indicted last year for tax offenses and served time in jail in the early 2000s for bribery, fraud and breach of trust. 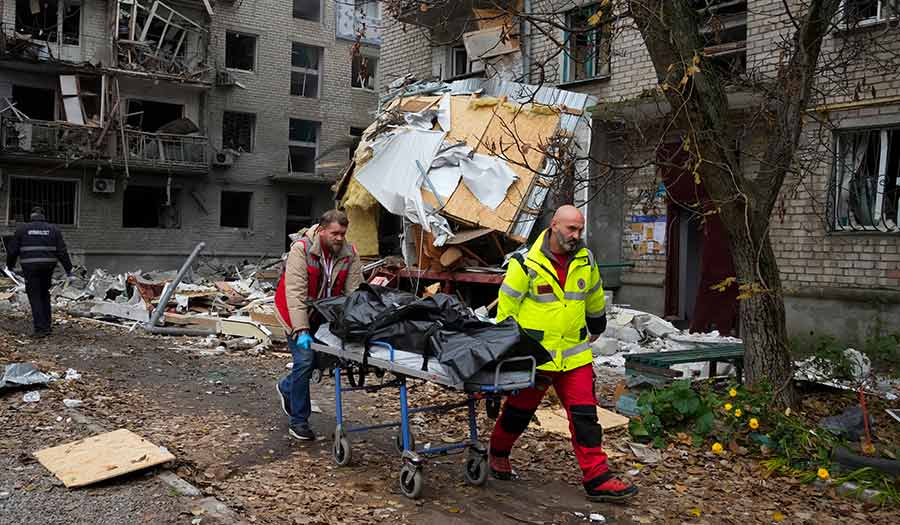 Explainer: How Important Is a Russian Retreat from Kherson?
KYIV, Ukraine (AP) – Ukrainian officials said Friday that Ukrainian flags were appearing “en masse and all over the place,” in the wake of Russia’s retreat from the southern region of Kherson, one of the four regions in Ukraine that Russian President Vladimir Putin annexed in September.