This website requires the use of Javascript to function correctly. Performance and usage will suffer if it remains disabled.
How to Enable Javascript
Suspected Chinese Rocket Debris Found in Philippine Waters 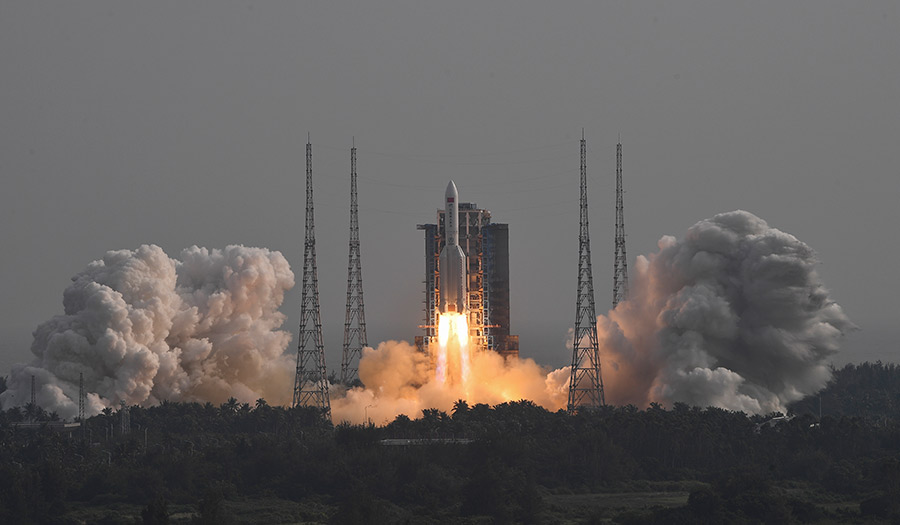 MANILA, Philippines (AP) – Philippine officials said Wednesday suspected debris from a recent Chinese rocket launch has been found at sea off of two provinces and they were pressing efforts for Manila to ratify two U.N. treaties that allow people to seek compensation for damage or injury from space launches.

The Philippine Space Agency said the metal debris found separately this week off Busuanga island in western Palawan and in Calintaan town in Occidental Mindoro province were highly likely to be parts of China’s Long March 5B rocket blasted last week from the Wenchang Space Launch Center on Hainan island.

The rocket carried a module with laboratory materials for a space research station being built by China.

The rocket parts were found near seawaters where the Philippine Space Agency had earlier warned the public the debris would likely fall. The agency said its experts had examined pictures of the suspected debris, including one that shows what appears to be a part of the Chinese flag.

The rocket’s booster was projected to crash down offshore about 45 miles from Scarborough Shoal, a disputed fishing ground off the northwestern Philippines, but there has been no report of any debris being found in the area, the space agency said.

It advised the public to immediately inform authorities of any sighting of the suspected rocket part and warned people not to retrieve or come in close contact with it.

Debris from past Chinese rocket launches has crashed down in the country’s waters in the past.

The country’s space agency said it was pressing efforts to help hasten Philippine ratification of the U.N. Registration and Liability conventions, which provide the legal basis for people to claim compensation for damage or injury “that is caused by a space object of another state.”

The space agency said the treaty ratifications were a top priority and added it “would like to reiterate its sustained efforts to promote and encourage accountability among nations for objects launched into space.”

Rocket parts that detach before reaching space should by design fall back offshore soon after a launch. While such debris is unlikely to fall on land or inhabited areas in the Philippines, it still poses a considerable threat to ships, aircraft, fishing boats, and other vessels that will pass through the drop zones, the agency said.

China has faced criticism for allowing rocket stages to fall to Earth in an uncontrolled manner before. NASA accused Beijing last year of “failing to meet responsible standards regarding their space debris” after parts of a Chinese rocket landed in the Indian Ocean.