This website requires the use of Javascript to function correctly. Performance and usage will suffer if it remains disabled.
How to Enable Javascript
Report: Hurricane Ian Farm Loss Could Reach $1.56 Billion 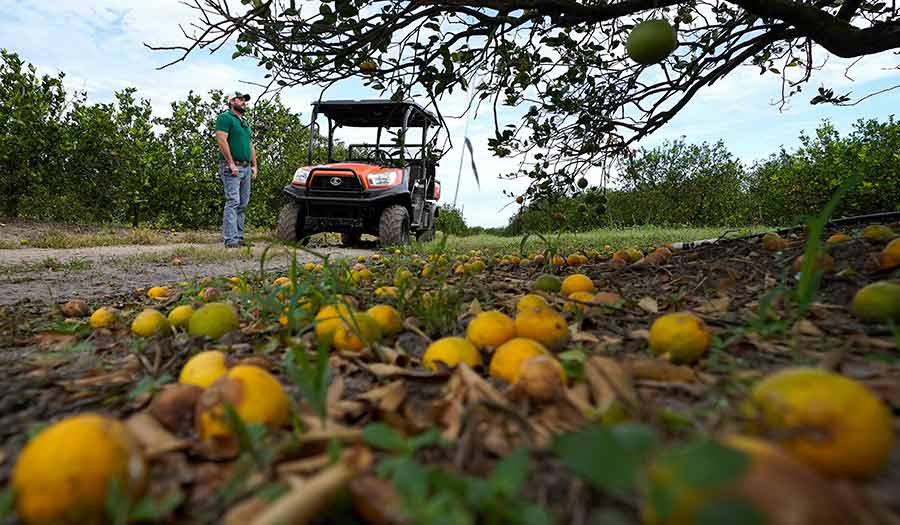 AP/Chris O’Meara
Fifth generation farmer Roy Petteway looks at the damage to his citrus grove from the effects of Hurricane Ian in Zolfo Springs, Florida (Oct. 12, 2022).

ST. PETERSBURG, Florida (AP) – Agriculture losses in Florida from Hurricane Ian’s high winds and drenching rains could reach $1.56 billion, with citrus, cattle, vegetable and melon operations among the hardest hit, the University of Florida reported Tuesday in a preliminary estimate.

The school’s Institute of Food and Agricultural Sciences said there could be many impacts that are yet to emerge from flooded acreage and depend in part on whether some damaged crops can be replanted to salvage some of the winter vegetable growing season.

“There’s still a lot of uncertainty,” said Christa Court, an economist and director of economic analysis for the institute. “The effects can be very different in a single location.”

The estimated losses this year are for a high scenario of $1.56 billion and a low potential loss of about $787 million. That’s in an area of Florida where total agricultural production is valued at more than $8 billion on an annual basis, according to the report.

“It’s not completely devastating to the entire agriculture industry in the state,” Ms. Court said during an online news conference. “Some of the seasons were just getting started.”

Hurricane Ian swept ashore September 28 in southwest Florida as a Category 4 storm with maximum sustained winds estimated at 155 mph, then bisected the center of the state, where most agricultural production is located. About 5 million acres of farmland were affected by the storm, according to the UF report.

Before the storm, citrus production in Florida was already forecast to drop by a third compared with the year before, in part because of winter freezes and ongoing disease problems. Now, a primary source of orange juice for much of the nation will take another hit, with losses estimated at as much as $304.2 million.

And the harvest season for oranges, grapefruit, tangerines and similar fruit was just beginning.

The University of Florida loss estimates do not take into account the impact on consumer prices, but the storm is likely to press prices upward and force orange juice producers to rely even more heavily on California and imported oranges from Latin America.

The estimated loss for vegetable and melon crops in Florida ranges from $208 million to $393 million. For horticultural crops—flowers, landscape plants, ornamental trees, sod grass—the loss could top $297 million. And for cattle and other animal production it is as much as $221 million.

The greatest unknown is the effect flooding and heavy rains from Hurricane Ian will have over the long term. The university report indicates more than 20 inches of rain fell in places where the storm center passed, with 12 inches common outside that zone. Several rivers in farm regions set new flood stage records.

Some citrus trees weakened by the storm could die. Cattle that survived a flood could die from disease or injury and could have problems obtaining enough high-quality food in damaged pastures.

The complete damage picture in the flood areas, the report noted, “cannot be determined until fields dry out.”