This website requires the use of Javascript to function correctly. Performance and usage will suffer if it remains disabled.
How to Enable Javascript
3 Million Children May Miss a Semester in Flood-hit Pakistan

3 Million Children May Miss a Semester in Flood-hit Pakistan 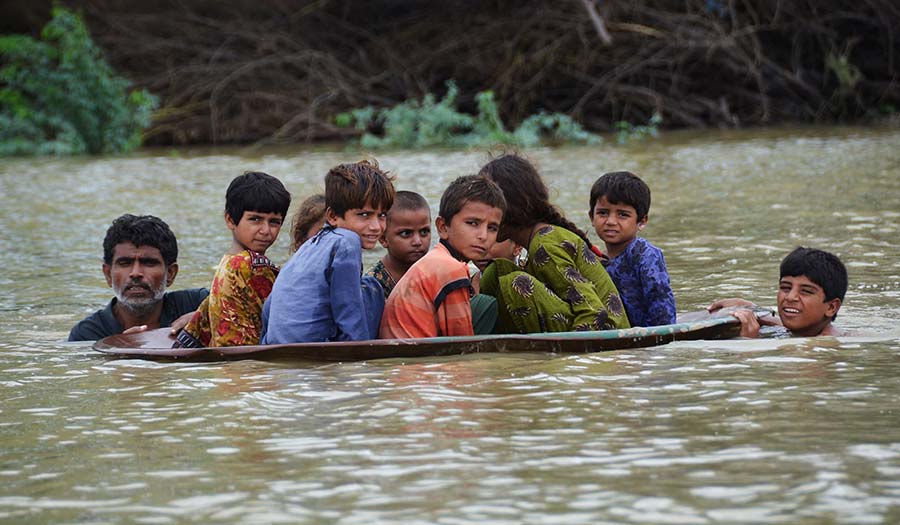 Unprecedented deluges since mid-June have affected more than 33 million people, inundated millions of acres of land and devastated infrastructure, including education facilities.

Local authorities have set up temporary learning centers in flood-hit areas to enable children to keep studying. However, officials say these measures are not enough, given the scale of destruction.

In southern Sindh province, Pakistan’s worst-hit area, flooding has damaged about 15,000 schools, where 2.4 million children were enrolled, according to the local education department.

It has raised fears that at least 2.8 million children across the country may miss a semester, officials at the Planning Commission and National Disaster Management Authority told The Associated Press. Pakistan, UNICEF and other agencies have set up scores of temporary learning centers, they said.

On Thursday, Planning Minister Ahsan Iqbal told journalists at the military-backed National Flood Response and Coordination Center that the deluges have caused so much destruction that relief and rehabilitation work will continue for two years.

The floods have killed 1,666 people, and damaged 643 schools in Baluchistan, 109 in Punjab and 287 in Khyber Pakhtunkhwa provinces. The majority of those killed or affected by the disaster are women and children, according to data released Wednesday by the National Disaster Management Authority.

A World Bank report released Wednesday said the flooding had heavily impacted schools. The Government High School Ahmadani, in Punjab’s Dera Ghazi Khan district, had served generations of students since 1916. But it was no longer functional because of flood damage, it said.

“An estimated 3.5 million children have had their schooling disrupted,” the World Bank report said.

It quoted Gohar Abbas, an education activist, as saying many schools have been transferred to emergency shelters where families have temporary accommodation.

The new government data comes as UK-based charity Save the Children estimates that almost half of flood-affected families are sleeping outside in tents or makeshift shelters.

It surveyed 1,200 households in the four worst-hit provinces. Most of the families surveyed had lost their homes and were living in squalid conditions near roadsides, using pieces of cloth or tarpaulin for shelter from monsoon rains.

Save the Children’s country director in Pakistan, Khuram Gondal, said Pakistan was now in the grip of a major health emergency.

“In Sindh province, I saw hundreds of thousands of people living in filthy conditions in makeshift camps—some with only a plastic sheet to protect themselves from the heavy monsoon rains,” Mr. Gondal said. “We’re seeing children dying from waterborne diseases every day, and things will only get worse the longer they go on sleeping outside without shelter, food or water.”

He said teams on the ground were doing everything they can to ensure people have food, shelter, and clean drinking water. “But the reality is, there aren’t nearly enough funds to meet the desperate level of need.”

On August 31, the United Nations and Pakistan issued an appeal for $160 million in emergency funding to help flood victims.

UNICEF last week renewed its appeal for $39 million to help the most vulnerable, saying only a third of the sum had been met so far.