This website requires the use of Javascript to function correctly. Performance and usage will suffer if it remains disabled.
How to Enable Javascript
More Rain in Appalachian Floods, Curfews Imposed Due to Looting

More Rain in Appalachian Floods, Curfews Imposed Due to Looting 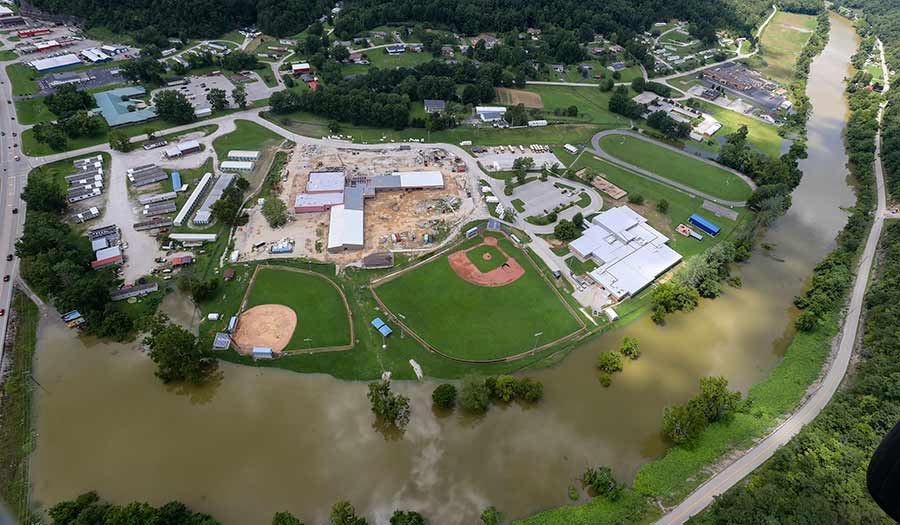 Michael Clevenger/Courier Journal via AP
A river is still high around the homes in Breathitt County, Kentucky, after historic rains flooded many Appalachian mountain communities (July 30, 2022).

LOUISVILLE, Kentucky (AP) – Another round of storms hit flooded Appalachian mountain communities where more than 30 people were killed and search and rescue teams found more bodies on Monday.

Hundreds of people remain unaccounted for and the death toll of 30 will rise, said Governor Andy Beshear, who noted that bodies which are not yet part of the official death count have been recovered. More than 12,000 customers remained without power, many because their homes and businesses have been destroyed or are not fit for habitation. Shelters were housing at least 300 people.

The floods were unleashed last week when between 8 and 10.5 inches of rain fell in just 48 hours in parts of eastern Kentucky, southern West Virginia and western Virginia. Radar indicated up to 4 more inches of rain fell Sunday, and the National Weather Service warned that slow-moving showers and thunderstorms could provoke more flash flooding through Tuesday morning

“If things weren’t hard enough on the people of this region, they’re getting rain right now,” Mr. Beshear said Monday at the capital. “Just as concerning is high winds—think about how saturated the ground has been—it could knock over poles, it could knock over trees, so people need to be careful. And it’s even going to get tougher when the rain stops. It’s going to get really hot, and we need to make sure people are ultimately stable by that point.”

Among the lives, homes and businesses swept away in the floods was some of the region’s irreplaceable history. Appalshop, a cultural center known for chronicling Appalachian life for the rest of the world, was assessing the extensive damage at its repository of Appalachian history and culture, where historic documents and artifacts were flushed out of the building.

Mr. Beshear said he saw while touring the disaster area Sunday how people have been helping their neighbors.

“These are amazing folks. They’re hurting, but they’re strong. And it’s amazing to see them helping each other, even when they’ve got nothing left,” he said.

General Daniel Hokanson, Chief of the U.S. National Guard Bureau, said in an Associated Press interview on Sunday that about 400 people have been rescued by helicopter. “In light of the devastation, the response is going pretty well,” he said.

The governor canceled a trip to Israel that had been scheduled for later this week, saying “I cannot be overseas while the people of eastern Kentucky are suffering.”

Meanwhile, nighttime curfews were declared in response to reports of looting in two of the devastated communities—Breathitt County and the nearby city of Hindman in Knott County.

Breathitt County Judge Executive Jeff Noble declared a countywide curfew from 10 p.m. to 6 a.m., County Attorney Brendon Miller said Sunday evening in a Facebook post. The only exceptions will be for emergency vehicles, first responders, and people traveling for work.

“I hate to have to impose a curfew, but looting will absolutely not be tolerated. Our friends and neighbors have lost so much—we cannot stand by and allow them to lose what they have left,” the post said.