This website requires the use of Javascript to function correctly. Performance and usage will suffer if it remains disabled.
How to Enable Javascript
Explainer: How Was Turkey’s Veto of Nordic NATO Bid Avoided?

Explainer: How Was Turkey’s Veto of Nordic NATO Bid Avoided? 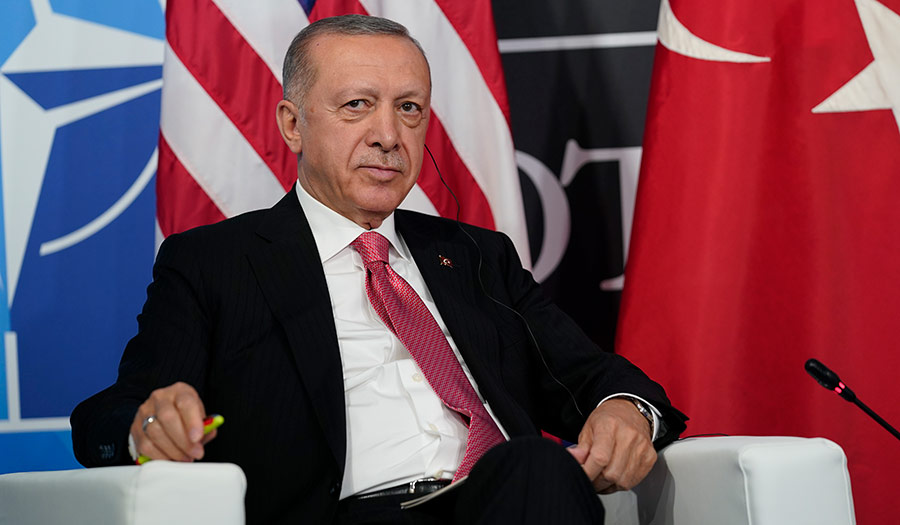 ISTANBUL (AP) – When the leaders of Finland, Sweden and Turkey met with NATO’s chief Tuesday, the potential for progress was hard to predict. Some remained pessimistic the meeting would lessen Turkey’s objections to the Nordic pair’s historic request to join NATO.

The government in Ankara had indicated for weeks that as an existing member of the Western military alliance, it would use its veto to prevent Sweden and Finland’s applications unless its demands were met. Turkey argued the two countries were lax on groups it considers to be national security threats.

Nearly three hours into Tuesday’s talks and with no word of an agreement, journalists were invited to witness the nations’ foreign ministers sign a joint memorandum. The officials declined to answer questions, but Finland’s president tweeted there was a deal. NATO Secretary-General Jens Stoltenberg confirmed the news about 20 minutes later and disclosed details of the memorandum.

What Does the Memorandum Say?

The 10-article memorandum addresses all of Turkey’s objections and promises to establish a permanent mechanism to monitor implementation.

The agreement was announced hours before the opening of a NATO summit in Madrid that aims to send a strong message of support to Kyiv and condemnation of Russia for its invasion of Ukraine.

Most significantly, Finland and Sweden promised “to not provide support” to the Syrian Kurdish YPG militia that Ankara considers an extension of the Kurdistan Workers’ Party. The group, known by its acronym PKK, has waged a decades-long Kurdish insurgency inside Turkey.

By signing the agreement, the two Nordic countries “confirm” that the PKK is a terror organization. It is already listed as such by the United States and the European Union, to which Sweden and Finland belong.

The would-be NATO members also promised to interrupt the financing and recruitment activities of PKK and affiliated groups. In addition, they pledged not to support the network of exiled Turkish cleric Fethullah Gulen. Turkey calls the network FETO and designates it as another terror group.

Turkey has blamed Mr. Gulen, a former ally of President Recep Tayyip Erdogan who lives in the United States, for a deadly 2016 coup attempt and accuses him of infiltrating state institutions with his followers. Mr. Gulen denies the accusations.

Finland and Sweden also agreed to address Turkey’s outstanding extradition requests for people Turkey deems terrorists, saying they would do so in accordance with the European Convention on Extradition.

Finally, the two countries agreed to lift an arms embargo they imposed on Turkey in 2019 after Turkey’s military operation against the YPG in Syria.

What Did Turkey Get, and What Did It Concede On?

“The memorandum was the price that had to be paid for the weird style of dealings with Turkish President Recep Tayyip Erdogan that at the same time represents typical behavior to Turkey,” the Finnish newspaper said.

While arguing against making Sweden and Finland NATO members, Mr. Erdogan showed videos and photographs of PKK demonstrations in Sweden as evidence of his claim of Swedish indifference to terrorism.

Asli Aydintasbas, a senior fellow at the European Council on Foreign Relations, says Mr. Erdogan’s rhetoric and negotiation style create the feeling he is ready to walk away from negotiations, but the president is just as often “pragmatic” about knowing when to take a good deal.

“Turkey didn’t get all that it wanted, and certainly Sweden did not, but that’s the art of diplomacy,” she said.

She noted that while the agreement lists the groups Turkey sees as threats, especially the YPG, it also states that Sweden would follow its own due process for extradition.

It would have been “disastrous” if Turkey had dragged on the negotiations or vetoed NATO’s expansion, Ms. Aydintasbas said, “opening a can of worms, including member states questioning Turkey’s place in NATO.”

“It’s a huge moment of celebration for Western unity, and for Turkey to be left out of that as a spoiler would have prompted questions about Turkey’s long-term commitment to NATO,” she said.

Ms. Aydintasbas thinks Turkey might have wanted stronger wording as well as more U.S. involvement in order to expedite its requests from Washington, which include new F-16 fighter jets.

A senior U.S. administration official said Tuesday that President Joe Biden decided to keep the U.S. from being a party to the negotiations or put in a position that would bolster Turkish demands. The official said Turkey never asked the U.S. for anything as part of the talks with Sweden, Finland and Mr. Stoltenberg.

What’s the Response in Turkey?

Mr. Erdogan is gearing up for presidential and parliamentary elections in 2023 amid an economic crisis with skyrocketing inflation. His strong-arm tactics with the West are often seen as a way to increase nationalist support at home.

Turkish media, which mostly follow a pro-government editorial line, welcomed the NATO agreement. The Sabah newspaper hailed it as “President Erdogan’s Madrid Victory,” while the Hurriyet newspaper said Mr. Erdogan “spelled it out” to the Finnish and Swedish leaders.

One nationalist opposition leader, Meral Aksener, criticized the agreement Wednesday, saying it was a “concession” that would not erase PKK’s presence from Europe.

Sweden and Finland’s justice ministries have files from Turkey on 33 people with alleged links to PKK and FETO, Turkish Justice Minister Bekir Bozdag said Wednesday. “After this agreement, as the justice ministry, we will write to them again and remind them of this,” he said.

Finnish Foreign Minister Pekka Haavisto provided some insight into how the negotiations unfolded.

“All parties repeated their old positions and how they see the situation. And then after two hours, we thought maybe it’s not moving at all,” Mr. Haavisto said. “And then we had a coffee break, and as always during the coffee break, great ideas come up.”

What’s the Reaction in the Nordic Countries?

Mr. Haavisto said the difficulty in negotiations stemmed from the definition of terrorism and terrorist groups.

“Turkey has their own definition…and we couldn’t agree on that definition because it’s larger than international or EU definitions,” he said.

“Our red line is that we are not changing our legislation on any issues. We could not come to this kind of meeting and then agree to change the legislation. We are still following the Finnish laws,” the Finnish minister said.

Finland has a Kurdish community of about 15,000 people, while Sweden has a much larger Kurdish diaspora of about 100,000. The expats by no means include only supporters of the PKK and the YPG.

In recent years, the two countries reportedly took in Turks who were Gulen adherents after the Turkish government cracked down on his network through arrests and purges on civil servants.

Finnish President Sauli Niinisto stressed that Helsinki pointed out that the memorandum does not list the names of individuals.

“In the case of extraditions, we will adhere to our own legislation and international agreements. Ultimately, extradition is a legal discretion which politicians have no right to influence,” Mr. Niinisto said.

Swedish Prime Minister Magdalena Andersson told broadcaster SVT Wednesday that any extradition “will, of course, take place within the framework of national and international law.”

“We will never extradite Swedish citizens,” Ms. Andersson said. “If one doesn’t get involved in terrorism, one doesn’t have to worry.”

Amineh Kakabeveh, a former Kurdish fighter turned Swedish lawmaker whose support the government depends on for a majority in parliament, said Wednesday that “it is Ankara that has decided…not the Swedish Parliament. That is frightening.”

“Many, many people [in Sweden] are afraid,” she said.

Welat Nehri, chairman of the Kurdish association in Finland, is highly concerned about the memorandum and “what changes it may bring.”

“Turkey’s perception of terrorism differs greatly from the way it is defined in Western law,” Mr. Nehri said in emailed comments to The Associated Press. “In Turkey, anyone who criticizes Erdogan’s actions and doesn’t act within the laws he has set is classified as a terrorist.”