This website requires the use of Javascript to function correctly. Performance and usage will suffer if it remains disabled.
How to Enable Javascript
Explainer: Crime, Impunity Surge in Amazon’s Javari Valley 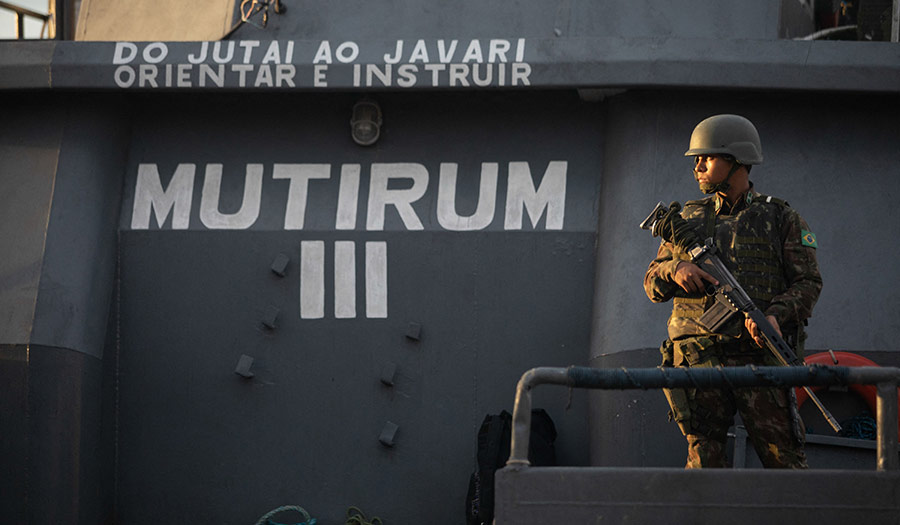 Joao Laet/AFP via Getty Images
A member of a rescue team tasked with the mission of finding British missing journalist Dom Philipps and Brazilian indigenous expert Bruno Pereira navigates the Itaguai river, in the Javari valley in Brazil (June 9, 2022).

ATALAIA DO NORTE, Brazil (AP) – The Amazon region’s Javari Valley, where a British journalist and an Indigenous affairs official are missing, is Brazil’s second-largest Indigenous territory and sits in an isolated area bordering Peru and Colombia. Crime there is rife and government oversight scant, adding to fears about the duo’s whereabouts and condition.

Reporter Dom Phillips and Indigenous expert Bruno Pereira disappeared in an area that has seen violent conflicts between fisherman, poachers and government agents. Violence has grown as drug trafficking gangs battle for control of waterways to ship cocaine.

The Javari Valley has been the stage for decades-long tension between Indigenous tribes and descendants of rubber tappers who live in dozens of communities along the region’s riverbanks.

Despite fierce resistance from the local non-Indigenous population, the federal government in 2001 created the Javari Valley Indigenous Territory, aiming to protect an area about the size of Portugal. Non-Indigenous communities just outside the newly established protected land had historically fished within it, and were no longer allowed. Since then, tensions have only grown.

The government’s Indigenous agency, known as FUNAI, established a permanent base at the strategic point where the Itui and the Itaquai rivers meet. There have been shootouts in recent years between officials and invaders, mostly fishermen. Mr. Pereira was previously the head of FUNAI’s bureau there.

“To this day, the locals don’t accept that they can’t fish, hunt or cut wood there,” Armando Soares Filho, a retired FUNAI official who was in charge of monitoring the area’s uncontacted tribes between 2003 and 2005, told The Associated Press. “Colombians and Peruvians also considered the area as a reserve for them to take whatever they want.”

Demand for fish in the region has increased as populations grow in Brazilian city of Tabatinga and Colombia’s Leticia. And as fish stocks became scarce in the Amazon River, the Javari Valley has become an even more coveted resource. Foreign tourists to Leticia are likely to eat fish caught illegally.

The past decade has seen a surge of coca crops planted in Peru, where law enforcement is even scarcer than on the Brazilian side of the border.

Traffickers process coca to make cocaine in Peru then send it through Brazil’s sparsely populated Javari Valley and Amazon River. It is then distributed among major cities of the region, and from there to other Brazilian cities or to Europe.

For years, the local Family of the North gang, the Sao Paulo-based First Command of the Capital and Rio de Janeiro-based Red Command fought for control of Amazonas. Since 2020, the latter has become dominant.

Amazonas is now Brazil’s most violent state per capita, after a 54 percent increase in the number of murders last year, according to a study by news website G1, the nonprofit Brazilian Forum of Public Security and the University of Sao Paulo.

Eleven Indigenous groups live in voluntary isolation within the Javari Valley, the country’s biggest concentration of them—about 6,000 people in all. FUNAI is legally obliged to protect them.

Brazilian law says contact with isolated tribes is only permitted as a last resort to preserve their lives. Many members of these tribes or their ancestors have been traumatized by contact with outsiders, who spread disease or sowed violence.

Mr. Pereira led one of these rare missions to reach an uncontacted Indigenous population there in March 2019 shortly after President Jair Bolsonaro took office and weeks before he went on leave from FUNAI.

Mr. Pereira and another 22 men were sent in to find a group of the Korubo Indigenous community and reunite them with relatives, arguing at the time it was necessary to prevent confrontation with another Indigenous group in the region. The efforts were successful.

FUNAI and the army are the only government authorities present in the Javari area. Almost two years ago, a FUNAI employee was shot dead in Tabatinga, the region’s largest city. The crime was never solved, which locals say has contributed to a growing sense of impunity.

Fate of Phillips and Pereira

It remains unclear what became of Mr. Phillips and Mr. Pereira, and authorities have begun investigating. Mr. Pereira is an ally to Indigenous movements but divisive among others in the area, as he had often led operations to seize fish, turtles, turtle eggs and other illegally extracted animal products.

Since taking leave from FUNAI, Mr. Pereira has been helping Javari’s local Indigenous association, comprised of several ethnicities, organize an independent surveillance network to locate and expel invaders—be they illegal fishermen, loggers, traffickers or religious missionaries. Mr. Pereira had received a steady stream of threats for his work, and traveled with a gun. Mr. Phillips joined him on the most recent trip as part of research for a book on Amazon conservation.

The pair was traveling the Itaquai River, which is the primary access route to the Javari Valley and whose banks are home to dozens of non-Indigenous families. Boat traffic is light but regular, with at least several craft passing each day, primarily small canoes powered by low-power outboard motors.

So it is unlikely Mr. Pereira, who had vast experience in the region, would have become lost or that a mechanical problem would have forced the pair to seek overland passage. Locals have speculated that they may have been ambushed.