This website requires the use of Javascript to function correctly. Performance and usage will suffer if it remains disabled.
How to Enable Javascript
China, Cambodia Break Ground on Port, Dismiss U.S. Concerns 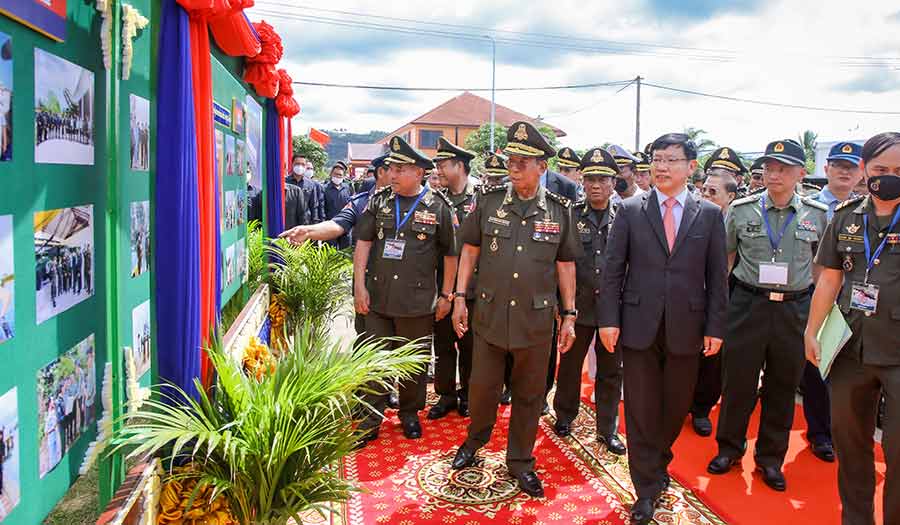 Cambodian Defense Minister Tea Banh, Chinese Ambassador to Cambodia Wang Wentian and other officials donned white gloves before turning over shovels full of dirt to launch the official “modernization” of the Ream Naval Base, which will include a dry dock for ship repairs, an extended pier, a hospital, a workshop and a “reception building.”

Longtime authoritarian leader Hun Sen in 2019 reportedly granted China the right to set up a military base at Ream, but has long denied that, saying Cambodia’s Constitution prohibits foreign military facilities.

Dredging is already underway to allow larger ships to use the port. Tea Banh told guests, including the U.S. defense attaché, that it would still only be able to accommodate ships of up to 5,000 tons displacement—an improvement from the current 1,000 tons but too shallow for all but the smallest of naval ships.

“Please don’t be too worried about this Ream base,” Tea Banh said, speaking in front of a sign proclaiming the project is being funded by “grant aid from the People’s Republic of China.”

“This port is too small and even after upgrading it can’t be a port that would threaten any countries,” he said.

Tea Banh said he invited the U.S. and other foreign representatives to the base so they could see for themselves “there is nothing here,” though he added that once construction is complete the facility will become a restricted military zone with no access for foreign nations.

“The U.S. and countries in the region have expressed concern about the lack of transparency on the intent, nature, and scope of this project as well as the role the PRC military is playing in its construction and in post-construction use of the facility,” embassy spokesperson Stephanie Arzate said in an email to The Associated Press.

Ream faces the Gulf of Thailand, adjacent to the South China Sea, where China has aggressively asserted its claim to virtually the entire strategic waterway. The U.S. has refused to recognize China’s sweeping claim and routinely conducts military maneuvers there to reinforce that they are international waters.

Tea Banh said the port project is expected to take two years to complete. He did not say how much it would cost, but China has given Cambodia hundreds of millions of dollars in grants in recent years for infrastructure projects.

Chinese Ambassador Wang said the construction will follow a plan agreed upon by Hun Sen and Chinese President Xi Jinping earlier this year to “further promote the building of a community with a shared future with strategic significance.”

“China and Cambodia have become ironclad brothers, economical with words but generous in action, treating each other with all sincerity and standing side by side at challenging times,” he said, according to an English translation of his remarks provided by the Chinese delegation.

The U.S. in November sanctioned two senior Cambodian defense officials over allegations of graft connected to construction financing at the Ream base, and Mr. Wang lashed out at the move, without mentioning the United States by name.

“Some countries keep smearing legitimate exchanges and cooperation between China and Cambodia and arbitrarily impose unilateral sanctions on Cambodia under the false subterfuge of ‘democracy’ and ‘human rights,’ blatantly interfering in Cambodia’s internal affairs through ‘long-arm jurisdiction,’” he said. “We firmly oppose all these misbehaviors.”

He said when completed, the base will be a monument to “the ironclad friendship and cooperation between the two militaries” of China and Cambodia.

China only operates one acknowledged foreign military base, in the impoverished but strategically important Horn of Africa nation of Djibouti, but many believe that its People’s Liberation Army is busy establishing an overseas military network, even if it does not use the term “base.”

Beijing recently signed a security agreement with the Solomon Islands that has raised fears of a possible Chinese outpost in the Pacific, and it has reached out to multiple other island nations in the region.

The U.S. has more foreign military bases than any other country, including multiple facilities in the Asia-Pacific region.