This website requires the use of Javascript to function correctly. Performance and usage will suffer if it remains disabled.
How to Enable Javascript
Four Months after Tornado, Kentucky Focuses on Rebuilding 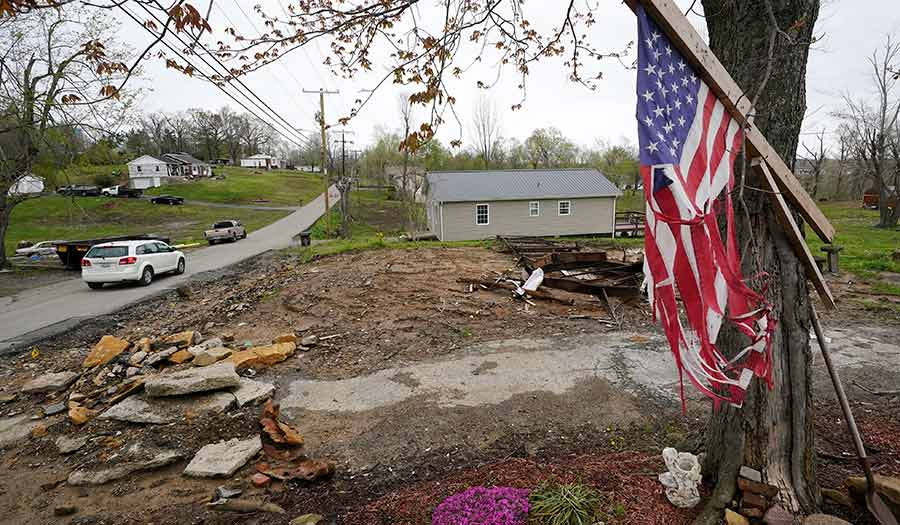 AP/Mark Humphrey
A flag hangs near the remains of a home destroyed in a December 10 tornado (April 21, 2022). Four months after the massive tornado tore through the state, hundreds of Kentuckians are arduously reconstructing their pre-storm existence.

Those gatherings ended the night of December 10, when a massive tornado obliterated their Dawson Springs house, trapping Chris Bullock, 17-year-old son Stevie and miniature poodle Dewey under a crumbled brick wall in the basement. Her husband pulled them from the rubble with minor injuries, but the house where she and her family lived for 26 years was gone.

“There were things we were never able to find,” Mrs. Bullock told The Associated Press recently. “Our neighbor’s dryer was in our yard. We found our ketchup but we couldn’t find our refrigerator.”

Four months after the tornado upended her family’s lives, Chris Bullock and hundreds of other Kentuckians are arduously reconstructing their pre-storm existence. Thanks to a vast network of municipal workers, contractors, churches, charities and volunteers, communities like Dawson Springs, Mayfield and Bowling Green are edging toward recovery.

The storm system that spawned the deadly tornado tore through a handful of states. The National Weather Service recorded 41 tornadoes on December 10 and 11, including 16 in Tennessee and eight in Kentucky. Eighty-one people died in Kentucky alone, state officials said. Thousands found shelter with relatives and friends, or in emergency facilities, hotels and state parks.

In Mayfield, a candle factory, a nursing home and government buildings were destroyed. Homes were ripped from foundations and splintered by fierce winds. Crews worked day and night to clear debris and restore power.

Audible evidence of rebuilding in Mayfield has been difficult to miss: the cracking and crashing of excavators breaking apart wood and glass, the beep-beep-beep of heavy machinery reversing, the popping of roofers’ nail guns.

“These are towns that have almost been wiped off the map,” Mr. Beshear said. “We will continue to be concerned about getting people back on their feet and concerned about not losing the population of these towns.”

Some have moved to more permanent shelter, including travel trailers, the governor said. In Graves County, tiny homes were approved for displaced residents, and several larger homes are being built in Mayfield, emergency management Director Tracy Warner said.

“We really hold the future of Mayfield and Graves County in our hands,” Ms. Warner said. “And that is scary, yet exciting.”

Although there’s cause for optimism, progress remains slow in places. In Dawson Springs, where Mrs. Bullock and her family now live in a camper, the 54-year-old registered nurse said she has seen just a few houses being rebuilt, and some friends say they will not stay.

Mrs. Bullock and her husband had paid off their home but didn’t have insurance. A disaster-response charity is helping them build a new house on their property, and Mrs. Bullock hopes to see a day when their family gatherings resume.

“Sundays were fun days…I just want to have that again,” she said.

Mrs. Bullock and her husband thought briefly about leaving Dawson Springs or finding an existing home rather than rebuild on their property, “but we lived in that house for 26 years and we raised five children there.”

“It’s just home,” she said. “It just didn’t feel right to be anywhere else.”