This website requires the use of Javascript to function correctly. Performance and usage will suffer if it remains disabled.
How to Enable Javascript
Mexican Cartels Swap Arms for Cocaine, Fueling Colombia Violence 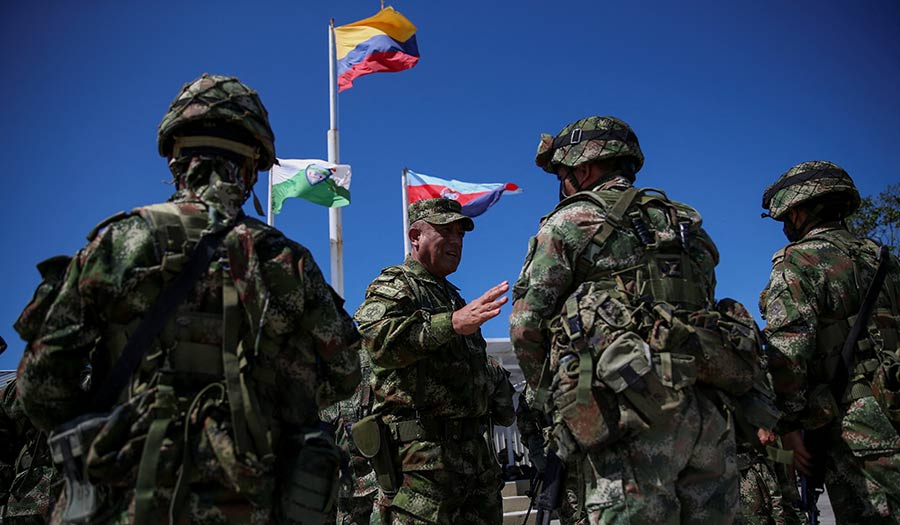 Reuters/Luisa Gonzalez
Soldiers form up upon the arrival of the commander of the Colombian Armed Forces, General Luis Fernando Navarro, at a military base in Tumaco, Colombia (Dec. 13, 2021).

BOGOTA (Reuters) – Mexican drug cartels appear to be shipping high-powered weapons to Colombia to purchase shipments of cocaine, a trade Colombian authorities say is fueling the deadly struggle between rival traffickers for control of the nation’s drug routes.

Among the weapons popping up in traffickers’ arsenals is the Belgium-made FN Five-seveN pistol, sources said. Nicknamed the “cop killer,” the 5.7-caliber weapon can penetrate bullet-proof vests.

Most of the 1,478 long arms confiscated from Colombian armed groups in 2020 and 2021 were foreign-made and imported clandestinely, the police say, along the same smuggling routes used to get drugs out.

Mexican drug gangs have easy access to guns purchased in the United States and long-term business relationships with Colombian armed groups, from whom they have purchased cocaine for decades, Colombian authorities said.

Now cartel emissaries are increasingly paying for shipments of cocaine with guns, authorities say, in part to avoid the need to move large quantities of cash across borders.

The potent firepower of the cartel-supplied arsenal has potential implications for Colombia’s security. Heavy arms in the hands of criminals put law enforcement at risk and could further complicate the troubled implementation of a 2016 peace deal between Bogota and the Revolutionary Armed Forces of Colombia (FARC) rebels.

Last year 148 members of the armed forces and the national police were killed in Colombia, the highest figure in six years and a 57 percent increase from 2020, according to figures from the Ministry of Defense.

“What illegal armed groups in Colombia are doing is using the Mexicans to equal and exceed the armed forces of the state in terms of weaponry,” an official at the police’s Anti-Terrorism and Arms Tracing Information Center (CIARA) said.

“In the future, that could have serious implications, like an increase in hostilities,” according to the official, who said armed groups may use the weapons not only against law enforcement but in battles with each other.

The agency authorized the person to speak to Reuters on the condition they not be identified.

The Colombian police say they have a permanent dialogue with their U.S. and Mexican counterparts on keeping weapons out of drug traffickers’ hands.

The U.S. Drug Enforcement Administration (DEA) declined to comment, while the Mexican government did not respond to Reuters questions.

Colombian authorities say the battle for control of their country’s drug trade is waged between former FARC members who reject the peace accord; guerrillas from the still-active National Liberation Army (ELN); and members of a plethora of criminal syndicates, including the Clan del Golfo, Colombia’s largest cartel.

Though FARC dissidents and the ELN espouse some of the same Marxist ideals, and they occasionally allied against the government during the height of the civil war, they now regularly fight each other and rival crime gangs to dominate lucrative drug routes, security officials said.

Law enforcement encounters with these groups are turning up powerful weapons.

A similar haul was found in a different FARC dissident camp in the southern jungle province of Caqueta in 2019, according to the army: a M60 machine gun, an AR-15 rifle with an added scope for use by a sniper, and a dozen assault rifles, including M4s and M16s.

Authorities said they believe such guns are supplied by Mexico’s Sinaloa, Zeta and Jalisco New Generation cartels, all of which have emissaries on Colombian soil.

Their representatives are present in 11 of Colombia’s 32 provinces, according to a 2021 police intelligence report seen by Reuters.

The Sinaloa cartel, once headed by jailed kingpin Joaquin “El Chapo” Guzman, has the most extensive geographic reach and deepest relationships with Colombian armed groups, the report said.

Some 55 Mexicans have been accused or convicted of drug trafficking offenses in Colombia in the last three years, according to the national prisons agency.

Colombia’s national police said last week they had captured Brian Donaciano Olguin, a Mexican national whom they allege served as the Sinaloa cartel’s most important go-between with FARC dissidents, calling his arrest the most important yet of a cartel emissary. Reuters was unable to contact Olguin or determine if he has legal counsel.

Mexico’s warring drug gangs have been bulking up on military-grade armaments at home, alarming officials in their own country.

Guns are a handy form of currency for gangsters.

“Every day [conducting] drug trafficking through cash payments gets more difficult. So now they are using different methods: a Mexican cartel might pay with sophisticated arms,” Murillo said.

Until the 1990s, Colombian guerrillas and paramilitaries largely used Russian-made AK-47s left over from wars in Central America, officials from the police and armed forces told Reuters.

As drug trafficking expanded and grew more lucrative, armed groups upgraded to newer AK-47s, U.S.-made M16s and AR-15s and Israeli-made Tavor assault rifles, police officials said. While some guns go for as little at $500 in Colombia, machine guns can fetch up to $5,000, they said.

The leaders of the Segunda Marquetalia, a group of FARC dissidents, have appeared repeatedly in YouTube videos armed with Tavor assault rifles likely supplied by Mexican cartels, according to the police’s CIARA center.

The flow of weapons southward comes as Colombian provinces like Norte de Santander, on the border with Venezuela, and Narino and Cauca, on the Pacific coast, have seen increases in coca production and associated violence by armed groups, despite U.S.-backed efforts by President Ivan Duque to slash narcotics production.

The Clan del Golfo alone moves some 22 tons of cocaine per month for clients including the Sinaloa and Jalisco cartels, according to Colombian police, who say the Clan’s gangster allies in Medellin have used the FN Five-seveN pistol in internal disputes.