This website requires the use of Javascript to function correctly. Performance and usage will suffer if it remains disabled.
How to Enable Javascript
U.S. Speeds Entry for Ukrainians as More Reach Mexico Border 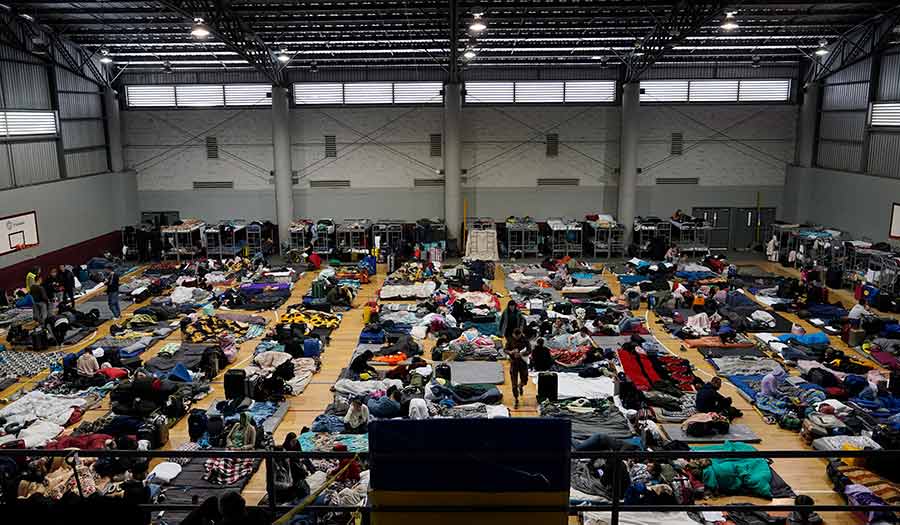 TIJUANA, Mexico (AP) – The United States has sharply increased the number of Ukrainians admitted to the country at the Mexican border as even more refugees fleeing the Russian invasion follow the same circuitous route.

A government recreation center in the Mexican border city of Tijuana grew to about 1,000 refugees Thursday, according to city officials. A canopy under which children played soccer only two days earlier was packed with people in rows of chairs and lined with bunk beds.

Tijuana has suddenly become a final stop for Ukrainians seeking refuge in the United States, where they are drawn by friends and families ready to host them and are convinced the U.S. will be a more suitable haven than Europe.

Word has spread rapidly on social media that a loose volunteer coalition, largely from Slavic churches in the western United States, is guiding hundreds of refugees daily from the Tijuana airport to temporary shelters, where they wait two to four days for U.S. officials to admit them on humanitarian parole. In less than two weeks, volunteers worked with U.S. and Mexican officials to build a remarkably efficient and expanding network to provide food, security, transportation and shelter.

U.S. officials began funneling Ukrainians Wednesday to a pedestrian crossing in San Diego that is temporarily closed to the public, hoping to process 578 people a day there with 24 officers, said Enrique Lucero, the city of Tijuana’s director of migrant affairs.

Vlad Fedoryshyn, a volunteer with access to a waiting list, said Thursday that the U.S. processed 620 Ukrainians over 24 hours, while about 800 others are arriving daily in Tijuana. Volunteers say the U.S. was previously admitting a few hundred Ukrainians daily.

A Tijuana camp that had held hundreds of Ukrainians near the busiest border crossing with the U.S. was dismantled. Refugees dispersed to the recreation center, churches and hotels to wait.

The volunteers, who wear blue and yellow badges to represent the Ukrainian flag but have no group name or leader, started a waiting list on notepads and later switched to a mobile app normally used to track church attendance. Ukrainians are told to report to a U.S. border crossing as their numbers approach, a system organizers liken to waiting for a restaurant table.

“We feel so lucky, so blessed,” said Tatiana Bondarenko, who traveled through Moldova, Romania, Austria and Mexico before arriving in San Diego with her husband and children, ages 8, 12, and 15. Her final destination was Sacramento, California, to live with her mother, who she had not seen in 15 years.

Another Ukrainian family posed nearby for photos under a U.S. Customs and Border Protection sign at San Diego’s San Ysidro port of entry, the busiest crossing between the U.S. and Mexico. Volunteers under a blue canopy offered snacks while refugees waited for family to pick them up or for buses to take them to a nearby church.

At the Tijuana airport, weary travelers who enter Mexico as tourists in Mexico City or Cancun are directed to a makeshift lounge in the terminal with a sign in black marker that reads, “Only for Ukrainian Refugees.” It is the only place to register to enter the U.S.

The waiting list stood at 973 families or single adults Tuesday.

“We realized we had a problem that the government wasn’t going to solve, so we solved it,” said Phil Metzger, pastor of Calvary Church in the San Diego suburb of Chula Vista, where about 75 members host Ukrainian families and another 100 refugees sleep on air mattresses and pews.

Mr. Metzger, whose pastoral work has taken him to Ukraine and Hungary, calls the operation “duct tape and glue,” but refugees prefer it to overwhelmed European countries, where millions of Ukrainians have settled.

The Biden administration has said it will accept up to 100,000 Ukrainians, but Mexico is the only route producing big numbers. Appointments at U.S. consulates in Europe are scarce, and refugee resettlement takes time.

The administration paroled more than 76,000 Afghans through U.S. airports in response to the departure of American troops last year, but nothing similar is afoot for Ukrainians. Parole, which grants temporary protection from deportation, is generally given for two years for Afghans and one year for Ukrainians.

Oksana Dugnyk, 36, hesitated to leave her home in Bucha but acquiesced to her husband’s wishes before Russian troops invaded the town and left behind streets strewn with corpses. The couple worried about violence in Mexico with three young children, but the robust volunteer presence in Tijuana reassured them, and a friend in Ohio agreed to host them.

“We have food. We have a place to stay,” Dugnyk said a day after arriving at the Tijuana recreation center, where hundreds slept on a basketball court. “We hope everything will be fine.”

Alerted by text message or social media, Ukrainians are summoned to the border crossing as their numbers near.

The arrival of Ukrainians comes as the Biden administration prepares for much larger numbers when pandemic-related asylum limits for all nationalities end May 23. Since March 2020, the U.S. has used Title 42 authority, named for a 1944 public health law, to suspend rights to seek asylum under U.S. law and international treaty.

Mr. Metzger, the Chula Vista pastor, said his church cannot long continue its 24-hour-a-day pace helping refugees, and he suspects U.S. authorities will not adopt what volunteers have done.

“If you make something go smooth, then everybody’s going to come,” he said. “We’re making it so easy. Eventually I’m sure they’ll say, ‘No, we’re done.’”