This website requires the use of Javascript to function correctly. Performance and usage will suffer if it remains disabled.
How to Enable Javascript
Not ‘Your Mother’s Spring Break’: Miami Beach Shootings Draws Curfew, Concern 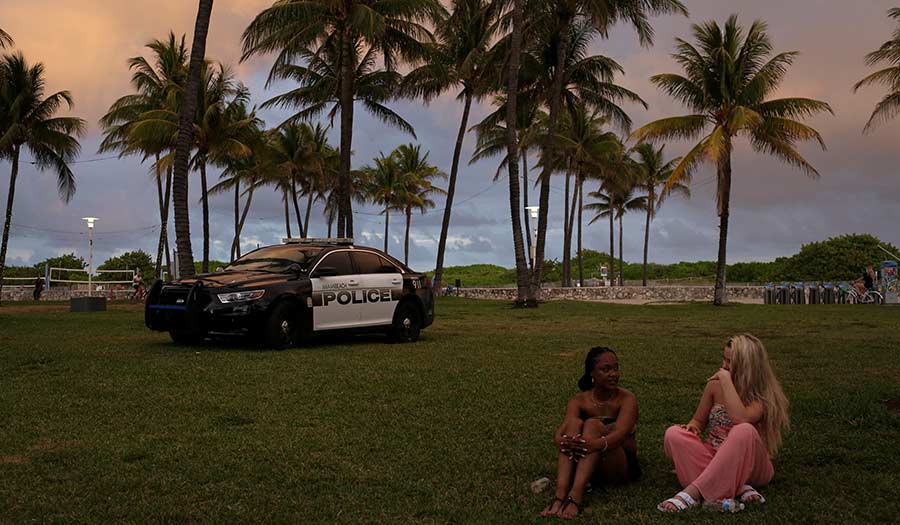 Reuters/Marco Bello
A police vehicle is seen next to people on spring break ahead of an 8 p.m. curfew imposed by local authorities, in Miami Beach, Florida (March 27, 2021).

Thousands of college students and other young people gather annually in Miami Beach for spring break, and this is the second year in a row that officials for the South Florida city have declared a state of emergency in this famed partying spot.

The mayor said about 100 guns have been seized over the past four weeks, and several police officers have been injured while controlling the crowds.

“We can’t endure this anymore. We just simply can’t,” Mr. Gelber said. “This isn’t your father or your mother’s spring break. This is something wholly different.”

Mr. Gelber noted that the five people were shot over the weekend despite 371 police officers being deployed.

Three people were wounded early Sunday on a street crowded with spring breakers in the city’s South Beach neighborhood, police said. Two victims wounded at the scene were taken to a hospital, while doctors at another hospital reported a third person arrived there with a gunshot wound. All were expected to survive.

Early Monday, officers were patrolling about a block from the Sunday morning shooting site when they heard gunshots, police said. The officers found two women with gunshot wounds. Police said their wounds were not life-threatening.

At the urging of some residents, city officials have been working in recent years to crack down on unruly behavior in South Beach. But efforts to curb the excessive drinking and violence have raised complaints about racism, classism and business practices.