This website requires the use of Javascript to function correctly. Performance and usage will suffer if it remains disabled.
How to Enable Javascript
A Green Island Turns Red: Madagascar Struggles Through Long Drought 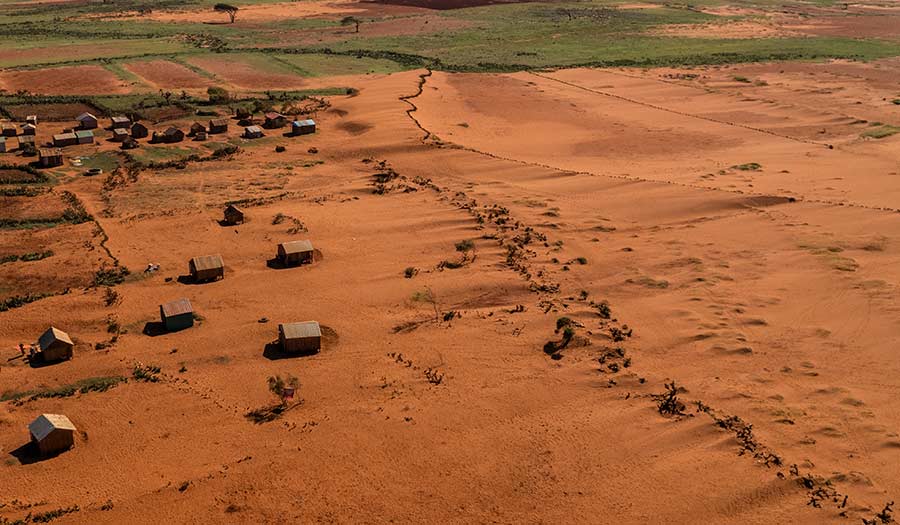 Reuters/Alkis Konstantinidis
Sand begins to surround houses close to the town of Ambovombe, Madagascar (Feb. 15, 2022). Four years of drought, along with deforestation caused by people burning or cutting down trees to make charcoal or to open up land for farming, have transformed the area into a dust bowl.

Anjeky Beanatara, Madagascar (Reuters) – With precious few trees left to slow the wind in this once fertile corner of southern Madagascar, red sand is blowing everywhere: onto fields, villages and roads, and into the eyes of children waiting for food aid parcels.

Four years of drought, the worst in decades, along with deforestation caused by people burning or cutting down trees to make charcoal or to open up land for farming, have transformed the area into a dust bowl.

“There’s nothing to harvest. That’s why we have nothing to eat and we’re starving,” said mother-of-seven Tarira, standing at a remote World Food Program (WFP) post near Anjeky Beanatara, where children are checked for signs of malnutrition and given food.

More than a million people in southern Madagascar currently need food handouts from the WFP, a United Nations agency.

Tarira had brought her four-year-old son Avoraza, who has been struggling to put on weight, to collect sachets of a peanut-based product known as Plumpy, used to treat malnourished children.

Like many others in the region, Tarira and her family have sometimes been reduced to eating a type of cactus known locally as raketa, which grows wild but provides little nutritional value and gives stomach pains, she said.

The world’s fourth largest island and one of its most diverse ecosystems, with thousands of endemic species of plants and animals such as lemurs, Madagascar projects the image of a lush natural paradise. But in parts of it, such as its far southern regions, the reality on the ground has changed.

“We used to call Madagascar the green island, but sadly now it is more of a red island,” said Soja Lahimaro Tsimandilatse, governor of the southern Androy region.

The food crisis in the south built up over a period of years and has interconnected causes including drought, deforestation, environmental damage, poverty, COVID-19 and population growth, according to local authorities and aid organizations.

Theodore Mbainaissem, who runs WFP operations in the worst-hit areas in southern Madagascar, said once-regular weather patterns had changed beyond recognition in recent years and elders in the villages could no longer figure out the best time to plant or harvest.

Mr. Mbainaissem said that, after months of intervention by the WFP, other aid organizations and the local authorities, the worst of the food crisis was over. He said rates of severe malnutrition among children had dropped from about 30 percent a few months ago to about 5 percent now.

“When you look in the villages, you see children running left and right. That wasn’t the case before,” he said.

Communities and aid groups are already trying to move past the emergency phase and focus on forward-looking projects, such as a large-scale effort in the coastal town of Faux Cap to stabilize sand dunes by planting.

But in rural areas where people live in dire poverty, some of the trends that contributed to the crisis are still present.

For recently married Felix Fitiavantsoa, 20, who was burning down a wooded area to start cultivating it, the long-term consequences of deforestation were a secondary concern.

His urgent need was to grow food to feed his young wife, and his main worry was whether it would finally rain so he could get started.