This website requires the use of Javascript to function correctly. Performance and usage will suffer if it remains disabled.
How to Enable Javascript
Japan Marks 11 Years Since Quake, Tsunami, Nuclear Disaster 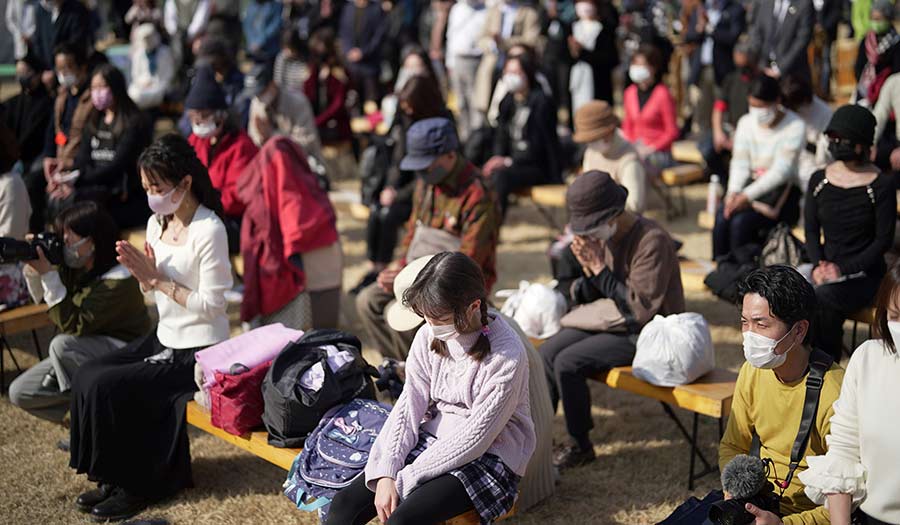 AP/Eugene Hoshiko
Visitors pray during a minute of silence for the victims of the March 11, 2011, earthquake and tsunami during a memorial event in Tokyo, Japan (March 11, 2022).

TOKYO (AP) – Japan on Friday paid tribute to the victims and renewed searches for those still missing from a massive earthquake and tsunami 11 years ago that also triggered a nuclear disaster in Fukushima where tens of thousands still cannot return home.

Some residents in the tsunami-hit northern prefectures of Iwate and Miyagi walked down to the coast or their memorable places to pray for their loved ones who were killed or washed away.

The earthquake and subsequent tsunami that slammed into the coastal Fukushima Daiichi nuclear plant destroyed its power and cooling functions, triggering meltdowns in three of its six reactors.

At a ceremony held by the Fukushima prefecture, Prime Minister Fumio Kishida offered his prayer for the tsunami and quake victims and renewed his pledge to support the ongoing reconstruction efforts in Fukushima.

“Recovery from the nuclear disaster requires long-term response,” he said, pledging that the government will provide support to improve the living environment for returning residents and to revitalize local industries.

Mr. Kishida traveled to Fukushima despite the government’s discontinuation of the state ceremony after the 10th anniversary last year.

In Natori, in the Miyagi prefecture, residents released colorful balloons carrying messages for their lost loved ones after the 2:46 p.m. moment of silence.

In Minamisoma, a Fukushima town where about 500 people were killed by the tsunami, uniformed police officers wearing rubber boots went down the coast and dug through the beach to search for the remains of the missing. Searches had been delayed in many parts of the Fukushima coast because of the radiation.

The areas contaminated with radioactive fallout and designated as unsafe for living initially covered 12 percent of the prefectural land, but after decontamination efforts, the no-go zone was reduced to just 2.4 percent. The government has also pushed safety campaigns to send former residents home, triggering concerns about possible cutbacks on support for voluntary evacuees.

At peak time, more than 160,000 people evacuated in and outside of Fukushima. About 33,000 of them are still unable to return home. Many of the evacuees have already resettled elsewhere, and many of the affected towns have seen their population shrink significantly over the past decade, Fukushima Governor Masao Uchibori said in his recent online speech.

In Futaba town, home to the Fukushima nuclear plant, a tiny area near its train station opened for registered residents to live on a trial basis before its full opening in June, but few of the town’s population of about 5,600 have returned so far.

“Many difficult challenges remain,” said Mr. Uchibori in his speech at the ceremony. He noted the many residents still in evacuation, contaminated water, the plant’s continued cleanup and decommissioning and measures against the impact from the planned release of treated radioactive water.

No-go zones still remain in some areas, and there are problems with radiation rumors while lessons from the disaster are somewhat fading, Mr. Uchibori said. “We solemnly promise in front of the souls of disaster victims to take challenges with all possible efforts to achieve the reconstruction, without giving up our hope.”

The government says the water’s controlled release spanning several decades is safe, but neighboring countries such as China and South Korea, as well as local residents, oppose the plan due to safety concern. Fishing communities are particularly concerned about rumors of the water further hurting the reputation of local fish.

TEPCO also faces a number of lawsuits from the disaster-hit residents seeking compensation for the loss of their homes and livelihoods, with recent Supreme Court decisions upholding their demands. A group of six young residents of Fukushima filed a damages suit in February against TEPCO seeking compensation for the thyroid cancer they attribute to radiation from the accident.

The government and Fukushima prefectural officials deny any link between their illnesses and radiation leaked from the Fukushima plant.