This website requires the use of Javascript to function correctly. Performance and usage will suffer if it remains disabled.
How to Enable Javascript
Explainer: What Is the Nord Stream 2 Pipeline?

Explainer: What Is the Nord Stream 2 Pipeline? 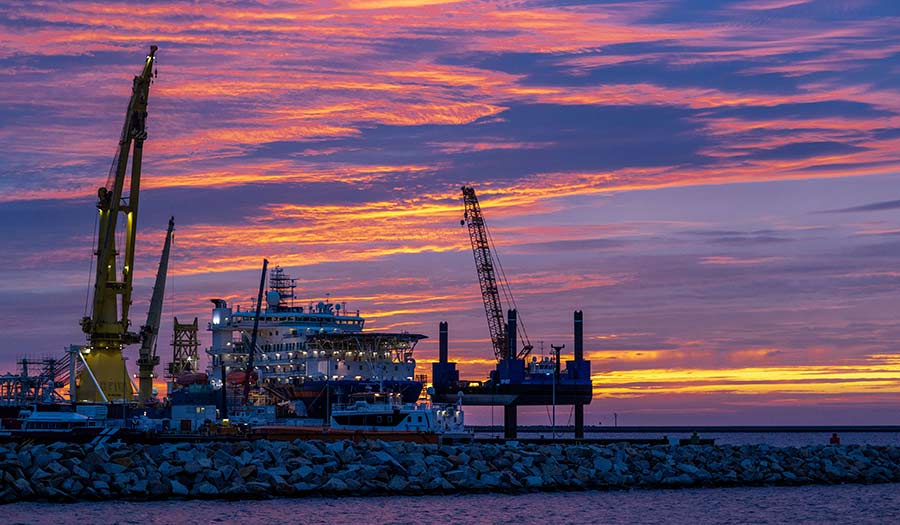 Jens Buettner/dpa via AP
The Russian pipe-laying ship ‘Akademik Tscherski,’ which is on deployment for the further construction of the Nord Stream 2 Baltic Sea pipeline, is moored at the port of Mukran on the island of Ruegen, Germany (Sept. 8, 2020).

FRANKFURT, Germany (AP) – German Chancellor Olaf Scholz has suspended the certification process for the Nord Stream 2 natural gas pipeline after Russia recognized separatist-held regions in eastern Ukraine, with the West fearing a full-scale invasion is next.

The undersea pipeline directly links Russian gas to Europe via Germany and is complete but not yet operating. It has become a major target as Western governments try to exert leverage on Russia to deter further military moves against its neighbor.

Here are key things to understand about the pipeline.

What is Nord Stream 2?

It is a 764-mile-long natural gas pipeline under the Baltic Sea, running from Russia to Germany’s Baltic coast.

It runs parallel to an earlier Nord Stream pipeline and would double its capacity, to 110 billion cubic meters of gas a year. It means Gazprom can send gas to Europe’s pipeline system without using existing pipelines running through Ukraine and Poland.

The pipeline has been filled with gas but had been awaiting approval by Germany and the European Commission.

How is Mr. Scholz blocking the pipeline?

Germany’s utility regulator was reviewing the pipeline for compliance with European regulations on fair competition. It’s that approval process that Mr. Scholz said Tuesday that he was suspending.

Germany was required to submit a report on how the pipeline would affect energy security, and Mr. Scholz said that report was being withdrawn.

Mr. Scholz, who took the helm in Germany in December, backed the project as finance minister for his predecessor, Angela Merkel, and his Social Democratic Party supported it. As Russia massed troops near Ukraine’s border, Mr. Scholz avoided referring to Nord Stream 2 specifically even as U.S. officials said it would not move forward if Russia invaded.

But Mr. Scholz warned that Russia would face “severe consequences” and that sanctions must be ready ahead of time. Germany had earlier agreed with the U.S. to act against Nord Stream 2 if Russia used gas as a weapon or attacked Ukraine.

The chancellor said Tuesday that Russia recognizing the independence of rebel-held areas in Ukraine marked a “serious break of international law” and that it was necessary to “send a clear signal to Moscow that such actions won’t remain without consequences.”

Why does Russia want the pipeline?

Nord Stream 2 would offer an alternative to Ukraine’s aging system that Gazprom says needs refurbishment, lower costs by saving transit fees paid to Ukraine, and avoid episodes like brief 2006 and 2009 gas cutoffs over price and payment disputes between Russia and Ukraine.

Europe is a key market for Gazprom, whose sales support the Russian government budget. Europe needs gas because it is replacing decommissioned coal and nuclear plants before renewable energy sources such as wind and solar are sufficiently built up.

Why is the U.S. against Nord Stream 2?

The White House was in “close consultations with Germany” and welcomed their announcement, press secretary Jen Psaki tweeted. She added that the Biden administration would be following with its own measures Tuesday.

The U.S., European NATO allies such as Poland, and Ukraine have opposed the project going back before the Biden administration, saying it increases Europe’s dependence on Russian gas and gives Russia the possibility of using gas as a geopolitical weapon. Europe imports most of its gas and gets roughly 40 percent of its supply from Russia.

The pipeline, which went forward under Ms. Merkel, has been an irritant in U.S.-German relations. Biden waived sanctions against the pipeline’s operator when it was almost complete in return for an agreement from Germany to take action against Russia if it used gas as a weapon or attacks Ukraine.

In Congress, Republicans and Democrats—in a rare bit of agreement—have long objected to Nord Stream 2.

No. Even before Mr. Scholz’s move, regulators made clear the approval process could not be completed in the first half of the year. That means the pipeline was not going to help meet heating and electricity needs this winter as the continent faces a gas shortage.

The winter shortage has continued to feed concerns about relying on Russian gas. Russia held back from short-term gas sales—even though it fulfilled long-term contracts with European customers—and failed to fill its underground storage in Europe.

Could Russia cut off gas to Europe in retaliation?

While Europe needs Russian gas, Gazprom also needs the European market. That interdependence is why many think Russia will not cut off supplies to Europe even if the Ukraine conflict escalates further, and Russian officials have underlined they have no intention to do that.

Meanwhile, the Ukraine crisis, on top of the winter shortage, is has already given European governments more reason to find their gas somewhere else, such as through liquefied gas brought by ship from the U.S., Algeria and other places.