This website requires the use of Javascript to function correctly. Performance and usage will suffer if it remains disabled.
How to Enable Javascript
‘Nobody Is Ready’: Many U.S. Cities Lack Resources to Chase $1 Trillion Infrastructure Windfall

‘Nobody Is Ready’: Many U.S. Cities Lack Resources to Chase $1 Trillion Infrastructure Windfall 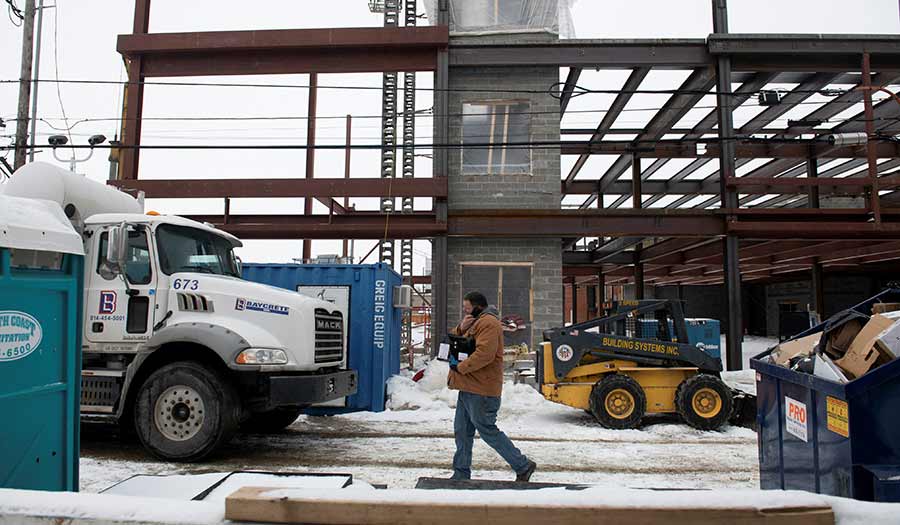 Reuters/Stephanie Strasburg
Workers finish the day at the site of new mixed-use construction in downtown Erie, Pennsylvania, where city leaders are hoping to get a piece of the $500 billion promised through President Biden’s infrastructure bill to continue their vision to revitalize their downtown and waterfront areas, moving the city forward from its industrial past (Feb. 8, 2022).

Reuters – Erie, Pennsylvania could use a facelift. The lakefront city of 100,000 has been adding jobs and businesses downtown, but it remains saddled with vestiges of its industrial past: abandoned factories, ugly concrete buildings, decaying houses.

Leaders have written a stack of development plans, but lack the money needed to turn them into reality.

It amounts to the largest U.S. public-works surge since the 1960s, but there is no guarantee those dollars will make it to Erie. Roughly half of the funds will flow through state governments, while the rest will be doled out on a competitive basis.

To win the money, local governments will have to apply for it—and after decades of belt tightening, many lack the bureaucratic muscle to do so.

“Nobody is ready because nobody has needed to be ready until now,” said Perry Wood, executive director of the Erie County Gaming Revenue Authority, which distributes gambling money for redevelopment projects.

Since the onset of the COVID-19 pandemic two years ago, local governments have shed 3.7 percent of their administrative jobs, according to the U.S. Labor Department.

Some have had trouble handling the $500 billion in COVID-19 aid that Washington has sent to local governments. One out of five communities in Michigan missed out on the initial round of federal coronavirus aid because they didn’t know how to fill out the paperwork, said Shanna Draheim of the Michigan Municipal League.

Many turn to outside experts. The city of Mason, Michigan has set aside up to $40,000 to hire a consultant to apply for funding to upgrade its sewer system—a substantial expense for a community of 8,300 people.

“It makes it very challenging for smaller communities to position themselves to be competitive,” city manager Deborah Stewart said.

Academic studies have found that federal homeless grants are more likely to go to communities that can show they will use the money effectively, rather than those that need it most.

That can favor cities which have the resources to navigate federal bureaucracy. In the past fiscal year, just 11 counties received 50 percent of the competitive grants awarded by the agencies that will handle most infrastructure spending, according to a Reuters review of federal data.

Experts say smaller cities might get boxed out in the scramble for infrastructure dollars. “It’s going to be overwhelming in many cases and could actually favor large, prosperous metropolitan areas,” said Bruce Katz, a Drexel University professor who is helping Erie seek infrastructure grants.

“It’s disingenuous to say, ‘We’ll give you the money if you figure your own stuff out,’” she said.

The Biden administration says it is working to reduce those barriers.

Many of the new competitive grant programs include carve-outs for “disadvantaged” communities that have suffered from poverty, pollution or racial discrimination. The administration also requires that at least 40 percent of its spending on clean energy and climate change benefit those areas. Matching-fund requirements can be waived in many cases, officials say.

In Erie, civic groups, governments and private businesses like Erie Insurance, the city’s largest employer, have developed a plan to win as many federal dollars as possible.

A first step is to hire more planners, grant writers and other bureaucrats, with local philanthropies covering the $11 million cost. That should help the region weather any dramatic events, such as another pandemic, in years to come, Ms. Wyrosdick said.

“The system that needs to be in place to compete for these federal dollars is the system that should have always been in place,” she said.