This website requires the use of Javascript to function correctly. Performance and usage will suffer if it remains disabled.
How to Enable Javascript
Explainer: Can the UN Do More than just Talk About Russia, Ukraine Crisis?

Explainer: Can the UN Do More than just Talk About Russia, Ukraine Crisis? 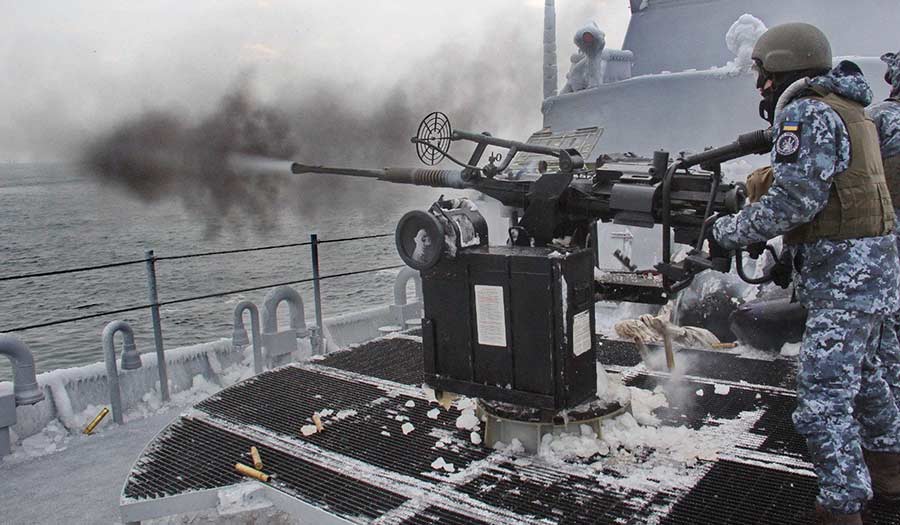 The Ukrainian Naval Forces/Handout via Reuters
Members of the Ukrainian Navy fire a gun during naval drills in the northwestern part of the Black Sea, Ukraine, in this handout picture released January 29, 2022.

United Nations (Reuters) – The UN Security Council is due to meet in public on Monday, at the request of the United States, to discuss Russia’s troop build-up on the border with Ukraine as international diplomacy aimed at easing tensions moves to the world body in New York.

The United States describes the meeting of the 15-member body as a chance for Russia to explain itself, while Russia signaled it could try and block it. Nine votes are needed for the meeting to proceed and Washington is “confident” it has sufficient support.

But aside from all members having the opportunity to air their views openly, there will be no action by the council—even if Russia were to invade Ukraine. A simple statement needs consensus support and Russia could veto any bid for a resolution.

Russia is one of five permanent, veto-wielding powers on the council along with the United States, France, Britain and China. The Security Council is charged with maintaining international peace and security. One day after the meeting, Russia is set to assume the council’s rotating presidency for February.

“The U.S. and its allies will use the UN as a political theater where they can publicly shame Russia in the event of war,” said Richard Gowan, UN director at Crisis Group, a think-tank.

“I fear that this will be just one more crisis, like the Ethiopian war and Burmese coup, that shows what little clout the UN carries in the real world,” he added.

What Happened with Crimea?

If Russia’s military escalates the crisis, diplomats and foreign policy analysts say diplomacy and action at the United Nations is likely to mirror what happened in 2014 after Russia annexed Ukraine’s Crimea region.

The Security Council has met dozens of times since then to discuss the Ukraine crisis. In March 2014, it voted on a U.S.-drafted resolution opposing a referendum on the status of Crimea and urging countries not to recognize it. It received 13 votes in favor, China abstained and Russia cast a veto.

Seeking to demonstrate Russia’s international isolation, Western countries then took a similar text to the 193-member General Assembly, which adopted a resolution declaring the referendum invalid. It received 100 votes in favor, 11 against and 58 abstentions, while two dozen countries didn’t vote.

General Assembly resolutions carry political weight but are not legally binding. Unlike the Security Council, no country has veto power in the General Assembly.

What Are Western Diplomats Doing?

So far, Western diplomacy at the United Nations during the latest military build-up has largely focused on trying to rally support—should they need it—among UN members by accusing Russia of undermining the UN Charter.

The Charter is the founding document of the United Nations, outlining its purposes and principles agreed in 1945.

“They impact every UN member state, and we must be prepared to stand together in unity and solidarity should Russia defy the shared values and principles that undergird our international system,” she said.

What Can Russia Do as Security Council President?

On Tuesday, Russia takes over the council’s rotating presidency for February. This is largely an administrative role, but does involve scheduling meetings, so some diplomats warn Russia could delay any attempts by council members to request another discussion on actions by Russia.

As things stand, the council is already due to discuss Ukraine on February 17, diplomats said. It is a regularly scheduled meeting on the Minsk agreements, which were endorsed by the council in 2015 and designed to end a separatist war by Russian-speakers in eastern Ukraine.

The General Assembly is also set to hold an annual discussion on “the situation in the temporarily occupied territories of Ukraine” on February 23.