This website requires the use of Javascript to function correctly. Performance and usage will suffer if it remains disabled.
How to Enable Javascript
World Remembers Holocaust as Antisemitism Rises in Pandemic 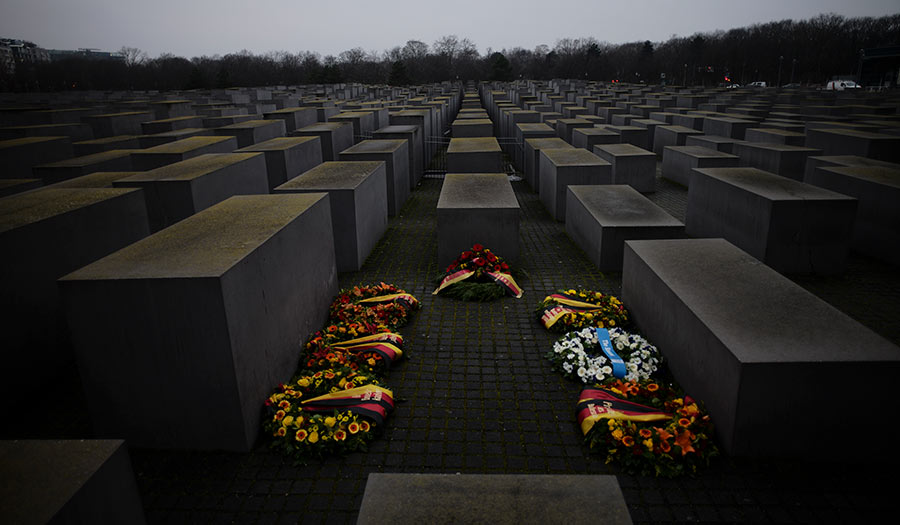 AP/Markus Schreiber
Wreaths placed at the Memorial to the Murdered Jews of Europe on the International Holocaust Remembrance Day in Berlin, Germany (Jan. 27, 2022).

WARSAW, Poland (AP) – Survivors recalled their agony to a world they fear is forgetting, Israel’s parliamentary speaker wept in the German parliament and politicians warned of a resurgence of antisemitism on Thursday’s International Holocaust Remembrance Day.

The day falls on the anniversary of the liberation by Soviet troops of Auschwitz-Birkenau, the most notorious of the death camps where Nazi Germany carried out its Final Solution seeking to murder the Jewish people of Europe.

At the memorial site in Poland, which was subjected to a brutal German occupation during World War II, a small number of survivors gathered in an auditorium. Attendance at the yearly event was sharply curtailed amid Europe’s coronavirus surge. Others joined online.

Nazi German forces killed 1.1 million people at Auschwitz, most of them Jews, but also Poles, Roma and others, and the site today stands as a powerful symbol of how hatred and indifference led to the Holocaust.

Halina Birenbaum, a 92-year-old Polish-born poet who lives in Israel, recalled her suffering remotely. She was 10 when the Germans invaded and occupied Poland in September 1939, and was 13 when she was taken to Auschwitz-Birkenau after being led out of the gas chamber of the Majdanek camp thanks to a malfunction.

“I saw masses of the powerful but arrogant army of Nazi Germany as they marched cruelly, victoriously, into the devastated and burning streets of Warsaw,” she recalled.

“The countless experiences of infinite suffering on the brink of death are already a distant, unimaginable story for new generations,” she said.

Commemorations everywhere took place amid a rise of antisemitism that gained traction during lockdowns as the coronavirus pandemic has exacerbated hatred online.

“Antisemitism is here—it isn’t just on the extreme fringe, not just among the eternally incorrigible and a few antisemitic trolls on the net,” she said. “It is a problem of our society—all of society.”

In recent days alone, a 12-year-old Jewish boy in Italy was attacked and subjected to antisemitic slurs while two men were punched in London.

British Prime Minister Boris Johnson said the London attack “is a terrible reminder, on Holocaust Memorial Day, that such prejudice is not consigned to history, but remains a very real problem in society.”

“Unfortunately, this cancer has reawakened and hatred of Jews is commonplace again in many countries in the world, including Germany,” she said.

About 6 million European Jews and millions of other people were killed by the Nazis and their collaborators. Some 1.5 million were children.

Israel’s parliamentary speaker, Mickey Levy, broke down in tears in the Bundestag while reciting the Jewish mourner’s prayer from a prayer book that belonged to a German Jewish boy who celebrated his bar mitzvah on the eve of Kristallnacht, an outburst of anti-Jewish violence in 1938.

Mr. Levy said that Israel and Germany experienced “an exceptional journey on the way to reconciliation and establishing relations and brave friendship between us.”

Gathered at the European Parliament, EU lawmakers listened to 100-year-old Holocaust survivor Margot Friedlander’s ordeal. She was arrested in 1944 and brought to Theresienstadt, now part of the Czech Republic. A year before, her mother and brother were deported to Auschwitz and killed.

“We must be vigilant and not look the other way as we did then,” she said. “Hatred, racism and antisemitism must not be the last word in history.”