This website requires the use of Javascript to function correctly. Performance and usage will suffer if it remains disabled.
How to Enable Javascript
U.S. Plans $50B Wildfire Fight Where Forests Meet Civilization 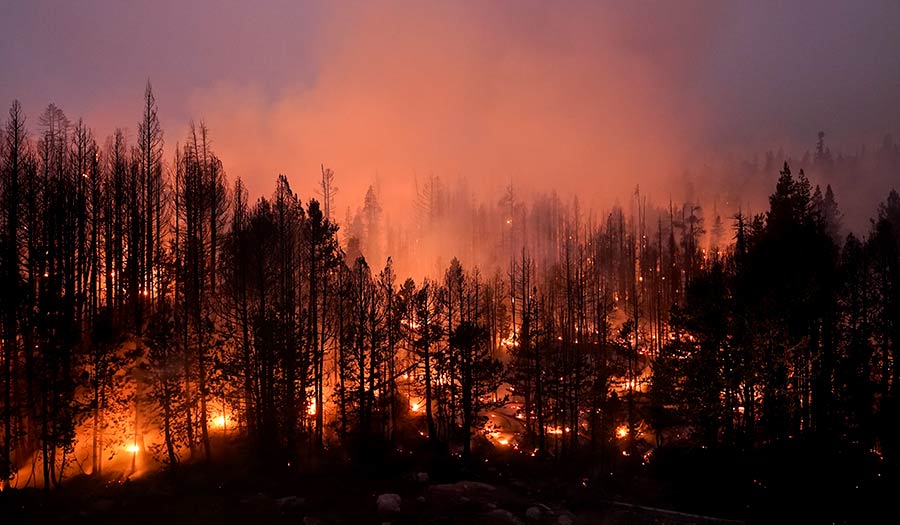 BILLINGS, Montana (AP) – The Biden administration said Tuesday it will significantly expand efforts to stave off catastrophic wildfires that have torched areas of the U.S. West by more aggressively thinning forests around “hot spots” where nature and neighborhoods collide.

Administration officials said they have crafted a $50 billion plan to more than double the use of controlled fires and logging to reduce trees and other vegetation that serves as tinder in the most at-risk areas. Only some of the work has funding so far.

Projects will begin this year, and the plan will focus on regions where out-of-control blazes have wiped out neighborhoods and sometimes entire communities—including California’s Sierra Nevada mountains, the east side of the Rocky Mountains in Colorado, and portions of Arizona, Oregon and Washington state. Homes keep getting built in fire-prone areas, even as conditions that stoke blazes get worse.

“You’re going to have forest fires. The question is how catastrophic do those fires have to be,” Agriculture Secretary Tom Vilsack told the Associated Press in an interview. “The time to act is now if we want to ultimately over time change the trajectory of these fires.”

Specific projects were not immediately released, and it is not clear who would pay for the full scope of work envisioned across almost 80,000 square miles—an area almost as large as Idaho. Much of that area is controlled by states, tribes or is privately owned.

Reaching that goal would require an estimated $20 billion over 10 years for work on national forests and $30 billion for work on other federal, state, tribal and private lands, said Vilsack spokesperson Kate Waters.

Mr. Vilsack acknowledged that the new effort will also require a “paradigm shift” within the U.S. Forest Service, from an agency devoted to stamping out fires, into one that uses what some Native Americans call “good fire” on forests and rangeland to prevent even larger blazes.

Forest Service planning documents indicate the work will focus on “hotspots” that make up only 10 percent of the fire-prone areas across the U.S. but account for 80 percent of risk to communities because of their population densities and locations.

Wildfire expert John Abatzoglou said lessening fire dangers on the amount of land envisioned under the administration’s plan is a “lofty goal” that represents even more acreage than burned over the past 10 years across the West. But Mr. Abatzoglou, a University of California Merced engineering professor, said the focus on wildfire hazards closest to communities makes sense.

“Our scorecard for fire should be about lives saved rather than acres that didn’t burn,” he said.

Dealing with western wildfires is becoming increasingly urgent as they get more destructive and intense. There have been rare winter blazes in recent weeks, including infernos in Montana and Colorado, where a wildfire on December 30 tore through a suburban area and destroyed more than 1,000 buildings, leaving one person dead and a second still missing.

For decades the primary approach to containing and extinguishing forest fires was to try to stamp them out. The efforts have been similar to massive, military-like campaigns, including planes, fleets of heavy equipment and thousands of firefighting personnel and support workers dispatched to the fire zones.

However, fires are a part of the natural cycle for most forests, so putting them out leaves stands of trees that do not burn surrounded by dead wood, underbrush and other highly flammable fuels—a worst-case scenario when blazes ignite.

Forests thinned near Lake Tahoe and its tourism gateway community of South Lake Tahoe were credited with slowing the advance of the massive Caldor Fire last summer that destroyed almost 800 homes and prompted evacuations of tens of thousands of residents and tourists.

A similar phenomenon played out during Oregon’s Bootleg fire last July, which burned more than 600 square miles but did less damage in forest that was thinned over the past decade.

“We know this works,” Mr. Vilsack said. “It’s removing some of the timber, in a very scientific and thoughtful way, so that at the end of the day fires don’t continue to hop from tree top to tree top, but eventually come to ground where we can put them out.”