This website requires the use of Javascript to function correctly. Performance and usage will suffer if it remains disabled.
How to Enable Javascript
Families Despair over Post-holiday Return to Remote Learning 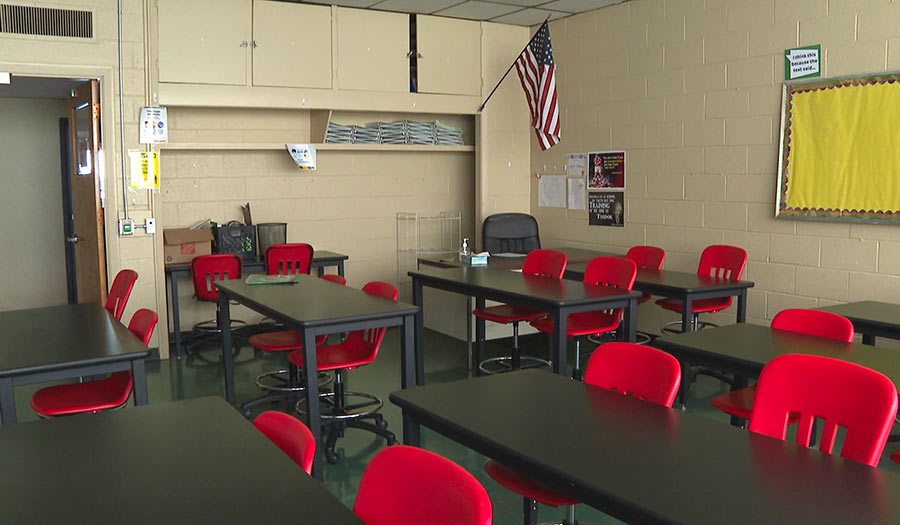 AP/Mike Householder
In this image made from video, an empty classroom is shown at David Ellis Academy in Detroit (Feb. 8, 2021). Facing a surge in COVID-19 cases, the Detroit Public Schools Community District joins a growing number of U.S. districts moving classes online.

Facing a surge in COVID-19 cases, the Detroit district this week joined a growing number of others in moving classes online after the winter break. The shift involving 50,000 students once again leaves parents juggling home and work schedules around the educational needs of their children.

A single parent who works more than 60 hours each week at two jobs, Ms. Peterson sometimes had to miss work to help her teenage son during more than a year of online learning.

“I will have to take time off, but I’m looking at how long this is going to last. You only get so many off days and so many paid time off days,” Ms. Peterson said Wednesday, a day after the district announced that students would resume classes at home with laptops through at least January 14.

The vast majority of U.S. districts appear to be returning to in-person learning, but other large school systems including those in Newark, New Jersey, Milwaukee and Cleveland have gone back to remote learning as infections soar and sideline staff members. Dozens of smaller districts have followed, including many around Detroit, Chicago and Washington.

The disruptions also raise alarms about risks to students. Long stretches of remote learning over the last two years have taken a toll, leaving many kids with academic and mental health setbacks that experts are still trying to understand.

President Joe Biden, who campaigned on a promise to reopen classrooms, is pressing schools to remain open. With vaccines and regular virus testing, his administration has said there is no reason to keep schools closed.

“Look, we have no reason to think at this point that omicron is worse for children than previous variants,” Mr. Biden told reporters on Tuesday. “We know that our kids can be safe when in school.”

But the reality for some districts is not so simple: Testing supplies have been scarce, and many districts face low vaccine uptake in their communities. In Detroit, just 44 percent of residents 5 and older have received a vaccine dose, compared with a statewide rate of 63 percent.

The closures are often driven by waves of teachers calling in sick. More than a third of Philadelphia’s 216 public schools have switched to remote learning through at least Friday, drawing an outcry from families that were given little time to prepare.

On Friday, Chicago students remained out of school for a third straight day after school leaders failed to reach an agreement with the teachers union over virus safety protocols. The union wants to revert to remote instruction because of the infection surge.

In Detroit, both Ms. Peterson and her son, Joshua Jackson, 16, are vaccinated. Joshua would rather stay in-person and said it was more difficult for him to focus in a virtual classroom.

“I feel like I learned less,” the high school junior said. “I’m worried that we won’t go back to class. They [the district] did it before and said it only would be a short while. It turned out to be the whole school year.”

Officials in districts that are returning to online instruction insist the move is only temporary, with most intending to go back to in-person classes within a week or two. As infections reach record levels in some areas, some parents say it is the right move.

Nicole Berry’s three children returned to Detroit classrooms last fall, but she has been keeping them home since she caught COVID-19 herself around Thanksgiving and got scared. Detroit gives families the option of full-time remote learning.

Ms. Berry, 48, juggles teaching them on her own while also working more than 40 hours per week.

“My children weren’t going back anyway. I’d already made the decision,” she said.

In Chicago, Jennifer Baez said she hopes the district will allow remote learning until the surge slows down. She and one of her sons got sick recently with COVID-19. She is not certain her kids will keep their masks on or that other precautions are in place.

Ms. Baez works remotely as a legal secretary. Because of her youngest son’s developmental delays, she is forced to sit with him for much of the school day in his general education classes, where he typically has a classroom aide.

“You just kind of learn to roll with the punches. I feel like as a mother we adapt,” Ms. Baez said. “If I got to be a lunch lady and a gym teacher and whatever else on top of my law office job, we just do it. Same way we’ve been doing it since 2020.”