This website requires the use of Javascript to function correctly. Performance and usage will suffer if it remains disabled.
How to Enable Javascript
At Least 64 People Confirmed Dead in Kentucky after Barrage of Tornadoes 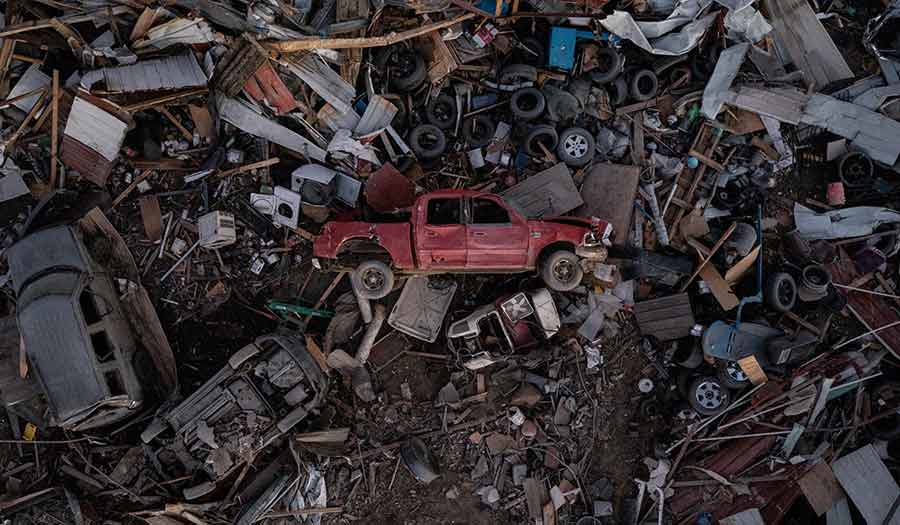 Reuters/Adrees Latif
A vehicle lies on its side in a business lot after a tornado devastated Mayfield, Kentucky (Dec. 13, 2021).

MAYFIELD, Kentucky (Reuters) – At least 64 people lost their lives in Kentucky after a raft of tornadoes tore through six states, Governor Andy Beshear said on Monday.

While the toll from the deadly twisters was lower than initially feared, the governor said he expects the death toll to increase, possibly to 70 or 80 as searchers continue to sift through the rubble.

“It may be weeks before we have counts on both deaths and levels of destruction,” Mr. Beshear told reporters.

Over the weekend, Mr. Beshear has estimated the death toll from the Friday disaster at 80 and likely to rise to more than 100 but held out hope the number of missing at a destroyed candle factory was much lower than previously believed.

On Monday, he said officials were working to confirm that eight people had perished when the factory in Mayfield, a town of about 10,000 in the southwestern corner of Kentucky, was hit in the storm.

Out of the 110 workers who had been toiling at the Mayfield Consumer Products LLC factory, 94 were believed to have made it out alive, according to the owners of the business, the governor said.

“We feared much, much worse,” he said. “I pray that it is accurate.”

In the hard-hit small town, the tornado destroyed not only the candle factory but also the police and fire stations. Homes were flattened or missing roofs, giant trees uprooted and street signs mangled.

Rescue workers resumed combing through debris on Monday in the scant hope of finding more survivors from a battery of deadly tornadoes that tore through six states.

While Kentucky was hardest hit, six workers were killed at an Amazon Inc warehouse in Illinois after the plant buckled under the force of the tornado, including one cargo driver who died in the bathroom, where many workers told Reuters they had been directed to shelter.

A nursing home was struck in Arkansas, causing one of that state’s two deaths. Four were reported dead in Tennessee and two in Missouri.